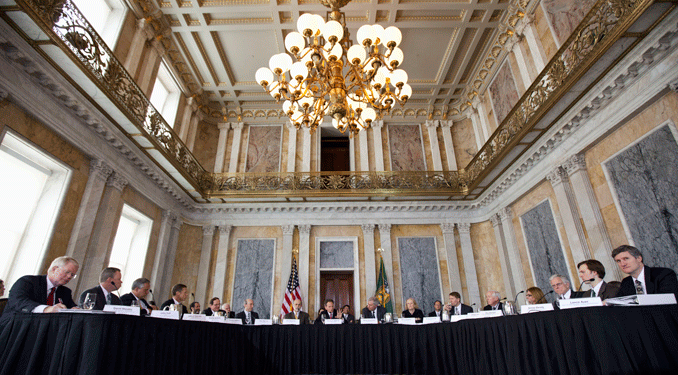 Treasury Secretary Timothy Geithner, center, chairman of the Financial Stability Oversight Council, presides over an April session of the Council in Washington. State insurance regulators say there are not enough people with insurance expertise on the panel. (AP Photo/Manuel Balce Ceneta) (AP)

Congress passed the 848-page Dodd-Frank law two years ago to try to prevent another financial meltdown like the one that sent the economy into a tailspin in 2008. It rewrites many of the federal rules covering banks and insurance companies to prevent businesses from becoming “too big to fail.”

Many of those changes give the federal government more power, and state regulators worry about encroachment onto their territory. The bulk of insurance regulation remains at the state level, but new federal agencies now have a role, too.

For example, the newly created Federal Insurance Office will be looking over insurers' shoulders. The office does not actually regulate the industry, but is supposed to monitor it and recommend improvements. The office was scheduled to publish a comprehensive review of how to “modernize and improve” insurance regulation earlier this year, but the much-anticipated document still has not been released nearly six months after it was due.

Depending on what it says, the report could revive a long-simmering debate over whether insurance companies should operate with a national charter —  something that is not currently allowed — instead of submitting to the rules of individual states.

But the insurance office is only one of several new federal agencies monitoring various components of the financial system, including the insurance industry. Many state officials worry the new agencies will push further and further into what once was almost exclusively state territory.

In this explainer, Stateline examines the insurance aspects of Dodd-Frank, and why state officials are nervous about the changes.

Why was insurance regulation made part of Dodd-Frank?

The short answer is: AIG. The collapse and rescue of American International Group Inc., one of the world's largest insurance companies, became emblematic of the financial collapse of 2008 and a rallying cry for reform of Wall Street.

“Despite regulators in 20 different states being responsible for the primary regulation and supervision of AIG's U.S. insurance subsidiaries, despite AIG's foreign insurance activities being regulated by more than 130 foreign governments and despite AIG's holding company being subject to supervision by the [federal] Office of Thrift Supervision,” Treasury Secretary Timothy Geithner told Congress in 2010, “no one was adequately aware of what was really going on at AIG.”

The firm's ability to avoid scrutiny at both the state and federal levels led to several components of Dodd-Frank being designed to prevent such lapses in the future.

What state-related insurance requirements are in Dodd-Frank?

Perhaps the biggest development is the creation of the Federal Insurance Office (FIO). The office cannot regulate the core activities of insurers, such as rates and coverage requirements, but it can urge changes.

Dodd-Frank requires the new agency, led by former Illinois insurance commissioner Michael McRaith, to issue several reports on improving oversight of the U.S. insurance market. The agency is charged with finding coverage gaps in the existing state-based insurance scheme, evaluating whether minorities are adequately served and exploring whether some carriers might be regulated at a national level.

If it cannot get data for its decisions from existing sources, the insurance office can use subpoena power to gather information directly from insurance companies. Currently the National Association of Insurance Commissioners (NAIC), a group of state insurance regulators, serves as a clearinghouse for industry data.

The head of the Federal Insurance Office also represents the United States on an international body of insurance regulators, which sets standards to make sure international insurers are solvent. That was a role traditionally handled by NAIC, which helped found the international group.

What other changes has Dodd-Frank set in motion?

The law tries to clear up disputes between states about who can tax and regulate custom-built insurance products, called “surplus lines.” These typically occur when a customer in one state wants a specialized product that only an insurer in another state offers. Dodd-Frank says that the rules and taxes for the state where the customer is based will prevail, but that requires states to adopt new laws to make it happen.

When it comes to insurance, what does Dodd-Frank not cover?

There is no regulation of the insurance industry by the Consumer Financial Protection Bureau, the new federal agency charged with advocating for consumers.

The insurance industry and its state overseers object to how few members of FSOC have insurance backgrounds.

What do state regulators and legislators think of the Federal Insurance Office?

They have many concerns. Near the top of the list is the potential for FIO to increase its power, especially because it must offer suggestions to improve the insurance market nationally.

“We hope the report will be honest and factual,” Iowa Insurance Commissioner Susan Voss told Congress last summer, “but we continue to believe there is an inherent conflict in an office of the Treasury Department studying ways to further empower itself.” Likewise, the National Conference of Insurance Legislators (NCOIL), a group of state lawmakers, worries about the potential for “mission creep.”

Could insurers be designated as “too big to fail”?

Yes. FSOC could designate insurers as bearing the type of “systemic risk” that would subject them to increased federal scrutiny. The state regulators' group and the insurance legislators' group both think insurance companies should not be declared too big to fail.

These organizations worry that, under many parts of Dodd-Frank, federal regulators will take rules designed for banks and apply them to insurance companies. They both have repeatedly said state officials do not have enough representation on the newly created federal entities that now are looking into insurance.

Who decides which companies are “too big to fail”?

That decision rests with the 10 voting members of Financial Stability Oversight Council, most of whom come from the federal government. (See sidebar) Only one of the voting members is required to have an insurance background, a bone of contention for state regulators and insurers.

“Clearly, today there is inadequate insurance expertise on FSOC,” said John Huff, the director of Missouri's Department of Insurance, Financial Institutions and Professional Registration, during congressional testimony last fall. As a non-voting member of FSOC,  Huff complained that he had not been allowed to consult with insurance commissioners in other states regarding the council's work.

“Quite simply,” he said, “FSOC should want and the U.S. taxpayers should demand the resources and expertise that their [state] regulators can provide to FSOC's work in protecting the U.S. financial system.”

Federal officials say Huff can consult with his own staff in Missouri but not with regulators in other states.

The legislators' group objects to the fact that no state lawmakers are represented, much less have a vote, on the panel. They were also shut out of the Federal Advisory Committee on Insurance, which advises FIO. “As legislators have the last word on insurance public policy, it seems odd that Treasury and the head of the Federal Insurance Office have neglected to include the vital presence of state legislators on FACI,” Kentucky state Representative Bob Damron said in a statement.