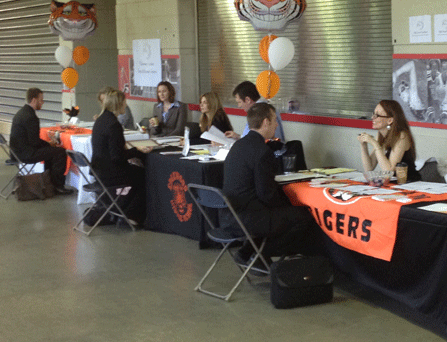 Administrators from Warsaw Community Schools interviewed dozens of prospective teachers at the Ball State University teacher fair in Muncie, Indiana. They were hiring for about 20 positions district-wide. (Ben Wieder)

MUNCIE, Indiana — Every 15 minutes, the buzzer sounds at Ball State University's Worthen Arena. But there's no basketball game. The circular concourse outside the court is filled with 300 prospective teachers and 54 representatives of school districts and private educational companies looking to hire them. It's three days before graduation and students at Indiana's largest-teacher producing college have 15 minutes to state their case to prospective employers before the buzzer sounds again and their time is up.

The students who get hired will enter a profession experiencing major changes in Indiana. This fall, the state will begin requiring that all teachers be evaluated on student performance and that those evaluations help decide whether they get a raise and, ultimately, whether they keep their jobs. Indiana is not the only state making such moves, but from 2009 to 2011, no other state made more changes to teacher policy.

Tony Bennett, Indiana's elected superintendent of public instruction, says there has never been a better time to be a teacher in Indiana. “For the first time, we are actually recognizing and rewarding great teachers,” he says. “We are treating teachers as the professionals I went to college to be.”

These moves come at a time when teacher satisfaction nationally is at its lowest point in more than two decades, according to the annual MetLife Survey of the American Teacher, with more of those in the profession saying they are considering leaving it or fear for the security of their jobs than at any recent time.

The evaluation and compensation changes in Indiana came during a contentious 2011 legislative session in which hundreds of teachers protested laws restricting their collective bargaining rights, making it easier for charter schools to expand and introducing an expansive private school voucher system. Brenda Pike, executive director of the Indiana State Teachers Association, says teachers aren't any happier about the changes one year later.

“They're feeling very vilified,” she says. “They look around and say ‘What did I do to deserve this?'” Pike thinks that as the 2011 law takes effect, the state will see an increase in veteran teachers seeking retirement. At least two district representatives at the teacher fair told students there were more openings because of retirements related to the new law.

A New Model for Teacher Pay

In addition to potentially opening up more jobs, the changes upset the traditional compensation model. Until now, the only factors that have normally contributed to a raise for teachers in Indiana are years of experience and academic degrees earned. Teachers have essentially had a salary schedule and been able to predict what they would be paid years ahead based on their combination of those two factors. Under the new system, performance, instructional leadership and the academic needs of students can be added to the mix and the old factors can't account for more than one-third of the calculation in determining increases. Teachers who are not deemed "effective" or "highly effective" won't be eligible for a raise, regardless of how much experience they have.

Dale Chu, Indiana's assistant superintendent for innovation and improvement, says he hopes the new model will allow young, high-performing teachers to earn raises faster than in the old model, and thus stem high attrition in their ranks. “If we're really serious about keeping our teachers in the profession,” he says, “we don't make them wait that long before they can earn a livable income.”

While most students at Ball State say money isn't a major reason they're entering the teaching profession, Samantha White, a senior from Michigan City, Indiana, admitted that it would make a difference. “That would keep me motivated,” she says.

The new compensation model doesn't come with additional funding, though, so teacher salaries as a whole won't necessarily rise. “You just have more opportunities to earn a raise through different avenues,” says Mindy Schlegel, a senior policy advisor in the state Department of Education's educator effectiveness office.

All teachers will still be awarded raises from the same pool of money for traditional public schools, and Pike, the union leader, worries that pool will shrink over time, particularly as the state spends more on private school vouchers and charter schools.

Will Krebs, director of policy and research at the Department, says that if the new model ultimately yields better student performance and more teachers deemed effective in the classroom, it will be easier to make the case for increased education funding.

“Now we have clear evidence that we're paying for excellence,” he says, “so when you come to the table at the statehouse or with taxpayers, I think it's a much more palatable conversation to say we need more money.”

Teachers will now earn one of four ratings, ranging from “ineffective” to “highly effective,” on the basis of student performance, administrator observations and whatever other factors a district chooses to include. Schlegel says that the new evaluation system will provide younger teachers more support. “They're going to get far more feedback, good or for bad, than any other first-year teachers,” she says.

The state has developed an evaluation model, called RISE, that 70 to 80 percent of districts are planning to use next year, according to the Department. The model calls for two extended observations and at least three shorter observations by representatives of the school administration, with feedback and professional development tied to the results of the evaluation.

Dani Barkey, an assistant principal at Lakeview Middle School, in Warsaw, Indiana, says that while her school is still figuring out how to fit the extra evaluations into the busy schedules of administrators, she's excited to spend more time with teachers in the classroom. “I think that we'll become much closer with our teachers in a coaching capacity,” she says. She was among several administrators from the Warsaw Community Schools looking to hire new teachers at Ball State.

For those potential new teachers, the idea of more frequent evaluations with performance measures isn't particularly daunting. “We've been experiencing this in school,” says Jessica Hall, a Ball State senior from Fort Wayne, Indiana. “It's all we know.”

What does concern Tami Stone, a graduate student from Pendleton, Indiana, is that she could suffer if outside factors, such as an unstable home life, affect her students' performance. “I'm all for accountability,” she says, “but there are a lot of things that are out of my control.”

New teachers will be considered “probationary” until they achieve the highest evaluation ratings, “effective” or “highly effective,” for three years in a five-year period. At that point they become “professional,” but until then, one rating of “ineffective,” the lowest rating, or two of “improvement necessary,” the second lowest, makes them eligible to be fired.

While Indiana's current tenure system hasn't made it impossible for teachers to be fired, the new system will make it easier for all teachers, both new and experienced, to be let go. One ineffective year can bump professional teachers back to probationary status, where another ineffective year can lead to dismissal. The new system also makes it easier for current teachers who have achieved tenure, those considered “established,” to be fired. After two consecutive ineffective years, or achieving one of the two lowest ratings in three out of five years, the veteran teachers could be let go. About all tenure really provides them is an extra year before dismissal can be considered.

Indiana is one of many states that have made major changes to their tenure laws in recent years.

Some, such as Idaho, have done away with tenure entirely. This year, Louisiana made tenure harder to get as part of a series of sweeping education changes.

Under the new Louisiana law, teachers must be rated as “highly effective” in the state's evaluation system for five consecutive years before they can be granted tenure. “We are going to see a shift toward teachers that are non-tenured in the future,” says Stafford Palmieri, an architect of the Louisiana law and policy director for Governor Bobby Jindal. “Tenure has become obsolete.”

For the next class of teachers at Ball State, the question of tenure is a vexing one. Students say they agree that the laws should have been changed to make it easier to remove ineffective teachers, but that they saw tenure as one of the few perks available to them in a profession not known for its lucrative pay.

Jessica Trosper, for one, doesn't think tenure is necessarily obsolete. The Ball State senior from Columbus, Indiana, says she'd like the opportunity to earn it one day, albeit for what she sees as the right reasons. “I would like to have it because I've proven that I'm a great educator,” she says, “not just because I've worked for two years and they've given it to me.”