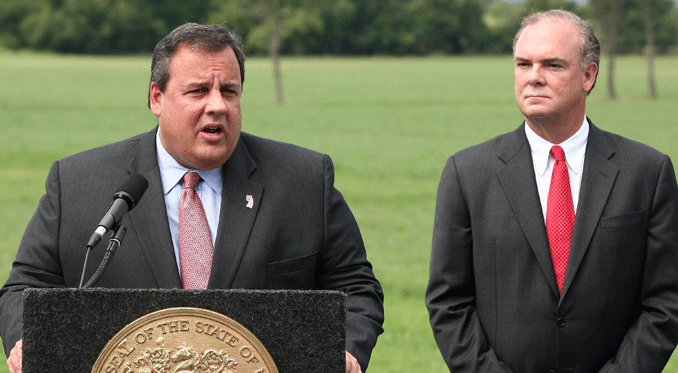 Buried under seven snowstorms in rapid succession, New Jersey communities faced a crisis in January 2011: where to put all the snow that was blocking roads, parking lots, and front doors. Because of the state's strict environmental regulations, dumping the snow in rivers and streams was "not a routinely acceptable management option," according to the state's Department of Environmental Protection (DEP). It wasn't until the northern New Jersey town of Nutley had received almost 60 inches of snow that the department eventually agreed to suspend the environmental rules and allow Nutley and five other north Jersey towns to dump their snow into nearby rivers so that emergency vehicles could move through the streets.

Getting permission to move the snow took longer than it should have, says Larry Ragonese, spokesman for the DEP, and it's an example of a process that could move much faster with a new waiver rule that Governor Chris Christie's administration is seeking to implement in every state agency.

"With the waiver," says Ragonese, "you would be able to cite the public emergency which had been declared, and you could literally seek a waiver (to dump the snow) and get it quickly, rather than getting multiple permits and waiting for multiple divisions to process it." The waiver rule, he says, is one of the ways the agency and the Christie administration are reaching out to "the average guy in New Jersey, the people who talk about government not working, or see government as too big, bureaucratic, and unfeeling."

But environmental groups are doing everything they can to stop the waiver rule, which allows the Department of Environmental Protection to dispense with any existing procedure if applicants can show that it will impose an undue hardship on them, another agency has a conflicting and less strict rule, the project will produce a net environmental benefit, or a public emergency has been declared (as would have applied in the 2011 snow case.)

A coalition of 28 environmental and labor groups is suing the Department of Environmental Protection on the grounds that the agency does not have the authority to simply waive requirements of at least 85 statutes put in place by the legislature as part of 40 years of environmental protection legislation.

"It's an arbitrary attempt to take power and arbitrarily administer it," says Edward Lloyd, the Columbia University environmental law professor who is representing the environmental groups against the agency. Lloyd says that the opposition to the waiver rule is not a rejection of streamlining — it's about preserving hard-won environmental gains.

Lifting red tape and streamlining business regulations was the number one issue for Christie when he took office in January of 2010. On his second day as governor, Christie signed executive orders that froze pending administrative rules, gave all agency heads authority to review existing rules and develop waiver procedures for their agencies, and set up a red tape review commission to examine the actual effects of regulations on the state's economy and businesses.

These "common sense principles," Christie wrote, will "energize and encourage a competitive economy to benefit businesses and ordinary citizens."

Providing a pathway to loosen especially tough environmental regulations was at the top of the Republican wish lists. Wisconsin, Florida and Maine all enacted statutes declaring that environmental protection regulations cannot be more stringent than federal law, language that also appears in one of Christie's executive orders. That standard is based on a model bill, variously called the "pollution control" or "abatement flexibility" act, promoted by the American Legislative Exchange Council, or ALEC, the conservative organization that recently came under fire for pushing controversial "stand-your-ground" self-defense laws.

Is It Too Subjective?

There's a real need for agency flexibility in New Jersey, says attorney Jim Kozacheck, who routinely guides his builder and developer clients through the regulatory process. He says in one instance, he helped a homeowner who bought land in 2004 to build a single family house, and the construction didn't even begin until 2008 because of permit delays.

"In this case, the idea is that maybe you give people a break that deserve a break," Kozacheck says, "rather than holding them to onerous regulations that hurt the economy and the regulated public. Is that subjective? Sure, but it's no more subjective than the old enforcement system."

But to Jeff Tittel, president of New Jersey's Sierra Club and one of the leaders of the lawsuit against DEP, the waiver rule is "part of the polluters' agenda across the country to get rid of environmental protections," and is especially ripe for abuse by developers. He doesn't anticipate that the DEP would necessarily waive air quality standards on a power plant, but that it might allow development closer to streams or through wetlands.

"Development in the state has created pollution and flooding problems," Tittel says, "and that's where I see the most abuse coming from if this rule is in place." He worries that if, for instance, a road is slated to go through marshland, as happened when Interstate 295 was constructed outside of Trenton, developers would be able to get a waiver to sidestep requirements that cause them "undue hardship," such as elevating the highway over the marsh. This would better protect the marshland, but cost more money and make the road project take longer.

Tittel and the environmentalists are not only appealing to the courts to stop the waiver rule. They're also asking the Democratic legislature to weigh in by using an obscure constitutional amendment that allows the legislature to strike down an agency rule if the legislature determines that the rule is not in keeping with the legislative intent behind the law. The coalition is hopeful, since the Senate Environment and Energy committee and the Assembly Regulatory Oversight Committee already have passed resolutions condemning the new waiver rule as "not consistent with legislative intent."

But back at the DEP, Ragonese says the process for getting a waiver might even be more transparent than the current process for getting a permit. Every application will be posted on the department website, and any hearings, updates or decisions will remain on the site permanently.  For the first six months of the program, DEP Commissioner Bob Martin will personally review each waiver application to make sure the process gets on sure footing.

If the rule holds up through the lawsuit, the DEP will begin accepting applications for waivers on August 1. The Division of Consumer Affairs is the next department slated to issue waivers.