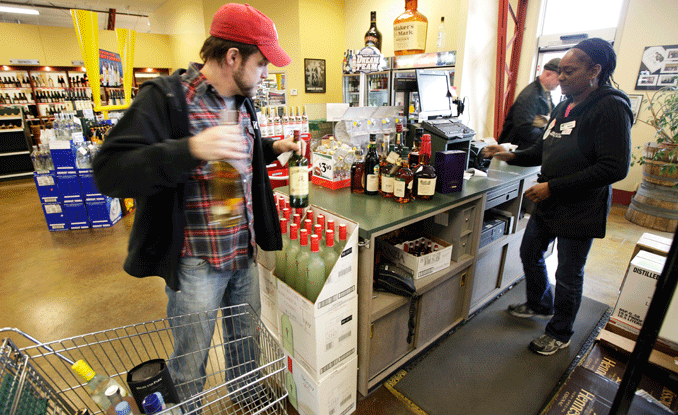 For about a year, Pennsylvania wine-lovers didn't have to go to a state-run Fine Wine & Good Spirits store to pick up a bottle of their favorite cabernet or sauvignon blanc.

They could swing by the grocery store, like Americans in most states, with one major caveat: They had to purchase the wine from a state vending machine. To get their bottle out of the machine, they had to blow into a breathalyzer and wait for a state employee in a central office to verify their identity and sobriety.

The Pennsylvania Liquor Control Board's initial attempt to modernize its retail operations with wine vending machines in grocery stores ended in September after a little more than a year of operation. An audit released last August found that the wine kiosks were inconvenient for customers and took in $1.12 million less than the cost of operating them. They frequently malfunctioned and were shuttered on Sundays, the top sales day for grocery stores.

Eighteen states have an agency charged with overseeing the wholesale or retail sale of liquor or wine, but only Pennsylvania and Utah exert complete control over all such sales. Now Pennsylvania is one of several states grappling with whether to modernize its system or get out of the alcohol business entirely.

Proponents of privatizing retail and wholesale purchases of wine and liquor in Pennsylvania believe the vending machine episode is proof the state doesn't belong in the booze business. “They are free to run their business however they like without any concern for market demands; it's a monopoly,” says state Representative Justin Simmons, a Republican. “They spent millions of dollars on wine kiosks and it was a total bust. It was a boondoggle and a joke.”

Simmons likes to remind people what former Governor Gifford Pinchot said when he created the Pennsylvania Liquor Control Board at the end of Prohibition. “He said that he was going to make the sale of alcohol as inconvenient and expensive as possible, and that's essentially the same system we have today.”

An online campaign from a free-market think tank, the Commonwealth Foundation, at freemydrink.com lays out the case even more bluntly. “Somehow, the PLCB thought customers would like the convenience of blowing into a public breathalyzer and gazing into a state-run camera where an off-site, taxpayer-paid employee verified their sobriety and identity. Turns out, Pennsylvanians like freedom. The ‘Blow and Go' fiasco shows just how inept government can be when they ignore customer needs and try to imitate the benefits of free markets.”

Last November, voters in Washington State approved a ballot measure that will make Washington the first state since the 1930s to abandon its role in retail and wholesale liquor sales. “You've had the same basic structure among the states since the end of Prohibition,” says Leonard Gilroy, director of government reform at the Reason Foundation, another free-market think tank that advises states and localities on privatization. “Not much has really changed on the map.”

Washington auctioned off its state-run liquor stores earlier this month, and it will complete the transition to a private system by June 1. “We've really taken a billion-dollar business with 300 locations and brought it to a screeching halt in less than 6 months,” says Pat McLaughlin, business enterprise director for the Washington State Liquor Control Board. One thousand state employees will lose their jobs after the transition.

However, opponents have challenged the validity of last November's ballot initiative, arguing that it is unconstitutional because it included more than one measure. The state Supreme Court will review the case on May 17.

The ballot measure attracted heavy involvement from business, and Costco poured about $20 million into promoting it. Its chief opponents were wine and liquor distributors concerned about a rule that allows retailers to purchase directly from distilleries. Large retailers are also allowed to warehouse products themselves, further minimizing the role of distributors.

In Washington, smaller retailers could bid for the former state sites that were put up for auction, but only retailers with more than 10,000 square feet of space are allowed to sell liquor at a new location. At the auction, 93 of the stores went to individual purchasers, while 28 went to individuals who purchased multiple stores. The winning bids for stores ranged from $49,600 to $750,000.

Governors and powerful state legislators in other states with strict alcohol regimes have pushed for privatization too, but they have had little success thus far. In Virginia, for example, Governor Robert McDonnell has gotten little traction for his repeated calls to privatize liquor sales, despite making it a centerpiece of his agenda in both 2010 and 2011.

Opponents have highlighted the social and public safety costs of easier access to liquor. And while privatization can give states a quick infusion of cash — Washington made $30.75 million from its recent auction — critics have raised questions about the long-term financial impact.

In Pennsylvania, multiple governors have proposed privatization, and it has been debated on and off for 35 years. Even among Republicans in Pennsylvania, who control both houses of the legislature and the governorship, the idea is controversial because of the negative impact it would have on about 5,000 state liquor workers and their union, the United Food and Commercial Workers Local 1776. Many are also concerned about potential increases in underage drinking and drunk driving.

The Community Preventive Services Task Force, an independent body appointed by the director of the Centers for Disease Control, recommended against further privatization of state liquor operations after a February 2011 review of existing research about the impact of privatization on alcohol consumption. The task force found “strong evidence that privatization results in increased per capita alcohol consumption, a well-established proxy for excessive consumption and related harms.” The task force noted societal harms associated with possible privatization-related increases in hours and days of sale, advertising, increased alcohol outlet density and lax enforcement of rules such as the minimum drinking age.