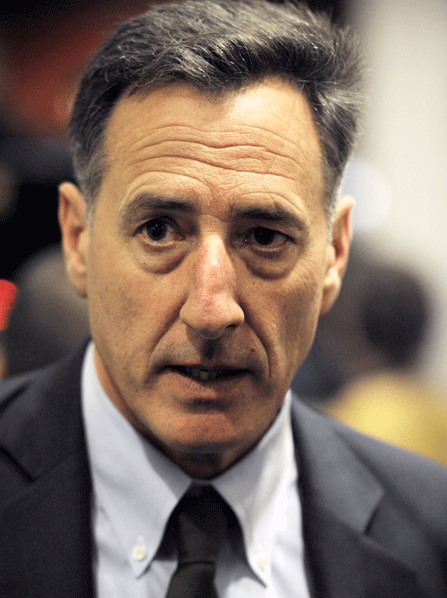 Vermont Governor Peter Shumlin is poised to sign a bill that would ban fracking in the state until at least 2016. (AP Photo/Cliff Owen)

Vermont lawmakers last week made an emphatic statement on the issue of fracking: Not in our state, at least not yet.

In the final vote of its legislative session, the state's House of Representatives overwhelmingly approved a bill that would make Vermont the first state to ban hydraulic fracturing, the controversial method used to extract natural gas stored in shale deposits. The practice, commonly known as fracking, involves blasting millions of gallons of water mixed with sand and toxic chemicals deep into wells, freeing the gas.

Vermont doesn't have any proven natural gas reserves, but geologists say that a shale formation in the state's northwest corner is similar to the gas-rich shale across the border in the Canadian province of Quebec. The possibility that the state sits atop some natural gas adds meaning to a vote on an issue that's been hotly debated across the country and has grown increasingly politicized.

This year alone, 24 states have considered at least 127 bills dealing specifically with hydraulic fracturing, according to the National Conference of State Legislatures. At least seven states have enacted regulatory laws, although none is as strict as the one in Vermont. Meanwhile, rulemaking continues at the agency level in several other states.  Proposed rules deal with a range of issues, including chemical disclosure, protection of water quality and fees on the industry.

All told, 32 states host natural gas drllers, and the industry is looking to expand, as new technology unlocks resources that weren't accessible in the past. Environmental groups say fracking leaves local water supplies vulnerable to contamination — a claim disputed by energy industry representatives, who insist the process is safe and hasn't been directly linked to the pollution of drinking water.

That controversy has sparked numerous studies of fracking's impact on state economies, air and water quality and public health. But those studies, many of which are narrowly focused or agenda-driven, combine to paint a confusing picture of the issue.

The U.S. Environmental Protection Agency is currently studying the effect of fracking on drinking water, but a draft of the EPA's report isn't expected to be released until the end of 2012, and announcements of the agency's initial finding — that the practice may have polluted water in the town of Pavillion, Wyoming — have already proved controversial.

“We don't want to allow [fracking] until we get the science straight,” State Representative David Deen, a Vermont Democrat, told Stateline minutes after casting one of 103 votes in support of Vermont's fracking ban. “The science is very poor at giving us assurances that ground water and surface water wouldn't be contaminated.”

Governor Peter Shumlin is expected to sign the bill, which instructs the state to study fracking's full impact on the environment and on public health until 2016, when the state may revisit the issue.

Outside of Vermont, natural gas-rich states such as Ohio, Pennsylvania, West Virginia, Texas, Wyoming and Colorado aren't waiting to tap into their plentiful resources. Spurred by the promise of adding jobs and tax revenue, policy makers in these and other states have already given fracking the go-ahead. But even there, officials have recognized a need to manage a technology that's transforming the country's landscape.

“This is such a huge issue. It really is a balancing act,” says Jacquelyn Pless, who tracks fracking policy for the National Conference of State Legislatures. “Every state is looking at it differently.”

The natural gas industry has been fracking in the U.S. for decades, but new technology has transformed the process. In the past, companies practiced vertical fracking — drilling straight down and blowing small holes around wells. But the new technique is horizontal fracking, in which drillers bore straight down and then make a turn, giving them access to more rock. That requires the use of more chemicals and more water — up to 10 times as much as is used in vertical fracking.

“This is not like previous drilling regimes,” says Henry Henderson of the National Resources Defense Council (NRDC). “A whole new set of practices brings a whole new set of things that need to be understood.”

James Morton, a state oil and gas regulator in West Virginia, agrees. Horizontal fracking was practiced for several years in West Virginia before the state updated its rules. But in July 2011, Governor Earl Ray Tomblin ordered the state Department of Environmental Protection to issue emergency rules focused on fracking, while lawmakers continued more than a year's work crafting more permanent regulations, which were enacted after a special session.

Neither environmentalists nor drillers wholeheartedly endorsed the wide-ranging policy, which includes regulations on permits, well construction, drilling location and water withdrawals. But Morton says West Virginia is “in a much better position now. The [previous] regulatory framework was not built for this kind of activity.”

Though the federal government has recently moved on two fracking rules — one meant to cut down on methane emissions and a proposal announced just last Friday that would regulate drilling on federal land — natural gas drilling largely falls outside of federal air and water laws.

With such a broad set of fracking-related issues to regulate, state lawmakers have been largely unable to enact rules that both sides can agree upon. That's been the case in Ohio, for instance, where Governor John Kasich — a Republican — has reached out to the National Resources Defense Council, saying he wants to craft regulations that other states might follow.

“We're going to have to have very tough regulations,” Kasich told reporters earlier this year. “We can have economic success in hydraulic fracturing and at the same time preserve the environment. It cannot be a choice of one or the other.”

But environmental groups disagree with the governor's proposed chemical disclosure standards, well depth requirements, and rules that would leave no room for the public to contest a drilling permit. At the same time, industry representatives and some of Kasich's fellow-Republicans are strongly against his proposed severance tax on natural gas, which the governor says would add $1 billion over five years to economically strapped Ohio's general fund, helping the state to pay for proposed cuts to income taxes.

Players on both sides of the fracking issue agree, however, that drilling companies should disclose what chemicals they pump into the ground. Chemical disclosure is this year's most popular legislative trend.

Disclosure is important, advocates say, because it enables medical professionals and those responding to drilling accidents to know what they're dealing with. A lack of disclosure in the past, they argue, has prevented regulators from determining if fracking is linked directly to water contamination. In 2010, Wyoming became the first state to require chemical disclosure, while several other states, including Texas and Colorado, have since followed.

“I think anyone has the right to know what's going into the ground,” says Lisa Brown, a state representative who has proposed a bill that would require greater chemical disclosure in Michigan, where drillers are eying the Antrim shale deposit that stretches beneath most of the Lower Peninsula.

But state disclosure rules aren't simple. Environmentalists and industry officials disagree on what level of disclosure is appropriate. Most state rules, for instance, allow companies to decide which chemicals will be classified as trade secrets and therefore remain undisclosed.

Even Colorado's disclosure law, known as the country's strictest, accommodates trade secrets. It does require companies, however, to justify to regulators why a chemical should be considered "secret" and to reveal its chemical family.

Many companies, such as Chesapeake Energy, voluntarily disclose the chemicals they use, posting the information on FracFocus.org, a website set up by the Groundwater Protection Council and the Interstate Oil and Gas Compact Commission to serve as a clearinghouse for information on hydraulic fracturing. But backers of mandatory disclosure want to ensure those lists are complete.

“It's extremely important,” says Rita Chapman, who coordinates water policy for the Michigan Sierra Club. “We have a lot to protect here.”