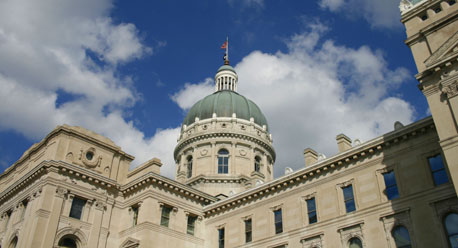 When voters in Indiana's 64th state House district go to the polls today, their ballots will say that James Amick is a Republican primary candidate. But if Southwestern Indiana voters have heard some of Amick's positions on the issues, they might not be so sure.

Indiana Republicans' signature achievement this year was a right-to-work law that unions despise. Amick, a tower crane operator and a member of the International Union of Operating Engineers, opposes right-to-work. Over the last two years, Indiana Republicans also have taken ambitious steps to offer private school vouchers, expand charter schools and allow private operators to take charge of struggling schools. Amick casts himself as a defender of public education and a skeptic about all those moves.

Still, Amick, a 30-year-old Iraq War veteran, says he's no Republican impostor. He's a social conservative, pro-life and in favor of gun rights. He just disagrees with a lot of what Indiana Republicans have been doing lately. “People can see me,” Amick says, “and vote not just their values, but their paycheck also.”

Amick is a member of a nascent group called the Lunch Pail Republicans. In a state where organized labor has felt itself under siege from GOP lawmakers, the concept is to fight back not by electing more Democrats — or at least not only by electing by more Democrats — but by electing more Republicans who are sympathetic to unions. In the Indiana Republican primary today, more than 10 Republicans are running for the Indiana House either under the Lunch Pail banner or with support from the state's largest teachers union, the Indiana State Teachers Association. They are betting that Republican legislators' antipathy for unions and their causes is not shared by rank-and-file Republican voters.

Similar strategies are being tried out by union allies in other states. The 2010 elections brought Republicans to power throughout the country who were eager to challenge organized labor. They've placed both public- and private-sector unions on the defensive. Especially where Republican power appears entrenched, unions are wondering if their best way to regain influence is not to defeat the Republican Party, but to change it from the inside.

The Lunch Pail Republicans came into existence this winter, just as Indiana's legislature was consumed by the debate over right-to-work, the law that will prevent workers from being required to pay dues to unions as a condition of employment. While the Democratic caucus in the House was fleeing the chamber to try to prevent the legislature from acting on right-to-work, the Lunch Pail Republicans were running television ads against the measure. Ultimately, it passed anyway.

The chairman of the Lunch Pail Republicans is David Fagan, who is also financial secretary of the International Union of Operating Engineers Local 150. Despite his union background, Fagan's Republican credentials are extensive. He's been elected as a Republican to the city council in Portage, Indiana, and was appointed to the state's Port Commission by Republican Governor Mitch Daniels in 2007. “I'm not ashamed of that,” Fagan says. “I'm proud of that. I'm not proud of the direction that the Republican Party has gone.”

For decades, labor unions in Indiana have supported Democrats most of the time. Still, it's not unusual for unions to back Republicans. The Operating Engineers, for example, endorsed Daniels twice and strongly supported his decision to privatize the Indiana Toll Road, which allowed the state to pump money into transportation projects.

What is unusual about the Lunch Pail Republicans is that they represent a concerted effort by unions to alter the direction of the Republican Party. The group is supporting seven candidates for the Indiana House in Republican primaries today, including challengers to the chairs of the Education and Labor committees.

House Speaker Brian Bosma, one of the architects of the Republican agenda, views the threat seriously. He says he spent ten years not only building a Republican majority in the Indiana House, but one that would stand with him in favor of ideas such as right-to-work and school choice. “This is definitely an effort to move the House Republican caucus back to the position it was in a decade ago, which was enough folks in the caucus that technically met the requirements of a Republican, but weren't willing to take any action in opposition to labor unions,” Bosma says. “It does constitute an attempt at a hostile takeover from within.”

Despite Bosma's concerns, Democrats may also have reasons to worry. In Indiana and elsewhere, unions have long been key sources of money and manpower for the Democratic Party. If labor turns its attention to electing Republicans, the Democrats risk being left behind.

That's what happened in 2010 in Alabama. The Alabama Education Association, the state's powerful teachers' union and frequent Democratic Party benefactor, supported Robert Bentley for the Republican gubernatorial nomination. Then the group stayed neutral in the general election, rather than support the Democrat as it had four years earlier. Bentley won the general election easily.

Indiana is using new legislative district maps that were drawn by the Republican majority in the legislature, and those maps will make it easier for the GOP to hold its majorities. While Democrats believe they can still win the Indiana House, some political observers expect the maps will lead to further Republican gains. If Republican majorities prove impervious to Democratic challenges, it's possible to imagine a scenario in which unions throughout the state concentrate on influencing Republicans rather than electing Democrats.

So far, that doesn't appear to be happening. Brenda Pike, the executive director of the Indiana State Teachers Association, says her group  focuses mostly on making Republican primary endorsements in districts Democrats have little chance of winning anyway. “I don't think that hurts us,” says Patrick Bauer, the Democratic leader in the House.

Indiana and Alabama aren't the only states where unions are trying a Lunch-Pail type effort.

In New Hampshire, as in Indiana, the right-to-work debate has been one of the central issues in the legislature the last two years. Republicans approved a right-to-work bill but it was vetoed by Democratic Governor John Lynch. Although the GOP possesses supermajorities in both houses, Speaker William O'Brien hasn't been able to muster enough votes to override the veto.

That's partially because of union efforts to find allies in the Republican ranks. Unions helped elect a Republican in the Lunch Pail mode in a House special election last year.

One of the pro-union Republicans is State Representative Lee Quandt, who's more than happy to enter into a war of words with the leadership of his own Republican caucus. “It's really sickening,” Quandt says, “how these people have gone after the working class.”

Quandt is thinking about running for speaker against O'Brien after the 2012 elections. He says he already has perhaps 30 Republicans in his camp, though that's not nearly enough to win the job in a 400-member body where Republicans hold more than 290 seats. But Quandt expects Democrats, who held the majority before their 2010 wipeout, to gain seats in 2012. Some Democrats have said they'll support anyone over O'Brien, which means it's possible Quandt could lead a bipartisan House coalition.

In Indiana, however, the Lunch Pail Republicans aren't likely to seize control of their party's legislative caucuses anytime soon. Brian Howey, the publisher of Howey Politics Indiana, says he expects all Republican legislative incumbents who are seeking another term to win renomination today, including ones being challenged by Lunch Pail Republicans. The labor-supported candidates' best chances are in open seat races, such as District 64, where Amick is running, but victories in those contests are uncertain too.

One reason for that prognosis is that the Republican leadership was ready for the challenge. “This is really from my perspective larger than a battle for the Indiana House,” Bosma says. “This is a battle to show the rest of the nation that you can take these initiatives and move them forward and survive politically.”

Even if Bosma's allies do survive this year, Fagan promises that the Lunch Pail Republicans aren't going away. “This is a long-term commitment to put the party back on focus on what's important,” he says. “This is not short-term, win or loss.”