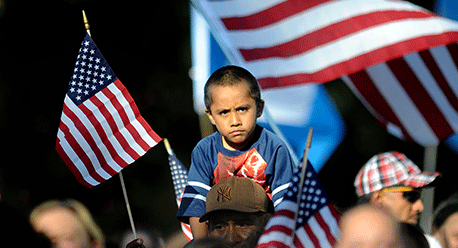 >Moises Beneros rides on the shoulders of another marcher as in Athens, Alabama, during a protest against Alabama's immigration law last October. The legislature is considering changes to the law. (AP Photo/The Decatur Daily, Gary Cosby Jr.)

A year after approving the toughest state anti-immigration legislation in the country, Alabama lawmakers want to revise the law to make it easier to comply with and enforce. But their efforts have rekindled the same emotional fight that was so contentious in the first place.

The ambitious law touches many parts of everyday life in Alabama. It affects police, businesses, schools and churches and those they serve. Many parts of the law are on hold, but most accounts are that it has had an immediate and profound impact: Immigrants and many in their communities have either fled or gone into hiding.

“Word gets out very fast,” says one supporter, Elois Zeanah of Tuscaloosa, the president of the Alabama Federation of Republican Women. “That was the intent of the law. The reason why the immigration law was passed was to reduce illegal immigration through attrition.”

But the Republican architects of the law are already proposing changes.

“Make no mistake; no changes have been suggested that weaken the law,” House Minority Leader Micky Hammon wrote in an email to supporters last week. “Instead, they simply aim to make it even more workable for local governments, more enforceable for state and local police, and less burdensome for law-abiding citizens and businesses.”

The changes are being discussed while nerves are still raw from last year's fight and while last year's law is under a cloud of legal uncertainty. There is no guarantee that changes will leave the law's supporters or detractors happy.

One of the biggest supporters of changing the law is the business community. Companies saw workers leave, customers disappear and their paperwork increase.

“The intent of the immigration law was never to make it difficult for businesses to comply and burden businesses with unnecessary red tape,” the Business Council of Alabama wrote in a statement last month. “These changes, while not perfect, are a much-needed step in the right direction and will allow businesses to clearly comply with both federal and state immigration law.”

In fact, the changes themselves are in flux, with the Republican-controlled House and Senate proposing different amendments. Generally speaking, the House proposal does more to scale back the law, especially provisions that are on shakier legal ground, while increasing some penalties. A Senate alternative leaves more of the original law intact.

The prospect of making any changes to last year's law upset many of its grassroots supporters, including Zeanah. She hopes court rulings will render many of the questions about the law's validity moot. “Any move by our Alabama legislature to change this bill before the U.S. Supreme Court or the 11th Circuit court rule is an attempt, in my view, to weaken this bill before our law can be upheld,” she says.

Like-minded advocates mounted a campaign to try to stop the House changes from reaching the governor's desk, which, Zeanah says, has delayed action on the bill.

At the same time, the changes do almost nothing to mollify critics of the original law, who want the whole thing repealed.

“The modifications they make are really just at the margins,” says Sam Brook, staff attorney with the Southern Poverty Law Center. “They aren't changing the heart or substance of this law in any meaningful way. If these reform bills pass, nothing is going to change, neither in the litigation nor, truly, the harm that's been happening on the ground and the embarrassment that's been reaped on the state because of this law.”

Last week, opponents of the law protested by holding hands in a circle around the state Capitol. Later, police handcuffed and removed pro-immigrant protesters as they sang hymns and tried to block the Senate doors. Two Democratic legislators also joined in the protest but were not carried off. A Democratic effort to repeal HB 56 has not gained traction.

Luther Strange, Alabama's Republican attorney general, originally said lawmakers in his state should wait until the U.S. Supreme Court rules by the end of June on Arizona's anti-immigration law, which shares many features with Alabama's, before making any changes. He later stepped back from those remarks, saying that legislators should not change parts of the law directly in question in the high court case.

“There may be many good reasons for making changes to those sections (not affected by the Arizona case),” he said in a statement, “such as making the law easier to comply with and easier to enforce.”

There are numerous challenges to Alabama's law. Most importantly, a federal appeals court in Atlanta is waiting for the high court's decision before ruling on Alabama's law. The high court challenge centers on four parts of Arizona's law; Alabama has provisions similar to three of those.

Alabama's “stop and verify” law, which requires police to check the immigration status of suspects, is still in effect. Most states, including Arizona, that have passed similar provisions had them blocked in court. Alabama's law also includes provisions that are nearly identical to Arizona's on creating a state requirement to require people to carry proof that they are in the country legally and to make it a crime for someone not authorized to work in the United States to apply for a job.

But the Alabama law goes even further than Arizona's in several aspects. It requires schools to report how many of their students are in the country illegally or have undocumented parents. Alabama makes it illegal for undocumented residents to engage in business transactions. It negates contracts entered into by unauthorized immigrants. It makes it a crime for illegal immigrants to apply for a driver's license, car tag or business license.

When it comes to traffic stops, the Alabama law requires police to bring drivers without proper identification before a magistrate. As a result, Tuscaloosa police arrested a Mercedes-Benz executive from Germany in November, because he had only a German identification card with him while driving. He later produced the passport and German driver's license he had left in his hotel room.

On top of its other challenge, the U.S. Justice Department is investigating a provision of the Alabama law that requires schools to report the immigration status of children when they enroll. The agency is gathering information on whether that part of the law, which was blocked two weeks after taking effect, violates the 1964 Civil Rights Act.

During this school year, the Obama administration's lawyers noted, school absences in Alabama remained virtually flat for whites and blacks but tripled for Hispanics. More than one in eight Hispanic students in Alabama withdrew from school between the start of the school year and February. “We are continuing to evaluate and gather information,” the agency wrote to Alabama's state superintendent, “but the facts described above may implicate the statutes we enforce.”

Justin Cox, an attorney with the American Civil Liberties Union's Immigrants Rights Project, says the schools provision is one reason Alabama's is the harshest anti-immigrant state law in the country. “They're going after kids here,” he says. “No other state has tried to put kids in the middle of this fight… It particularly highlights how cold-hearted HB 56 is as a whole.”

Alabama's law, like Arizona's, will face many more legal challenges even if the high court rules in their favor. The Supreme Court case focuses only on whether Arizona covers ground that only the federal government is allowed to regulate. But there are other issues at play in other legal proceedings. Opponents say the law will lead to arrests without cause, which is illegal under the Fourth Amendment. They also fear the law will lead to racial profiling.

Cox says he has seen evidence of racial profiling in Alabama. The state highway patrol, he says, recently arrested two Hispanic men from a single car and charged both the driver and the passenger with driving without a license. The officer asked both whether they were in the country illegally.

“Situations like this, we hear about all the time, where law enforcement officers are pulling people for suspicious reasons or arresting them for things that are not crimes,” Cox says.

But Zeanah, the head of the Republican women's group, says other states can learn from Alabama's experience. “We showed that if you pass a strict law,” she says, “the illegal immigration numbers will decline immediately through attrition.”