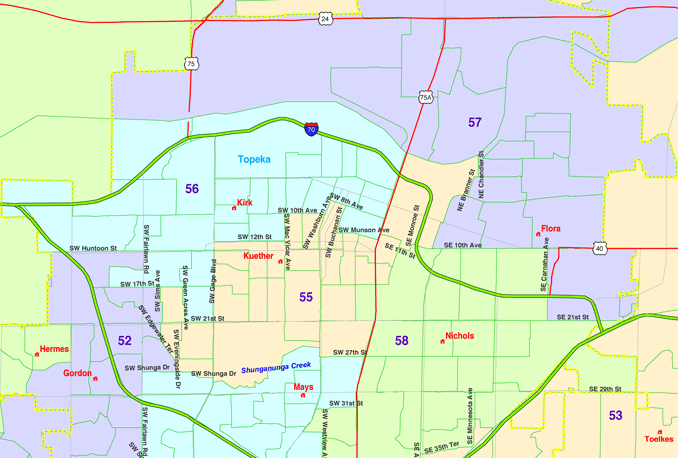 Forty-nine states have congressional district maps that, barring a legal reversal, can be used for this November's elections. Then there's Kansas.

Kansas' legislature is the only one in the country still trying to complete its congressional redistricting responsibilities. It's also one of only a handful of legislatures that hasn't finalized its state legislative district lines, as states wrap up the once-a-decade redistricting process that follows each census.

The delays reflect disagreements between the moderate Republicans who run the Kansas state Senate and the conservative Republicans who lead the state House. If the differences aren't resolved soon, they could begin complicating the timeline for the state's elections this year. The redistricting process has accelerated in the Senate this week, although it's not clear whether the legislature is any closer to a resolution.

The thorniest dispute is over redrawing the state Senate's districts. Moderate Republicans in the Senate face primary challengers from the right this year, including some from state House members who are looking to move to the upper chamber. The success or failure of those primary challenges may depend on how the districts are drawn.

Yet the Associated Press reports that the leader of the House, Speaker Mike O'Neal, remains displeased with the plan. Meanwhile, yesterday a Senate committee advanced a version of the congressional map that's different from the one the House previously approved.

The deadline for both legislative and congressional candidates to file for office is supposed to be June 1, but that date could be pushed back if the maps aren't approved soon. The state's primary elections are August 7.

Some observers say that if the legislative deadlock continues, the courts could redraw the districts. A letter from Attorney General Derek Schmidt supports the view that court-drawn maps are possibility, the Topeka Capital Journal reports.

Yet Kris Kobach, Kansas' secretary of state, has argued that the courts only have the power to accept or reject state legislative maps in Kansas, not to draw new ones from scratch. “Time is running out,” Kobach said in a statement last month, “for the Legislature to finish redistricting in a manner that avoids a constitutional crisis.”