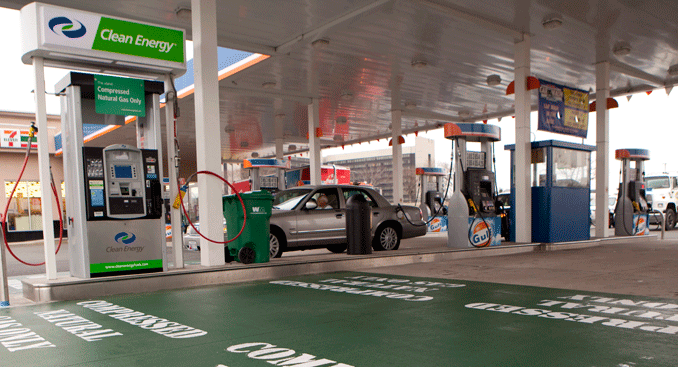 A group of 13 governors is hoping to interest automakers in a plan aimed at boosting demand for vehicles powered by compressed natural gas. It's an effort meant to capitalize on record low natural gas prices at a time when high oil prices cause sticker shock at the fuel pump.

In a letter sent to 19 automakers on Monday (April 30), the governors, led by Mary Fallin of Oklahoma and John Hickenlooper of Colorado, say that a partnership between states and automakers “makes sense and has the potential to create new options for alternative fuel vehicles and transportation fuel diversity.”

The governors' letter comes more than five months after Fallin and Hickenlooper, along with Wyoming Governor Matt Meade and Pennsylvania Governor Tom Corbett, signed an agreement to replace aging state vehicles with new ones that run on natural gas. That effort, the governors say, would reduce long-term state spending on fuel while helping the overall market for natural gas-powered vehicles.

Governors from several other states, most of which are leaders in natural gas production, have since signed on from Utah, Maine, New Mexico, West Virginia, Kentucky, Texas, Ohio, Mississippi and Louisiana.

In February, the group said it planned to buy a total of 5,000 vehicles. The states on Monday sent to automakers a Request For Information, a step preceding the bidding process.

The low price of natural gas has recently fueled excitement about using it to power vehicles, especially as oil prices remain high. Auto manufacturers such as Honda and Chrysler have been slowly rolling out models that run on natural gas, but the market remains tiny. Most of the cars sold in the U.S. are part of fleets. They are rarely purchased by individual consumers, generally because there are few models of the car, and they cost more  gasoline-powered vehicles.

Fuel availability is also an issue. The U.S. has built fewer than 1,000 natural gas fueling stations, according to U.S. Department of Energy data. Many of those stations are available only to fleets, and not to the public. The number is far fewer than the U.S. Census Bureau's estimate of 117,000 gasoline stations in use across the country.

“Despite their potential as a much more affordable form of transportation, CNG vehicles continue to be held back by a ‘chicken and egg' scenario,” Fallin said in a statement. “Consumers won't buy cars with limited fueling stations and high price points; and the industry can't build an affordable car without adequate demand. We can break that cycle by using the combined purchasing power of these 13 states.”

Aaron Cooper, Fallin's press secretary, says the governors are hoping to receive a proposal from automakers by the end of the year. “Oklahoma is a big energy state, and we're happy to take the lead on this,” he said.