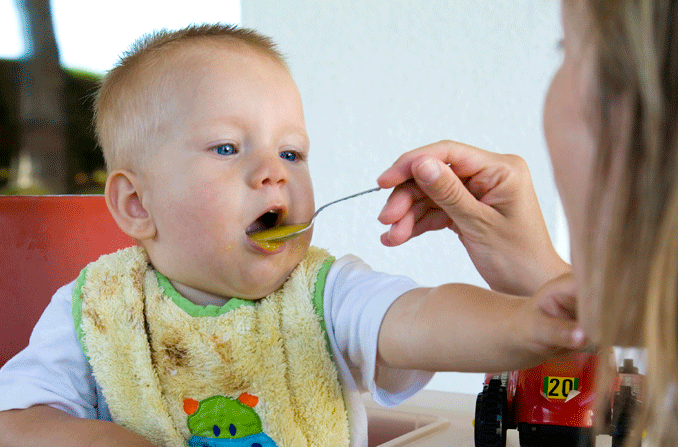 You might expect that a federal program to help needy mothers buy food for their children would be seeing increased participation these days. But the opposite is true..

More Americans are collecting food stamps than ever before, but fewer needy mothers are using another federal government program that offers free baby formula and food for young children.

There isn't one answer to explain the recent decline in the number of women and young children in the program, commonly known as WIC, which the government officially calls the Special Supplemental Nutrition Program for Women, Infants and Children.

It makes sense that more Americans are getting food stamps since that program, known formally as the Supplemental Nutrition Assistance Program, or SNAP, is open to people of all ages who need help recovering from the recession. WIC specifically serves pregnant, breastfeeding, and postpartum women, infants and children up to age 5, a much narrower demographic.  Still, it's puzzling that WIC would be shrinking in these hard times, rather than getting bigger.

Food stamp enrollment is currently at a record 44.7 million, and the Congressional Budget Office predicted this month that the number of people getting food stamps will continue to rise through 2014. But for WIC, enrollment peaked back in August 2009 at 9.3 million. Fewer than 9 million mothers and children under 5 are currently getting help through the WIC program, according to the U.S. Department of Agriculture, which oversees both WIC and food stamps.

Both programs are funded by the federal government and administered by the states and are being targeted by a budget-conscious Congress. “WIC is very vulnerable,” says Douglas A. Greenaway, president of the National WIC Association, which represents WIC providers. Some 700,000 women and children would be taken off the WIC rolls under the House Republican budget resolution while 800,000 would lose out if Congress can't reach agreement and enacts automatic across-the-board cuts in 2013.  “We are concerned about the consequences,” Greenaway says. But those prospective issues don't explain the current decline in WIC participation.

A fall in the overall U.S. birthrate might explain some of the numbers — it would, after all, mean fewer women and infants eligible for the WIC program. The U.S. birth rate indeed dropped 4 percent from 2007 through 2009 and is believed to have fallen an additional 3 percent during 2010. Fewer births not only affect WIC's infant participation, but also its enrollment among women, because they must be pregnant, breastfeeding, or postpartum to receive program benefits.

But the birthrate is just one explanation.

Some advocates worry that needy mothers aren't bothering to enroll in WIC or are dropping out of it because food stamps are easier to get and easier to use. Food stamps are now provided on an unobtrusive debit-like card, whereas states have until 2020 to provide WIC benefits that way. In many states, WIC benefits are still given as vouchers.

WIC applicants also have different hurdles to clear before they can get their benefits. For example, they must be seen by a health professional such as a physician, nurse, or nutritionist who determines whether the individual is at nutrition risk.  Sometimes the applicant must go to a WIC clinic for a free examination; in other cases the information is obtained from the family's own doctor.

When the recession hit, there was a coordinated government effort to sign people up for food stamps, but that didn't happen with WIC. “In some cases, outreach wasn't a priority,” says Geri Henchy of the Food Research and Action Center, an advocacy group in Washington, D.C.

Perhaps more important, food stamp benefits can be more generous, especially lately thanks to the federal stimulus package of 2009. In that law, Congress raised the maximum food stamp benefit for households with three members, for example, to $526 a month, from $463, and it will stay at that level until 2014. The average American on food stamps today gets $134 per person a month. The average monthly WIC is $47. Benefits for infants under WIC are better: typically $100 for the infant and $50 for the mother.

“A mother has to make a decision whether it's worth it,” says Henchy. “In some places, it's a hassle to sign up,” particularly in some offices that have cut hours because of state budget cuts and furloughs.

Idaho is among the states with the biggest drop in WIC participation, nearly a 5 percent decline in the last year. Tom Shanahan, a spokesman for the Idaho Department of Health and Welfare, attributes the drop to both the declining birth rate and a declining schedule of benefits as children get older. In Idaho, the WIC food package for a formula-fed infant averages $140 per month, while a package for an older child is much lower, averaging $52.50 per month. Similar numbers apply in other states as well.

Additional paperwork also may play a role in mothers dropping out of WIC. Benefits for infants are good until the child turns 1 year old, but children over the age of 1 must be certified every six months. “This adds a little more work for families to continue in the program if they have to recertify every six months,” Shanahan says.  Recent changes in federal regulation allow states to certify children for one-year periods, and Idaho is pursuing this, he says.

And finally, another reason for the wide difference in the enrollment for WIC and food stamps could be that the federal government pays for them differently. WIC is a “discretionary” grant program, meaning that Congress decides how much to allocate to the program every year and program officers must live within that budget. Food stamps are an “entitlement” that is provided to all eligible recipients who sign up, regardless of the budgetary cost, unless Congress makes changes to the program.