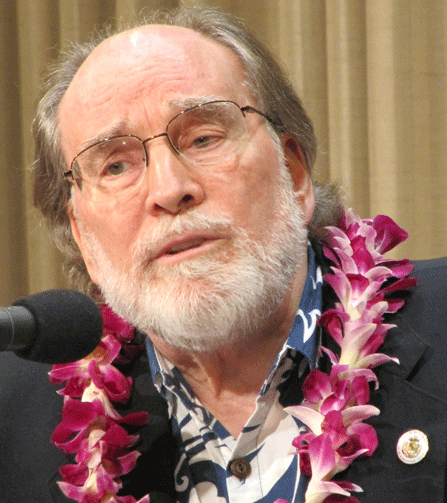 Hawaii Governor Neil Abercrombie has been among his state's strongest supporters of finding new money for alternative energy programs. (AP).

Hawaii in recent years has been good to the solar industry, and that's not just because the state's geography promises a steady supply of rays.

Aided by a slew of generous tax credits to homeowners and companies, including up to 35 percent returned to homeowners who buy and install solar energy units, solar business on the islands is booming. The number of installations of solar energy projects doubled between 2009 and 2010 and has since continued to grow. Those projects account for some 15 percent of construction spending in the state, putting about 2,000 Hawaiians to work.

Meanwhile, the cost of manufacturing and installing solar panels continues to fall, as solar technology slowly gains a foothold in the national energy market. And in a state that imports most of its energy, with residents paying several times the national average for oil and natural gas, the emergence of a domestic fuel source is good news.

But despite those gains, neither solar nor wind power is yet on equal footing with fossil fuels. And growth in the renewable energy sector could soon fizzle. Amid Hawaii's ongoing budget issues, lawmakers aren't sure they can afford to keep offering such generous incentives for solar power. In 2011 alone the state gave up about $40 million in revenue through the tax credit program.

So in the waning days of its current session, the Hawaii Legislature is trying to hash out the details of a program that supporters say would help the state to get a better return on the money it puts toward renewable energy, leveraging the remnants of federal stimulus funds alongside private investments and perhaps state bonds.

Both the state House and Senate have passed versions of a bill that would create what its authors call a "clean economy bank," an independent authority that would provide capital to solar and other renewable energy companies, mostly through low-interest loans. The institution wouldn't be a bank in the traditional sense — it would lack a conventional charter — but it would seek to attract investments from a variety of sources, and its board, made up of banking and industry officials, would loan capital for projects it views as low-risk.

The idea has been hailed by advocates of renewable energy, who have been trying unsuccessfully to pitch a federal program in gridlocked Washington. The developments in Hawaii, as well as the Connecticut Legislature's near-unanimous approval last year of a similar program, have sparked optimism in the renewable energy sector that states will support the industry as federal funding fades.

Federal spending on renewable energy technology is expected to total $16.1 billion this year, about half its level in 2011, according to researchers at the Brookings Institution and the World Resources and Breakthrough institutes. Much of that money was granted to states in the form of now-disappearing stimulus dollars. All the while, most of the pro-renewable energy policies enacted in 2009 will sunset in the coming two years.Those conditions, coupled with market pressure from the thriving natural gas industry, threaten to drastically shrink a sector that had been growing.

In the meantime, states are stepping in, but their meager resources can't match the funding once doled out from Capitol Hill. "You've got to figure out how to make the money go farther," Milford says.

That means moving away from providing simple grants and subsidies. It's what energy officials in Connecticut are aiming to do nearly one year after Governor Dan Malloy signed a bill that created what energy officials dub the "Green Bank," or more formally, the Clean Energy Finance and Investment Authority.

Like the proposed fund in Hawaii, Connecticut's semi-independent authority isn't a chartered bank, but in some ways it acts like one, seeking to leverage capital used to finance energy projects through low-interest loans — without tapping into the state general fund.

The investment authority says it will earn at least $30 million per year, much of it coming from fees on electric ratepayers and revenue from carbon trading auctions within the 10-state Regional Greenhouse Gas Initiative. On top of that, the authority seeks private investors.

"The goal really is to leverage private capital," says Dan Esty, commissioner of the Connecticut Department of Environmental Resources and a professor of environmental law on leave from Yale. "There needs to be a definitive shift away from subsidies towards a private market model."

The Connecticut authority has already made loans to several renewable energy developers, which, Esty says, stoke job growth in the renewable energy industry. He adds that the authority's 11-member board tends to favor projects that produce energy at the lowest cost, with hopes of lowering rates across the board. "We don't want to pick a winner," says Esty. We want there to be competition in the marketplace."

The Connecticut program was a large influence on Hawaii's proposal, and renewable energy advocates hope it will catch on in several other states. Ken Berlin, a policy expert with Coalition for Green Capital, the Washington, D.C.-based group that helped design the state legislation, says as many as 10 states, including New York, California and Ohio, are taking hard looks at the model.

Berlin says the prospect of creating a so-called "bank" needn't be daunting for states. "We're not asking for new funds," he says. "We're just asking to re-appropriate funds." Milford, of the Clean Energy Group, agrees, adding that some states could achieve similar goals outside of the "bank" model.  "States can do many of these things through existing institutions," he says.

And they are. Many states that lack a centralized clean energy authority have created revolving loan programs for investment in energy efficiency. Overall, more than 20 states combine to raise about $500 million each year for such projects, according to a report released by clean energy reseachers in January. The money has helped finance more than 72,000 projects that generate renewable energy or increase efficiency.

Oregon is one of those states. In 2010 it funded about $14 million worth of energy efficiency projects, with some of that money coming from its Small-Scale Energy Loan Program, which has been in place since 1981. The state has also used bonds to finance projects, a method several experts say is underutilized at the state level. "We have the basket of tools available to move forward on a lot of these things," says Scott Nelson, an economic advisor to Governor John Kitzhaber.

Clean energy advocates hope that increased state involvement in funding will help lower the cost of the technology across the board. "We're looking for economies of scale," says Jules Bailey, an Oregon state representative who has pushed several energy efficiency bills in Salem. That goal prompted Bailey to fly to Honolulu last month — on his own dime — to testify on behalf of the clean energy bill.

"It's good to see other small states looking to be innovative," he says. "It makes sense for us to work together."