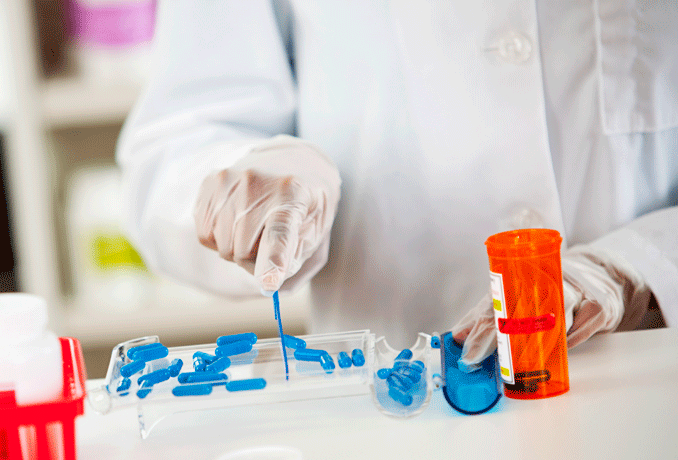 No one disputes the need for more information about prescription drug abuse. But who should have access to the information is a divisive issue.

Dr. Shawn Jones, an ear, nose and throat surgeon in Paducah, Kentucky, was conducting a routine office appointment when he got a phone call from a worried pharmacist. The pharmacist had just received a prescription from Jones for 90 Percocet pain pills, an unusually large order for a doctor who rarely prescribes more than 20 pills at one time.

Jones asked the pharmacist to fax over the prescription, and he immediately recognized it as a forgery. It was for a female patient he hadn't seen in five years. She had somehow gotten hold of one of his prescription pads. Jones asked the pharmacist to delay filling the prescription, went back to the exam room and talked with a policeman who happened to be in the office at the time. The policeman called in to the precinct to have the woman arrested.

Under Kentucky's current prescription drug laws, only a vigilant pharmacist could have stopped these fraudulent prescriptions. The regulations don't allow physicians to monitor their own prescribing habits to check for fraud, and the Kentucky board of medical licensure can look up a prescribing record only if a formal complaint against a physician is filed.

That will change under new legislation passed last week in a special session. To deal with the growing problem of prescription drug abuse, Kentucky legislators enacted tougher regulations on doctors and pain management clinics. The law mandates that all physicians and pharmacists who prescribe schedule II and III drugs, such as oxycodone (OxyContin) and hydrocodone (Vicodin), check the patient's prescription record before writing or filling a prescription. They also have to register prescriptions for those drugs in a state database within 24 hours of writing or filling the prescription.

Currently, only about 25 percent of the states' doctors use the database.  Now, all of them will be expected to.

All of this may not sound very controversial. But it is. The database can also be a tool for law enforcement investigations, and these agencies want as much access to it as they can get. This has created a debate about how to balance patient privacy and law enforcement needs in fighting a serious criminal and public health problem. In Kentucky, the attorney general wanted to take control of the expanded database from the Cabinet for Health and Family Services, where it's been housed since its creation. But in the last hours of the legislative session, the attorney general's office lost that argument as a result of patient privacy concerns.

Similar arguments have been taking place in states all over the country. In Vermont, which has recently had a surge in prescription drug abuse, Governor Peter Shumlin has supported law enforcement agencies that want expanded access to the state's database, over the objection of civil libertarians and patient advocates who secured the legislature's promise in 2006 that the database would only be a public health tool.

“We need to be able to go into this database and identify where there are abnormal prescription uses and trends and get to those people,” said Keith Flynn, Vermont's public safety commissioner, in an interview with WCAX-TV, “not because we want to get to them quicker to arrest them, but to identify needs and help them break the cycle of their addiction.”

Changes to the law would allow an investigation into illegal prescription use to start following a tip from a healthcare provider, and law enforcement officers could then access the patient's information without a warrant. This warrantless access to personal digital data is a slippery slope, says Allen Gilbert, executive director of the Vermont Civil Liberties Union, who worries that the police could simply go on a “surf and click” investigation. “The discussion,” Gilbert says, “really is about what kind of access the police will have to electronic personal health information.”

A potential compromise has been floated that would allow the police to request information from the database without a warrant by getting permission from the state health department. A bill to establish that process is currently working its way through state Senate committees.

Debates surrounding the expansion of the database underscore the program's overall effectiveness. There's a nationwide study comparing effectiveness of state programs underway at the University of North Carolina at Chapel Hill, and early assessments show that databases reduce doctor-shopping and change prescribing behavior in jurisdictions where they've been introduced.

A recent article published in the journal Pain Medicine reported that the databases facilitate a relative decrease over time in prescription drug misuse, despite state differences in program administration.

A 2010 evaluation of Kentucky's database showed that 90 percent of doctors who consulted it found it to be an effective tool in preventing drug abuse and doctor-shopping. The analysis also found that the database did not have the “chilling” effect on patient care that many doctors initially feared, and may have increased doctor confidence in making prescribing decisions.

But legislation can only go so far to stop the prescription drug abuse epidemic, says Sherry Green, chief executive officer of the National Alliance for Model State Drug Laws. “I think people sometimes forget,” Green says, “that [the database] is only an information tool.  If you don't have the other pieces in place, like drug treatment resources, psychiatric services or job counseling, the database is not going to solve the problem.”

Legislating against abuse of prescription drugs is especially difficult, Green says, because legitimate use of the drugs is encouraged and privacy is an integral part of the doctor-patient relationship protected by other areas of the law.

In most cases, Green says, “[legislators] are not doctors or health professionals, and the professional patient relationship is a very sacred relationship that involves a lot of individualized assessment.  That is one of the reasons why we see some of struggles about where the line is [between public safety and doctor-patient confidentiality].  It can be very difficult to draw that line when putting words on a page.”