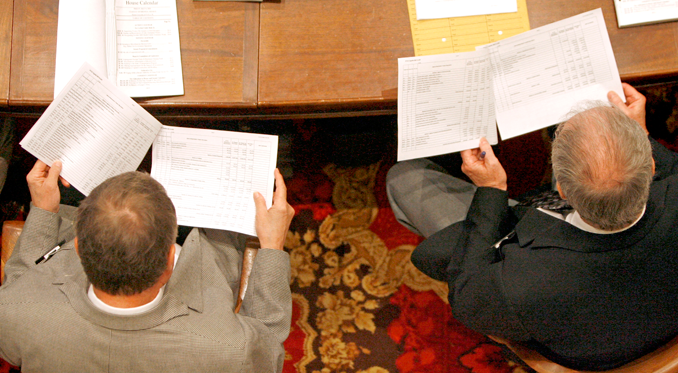 Vermont legislators pore over spreadsheets in the House chamber as they examine a recent state capital budget.

When Vermont lawmakers finalize their budget in the coming days or weeks, interested citizens will learn quite a few important things about how the state spends its money. But there are some things they won't learn.

For example, the document will report on funding for the state's food stamp program. But it will leave out another way the state tries to fight hunger: by exempting food purchases from the state sales tax. Funding for the University of Vermont will be in the budget, but not the property tax exemption the school enjoys. The state's housing agency will be in there. The mortgage interest deduction will not.

In this way, Vermont is typical. Budgets advance state objectives by spending the money the treasury collects. What they don't usually do is decide how the state will advance the same objectives by not collecting money in the first place.

The end result, many lawmakers and outside experts agree, is that these sorts of tax expenditures— exemptions, deductions, credits  and other diversions from regular tax rules — don't get the same scrutiny from legislators that conventional spending programs do. Budgets must be rewritten every year or every two years. Tax expenditures usually exist in permanent laws that change only when lawmakers take affirmative steps to change them.

As a result, tax expenditures have often been ignored over the years, though that's starting to change. Interested citizens from across the ideological spectrum would like to target tax expenditures for their own purposes. Some on the left make the case that states could use the money to restore cuts to core government services. “Funding for education and health care and other priorities was slashed heavily,” says Andy Nicholas, a policy analyst with the Budget and Policy Center in Washington State, “while tax breaks remain unscathed.” On the right, removing tax expenditures is a way to pay for a reduction in tax rates, while creating a simpler tax code.  Kansas Governor Sam Brownback's tax cut plan this year was built on eliminating tax expenditures.

Some states are beginning to review tax expenditures in a more systematic way. Arizona, Idaho, Iowa, Massachusetts, Missouri, Oklahoma and Washington have all formed temporary commissions or permanent committees to look at tax breaks.

States generally haven't tried the most direct approach, however. If the problem is that tax expenditures aren't considered in the budget process, why not consider them in the budget process? Vermont has taken some initial steps in that direction. In doing so, officials there have begun to contemplate whether it's really possible or desirable to write budgets that include tax expenditures alongside conventional spending programs.

So far, Oregon is the state that likely has gone furthest to make tax expenditures part of its budget process. In Oregon, all the state's tax credit programs expire regularly under a 2009 law, just as regular spending expires when the budget cycle is up. The difference is that each tax credit is on a six year-cycle, with one of three groups of the credits expiring every two years.

When the first group was scheduled to expire last year, these “sunsets” put the tax credits on similar ground to conventional spending programs. As the Pew Center on the States (Stateline's parent organization) documented in a report earlier this month, the Oregon Legislature held extensive hearings on the expiring measures, then approved legislation that dictated which credits should continue and in what form.

These decisions were made in the context of the budget. Extending all the expiring credits unchanged would have cost $40 million in the next biennium, but, with the state facing a shortfall, legislative leaders decided early on that they would cut the cost to $10 million. The state ended up totally revamping its controversial Business Energy Tax Credit to cut tax expenditure costs. Key Democrats and Republicans alike deemed the process a success.

Even Oregon's process, though, only covers tax credits, which are just one part of the tax expenditure universe. Billions of dollars of tax expenditures in Oregon aren't subject to review, just as in other states. Many states include sunset dates for at least some tax expenditures, but they don't exist consistently.

A Vermont law seems to contemplate something far more comprehensive. The law says that at the same time the governor submits his regular budget, he must also submit a budget for tax expenditures. Then, the law says that the legislature's finance committees are supposed to make their own recommendations on the tax expenditures “in bill form.” The concept, says Jim Reardon, commissioner of the Vermont Department of Finance and Management, was that when balancing the budget legislators could pick between cutting spending or cutting tax expenditures.

That step alone doesn't make Vermont different from other states. What makes Vermont unusual is what happened next. The House Ways and Means Committee held hearings to study the tax expenditures under consideration this year. “It's not an effort to repeal them,” says State Representative Janet Ancel, who chairs the Ways and Means Committee. “It's an effort to understand them.” She points to a property tax exemption for fraternities and sororities: She wonders what lawmakers were trying to achieve when they enacted it years ago.

After the hearings, the House passed a "Tax Expenditure Budget Bill" affirming existing tax expenditures. That measure was purely symbolic — the tax expenditures would have continued whether it passed or failed. The point, Ancel says, was to acknowledge that tax expenditures are an important part of the state's overall budget picture.

The law and the House's action have led officials in Vermont to contemplate the political and practical challenges to making tax expenditures part of the budget process. What if tax expenditures did expire with every budget and lawmakers had to act if they wanted them to continue?

Reardon says that may not be possible for all tax expenditures. “The concept makes sense, but I'm not sure from an implementation standpoint it's quite that easy,” Reardon says. “When you make a commitment for a tax credit, that tax credit may extend over several fiscal years.” For example, Vermont stopped new companies from entering the state's Economic Advancement Tax Incentive program after 2006. Yet, under EATI's rules, companies had until 2010 to meet job creation and investment goals to earn credits, then five more years to actually use the credits. The end result is that companies that entered the program prior to its demise could be eligible for tax breaks through 2015.

Nor is Stephen Klein, the Vermont legislature's chief fiscal officer, sure that moving precipitately in this direction would be desirable. He says that continuously reviewing tax expenditures comes with a trade-off: Individuals and businesses couldn't be confident that key parts of the tax code today would exist tomorrow.  “A lot of the strength of a tax code,” Klein says, “is one that's somewhat stable and things don't change all the time.”

What supporters of the concept say in response is that just because tax expenditures would expire, that doesn't mean that all of them would be at serious risk of vanishing each budget cycle. Nicholas, in Washington, makes an analogy to education spending. Lawmakers must reapprove it with every new budget, but politically and constitutionally it's impossible to imagine the state ceasing to fund schools. In Washington, a bill passed the House Ways and Means Committee this year that would sunset most tax expenditures in stages starting in 2017, but the legislation didn't get further than that.

In Vermont, Ancel says she isn't ready to support sunset dates for all tax expenditures. For now, her focus is on getting better cost estimates on tax expenditures and studying the purposes behind them.

Getting that information will take time. “I think the good news is there's probably a lot more conversation about the issue,” Klein says. “I can't tell you we've found nirvana.”