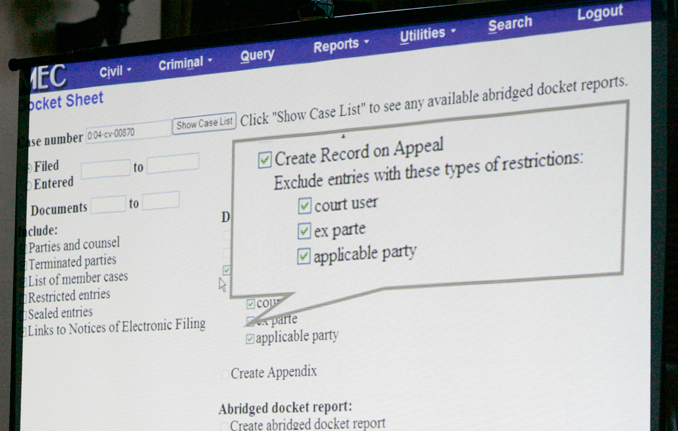 When lawyers bring a case before the Texas Supreme Court, they don't just have the option of filing their documents electronically; they are required to do so. That's how far the Texas court has gone toward converting itself from a paper-intensive to a paperless operation.

It hasn't been easy. Some of the judges still insist on taking the electronic documents and printing them out to read page-by-page. “We are in a profession that likes its traditions, and I think that adds to some of the resistance to change,” says Blake Hawthorne, the court clerk.

And the process still has a long way to go. Even through the electronic record has become the official record, parties in a case are still obligated to print out and send in at least a few copies of most types of documents the old-fashioned way. Far fewer copies are required than before, but the volume of paper weaving its way through the court remains substantial. This is in part to meet the needs of the justices who haven't been as quick to adapt to a paperless way of doing business and partly to deal with the fact that Texas state government doesn't yet have an electronic records preservation program. “There is an issue as to how one is going to be able to turn over electronic records to the state if they don't have the ability to take them from us,” Hawthorne says.

Still, the change is happening,  and it will not be reversed. “With electronic filing,” says Hawthorne, “you can do anything that you can dream up, it's all just a question of how you're going to pay for it. That's the reality that quite a few states are dealing with right now.”

The new electronic system in Texas uses a fee-based model in which private sector providers act as electronic couriers and a centralized service provider is a sort of electronic post office.  Around the country, private sector companies are willing to pay many of the upfront costs  of building electronic court filing systems in the hopes of eventually making their money back — and then some — through fees.

And the fact is that most state judiciaries are now moving toward electronic filing, although with dramatically varying degrees of speed and sophistication. Some electronic systems simply allow litigants to email files to the court. Others automate a host of judicial functions,  such as sending notices to other involved parties when a document has been filed or a judge has taken action on a case.

According to the National Center for State Courts, statewide electronic filing is up and running in Delaware, Colorado, Alabama, Utah and Nebraska, with a number of other state judiciaries phasing in systems that are intended to go statewide eventually.

The timeline for phasing in electronic filing is accelerating, says James McMillan, a technology consultant at the National Center for State Courts. While the mandatory federal electronic system PACER took the federal judiciary 14 years to implement after it launched in 1996, Alabama was able to take its system statewide in just a year, he says.  Court systems where electronic filing is optional rather than mandatory are seeing higher-than-expected participation rates right after launch. “The uptake is getting faster,” he says. “Everyone is getting more comfortable with the technological environment."

The Pulaski County Circuit Court in Little Rock last month became the first court in Arkansas to allow electronic filing, and already has a 10 percent participation rate. Through a pilot project, the court will gradually phase in electronic filing for all case types. To speed the transition, the clerk's office is digitizing and electronically filing every piece of paper that comes across its counter. "Every case, every document filed in civil, domestic and probate cases is being electronically filed — whether by an attorney remotely or by the clerk," says Tim Holthoff, director of court information systems for the Arkansas Administrative Office of the Courts.

While building an electronic filing system can be expensive, the potential for long-term cost savings and efficiencies is also the primary driver of adoption. Chief Justice Linda Dalianis of the New Hampshire Supreme Court says ongoing budget cuts have forced the realization that operating on an old-fashioned business model is no longer a viable option. Since July 2010, New Hampshire has been forced to reduce jury trials by a third in both civil and criminal cases—with jury trials now being held only eight months of the year—leading to persistent backlogs.

“We started to pick out ways in which we could start from scratch and rebuild the judiciary for the 21st Century,” Dalianis says. A Judicial Branch Innovation Commission took a comprehensive look at the system and recommended sweeping structural and operational changes, including making the 70 courts scattered across the state paperless through a complex series of integrated technological projects. The legislature has appropriated $5 million in capital investments toward the project, with promises to bring the state $2 million in combined revenue and savings annually after it is up and running.

New Hampshire's project goes far beyond simple implementation of electronic filing. It involves a complete overhaul of court operations.  “We're only going to have humans doing tasks that truly can't be automated,” says Peter Caradonna, project manager of the NH E-Court Project. “That raises the risk and complexity quite a bit in comparison to what other jurisdictions have attempted.”

Judges and court administrators began training a few weeks ago on how to use new hybrid laptop-tablet devices that will be employed both on the bench and in court offices. The devices come with a stylus that can be used to write on electronic documents and to call up case files and issue orders.

Many Nebraska judges had been having difficulty keeping up with default judgments —uncontested civil cases under $51,000 — because  of the need to drive to and from courtroom to courtroom across the sprawling state to manage the workload. Judges who oversee multiple rural courts would often be greeted with stacks of default judgments that they would have to sit down and work through before driving to the location of their next case. ”One of the reasons the judges like [the new system] so much is that they can go into all of the default judgments and they can sign,” says Janice Walker, Nebraska's state court administrator. “That causes the file to be updated in our system and emailed to the attorney. Once the judge does that, they can dispose of cases in all of their different courts."

Criminal cases have been more difficult to convert to electronic filing than civil cases because filing fees do not cover the costs. In many criminal cases all of the parties involved are government entities. Nebraska has found a workaround arrangement with Nebraska.gov, a company that paid the upfront costs of building and running a system and also operates its state web portal, and plans to launch electronic filing for criminal cases in June. “For each electronic filing, we get a $1 transaction fee from the state,” says Brent Hoffman, general manager of Nebraska.gov. “Civil basically pays for criminal.”

The Superior Court of Maricopa County in Arizona began moving toward electronic filing in 2002 for a very simple reason: “The paper was so much that we were running out of space,” says Aaron Nash, special counsel to the clerk.

The court now requires electronic filing for most civil cases and many of its judges have fully adapted to a paperless way of life. “It depends judge by judge and their comfort level,” he says. “Some of them went electronic and never went back. Some use their own personal iPads. There are some who are more old school and they'll have their staff print what they need by paper.”

“That becomes a budget issue for the bench,” he says. “We tell them, ‘Just know that it's available to you electronically.'”