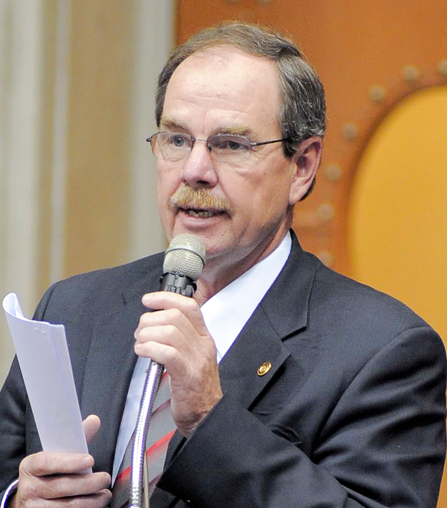 Missouri state Representative Rodney Schad authored legislation to reduce the number of people on the state's public sex offender registry, which he says has grown too large to be useful. (Photos courtesy of Tim Bommel and the House Communications Office).

Over eight years in the Missouri House, Republican Representative Rodney Schad has gotten numerous phone calls, letters, and emails from registered sex offenders and their families about the damage the registry has caused in their lives — the harassment, persistent unemployment, and community ostracism. Three years ago, Schad decided to start researching the state's registration policy, and what he found surprised him.

"There's no way to tell who's dangerous and who isn't," says Schad. "[People] look up their address and see 10 offenders living or working near their house." In his view, the list is becoming bloated and less helpful to ordinary citizens than it should be.

To try and refine who actually shows up on the public registry, Schad crafted legislation to create a tier system so that only the most dangerous offenders are listed publicly. Currently, anyone convicted of any type of sex crime, from public urination to child molestation, is placed on the list.

The bill also creates an appeals process so that offenders can petition to be removed from the registry after 10 or 20 years, depending on their crime, and removes all juvenile sex offenders tried in juvenile court from the public registry. The bill has passed the Republican-led House of Representatives both this year and last year with bipartisan support because, Schad says, "every one of our representatives has these offenders in their districts." It remains to be acted on in the Missouri Senate, which has not concluded its 2012 session.

This proposed change to Missouri's registry comes just as the state has moved into compliance with the federal Sex Offender Registration and Notification Act (SORNA), a portion of the Adam Walsh Act passed by Congress in 2006. That law is aimed at protecting children from predators by collecting sex offender data in a national public registry and requiring those people listed in it, including juveniles, to report their movements to law enforcement.  But even though the federal compliance deadline has passed, only 15 states have substantially complied. (Missouri is one of them.)

Many states have decided not to comply because their legislators oppose lifelong registration for some juvenile sex offenders, one of the requirements of SORNA. Other states have found that even though noncompliance comes with a 10 percent cut to federal justice assistance grants, the cost of compliance would be much higher.

Missouri is not the only state pushing back against the strictest registry requirements. Georgia, which had one of the toughest sex offender laws in the nation, scaled back its registration requirements in 2010 for people who had committed crimes such as false imprisonment or non-sexual kidnapping. This immediately removed 819 people from the registry, according to the Atlanta Journal- Constitution.

In Ohio, which was the first state to go along with the Adam Walsh Act in 2007, the state Supreme Court has struck down three controversial portions of SORNA compliance legislation in the last two years: the lifetime registration of some juveniles, the application of the more restrictive Adam Walsh Act penalties to offenders sentenced under previous, less strict laws, and community re-notification requirements for offenders previously sentenced.

"What you're seeing with Missouri and other states that are coming into compliance," says Elizabeth Pyke, director of government affairs at the National Criminal Justice Association,  "is that they're trying to get to that balance between what they feel is a good system for their state and what keeps them in line with the national rules."

Even though Ohio's Supreme Court has struck down key provisions of the law that put the state into compliance with the Adam Walsh Act, the state attorney general's office, which administers the sex offender registry, says that these decisions have not affected overall compliance with Adam Walsh requirements.

For Missouri, compliance with the act means that the state will get to keep the full amount of its federal justice assistance grant for fiscal year 2012. But if Schad's legislation becomes law, Missouri will come out of compliance and lose about $600,000.

In Greene County, in southwest Missouri, Sheriff Jim Arnott and Prosecutor Dan Patterson have voiced concerns to the legislature over changes to the registry. Arnott insists the registry as it stands is a valuable law enforcement tool, and both Patterson and Arnott say people convicted of forcible sex crimes should remain on the public list for life.

But Schad and the Missouri House decided that taking lower level offenders off the public registry would not be a threat to public safety. Most of the offenders on the registry, Schad says, committed their offenses when they were "young, dumb, and stupid." Many were charged with public urination or exposing themselves while they were drunk, offenses with penalties that include sex offender registration.  "All those [minor offenses] are lumped together with the guy that raped a baby," Schad says.

And when it comes to compliance with the Adam Walsh Act, the cost outweighs the benefits, Schad believes. More than half of the state's registered sex offenders did not list an employer in their registration, which means many of them are likely to be unemployed, according to the Missouri Highway Patrol, the agency responsible for maintaining the state's registry. "If we can help these people find good jobs," Schad says, "that would more than save [the $600,000 grant amount]."

Even though opposition to the harshest sex offender policies is brewing, the more common story is still more punishment, not less. The Louisiana House passed a billl this week to exclude sex offenders convicted of computer-related offenses from social networking sites. The Arkansas parole board is considering banning registered sex offenders from using the Internet, and New York has recently distributed sex offenders' email addresses to online gaming companies which are then disabling offenders' accounts.

And amid the looming threat of federal funding cuts, the Illinois Senate approved a $20 million expansion to the state's registry in an effort to comply with the Adam Walsh Act.

But many opponents of broad sex offender laws argue that the laws are based on fear, not science. Sex offenses have one of the lowest rates of recidivism of any type of crime. Only 3.5 percent of sex offenders were reconvicted of a subsequent sex crime within three years of their release from prison, according to a study from the U.S. Department of Justice's Bureau of Justice Statistics.