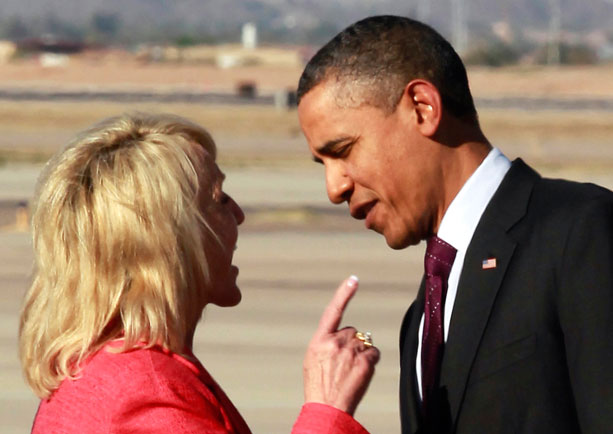 The U.S. Supreme Court case over Arizona's latest anti-immigration law, scheduled for a hearing next week, hinges largely on the question of where states' power over immigration ends and federal power begins. But in a sign of how contentious the case is, many states are supporting the federal government instead of Arizona.

Eleven states, all represented by Democratic attorneys general, warned the justices that Arizona's law reached too far and undermined the immigration policy of the United States. “However much Arizona may disagree with federal” priorities on immigration enforcement,” they wrote in a friend-of-the-court brief, “it cannot operate its own unilateral removal policy outside of any federal oversight.”

The case, Arizona v. United States, centers on a law passed by Arizona lawmakers two years ago, known as Senate Bill 1070. The measure requires local police to check the immigration status of a criminal suspect if they have “reasonable suspicion” that the suspect is in the country illegally. The Obama administration sued to block the law, and most of the law is on hold during the appeal.

Sixteen states support Arizona's position. Of those, all but West Virginia are represented by Republican attorneys general. They say that Arizona's law does not interfere with federal immigration policies, and in fact, the measure helps the federal government enforce its own immigration laws.

“The police powers of a state include the authority to arrest for federal crimes, a prerogative derived from the state's own sovereign authority,” the supporters wrote. “Consistent with the principle of dual sovereignty, the states may exercise this power to direct the police to arrest persons who violate federal immigration laws.”

Besides Arizona, 27 states joined friend-of-the-court briefs on either side of the U.S. Supreme Court case on Arizona's latest anti-immigration law.

The stakes for both camps are clear. Alabama, Georgia and South Carolina backed Arizona and have laws similar to Arizona's. The fate of their laws, along with one in Utah, will likely depend on the high court's decision. On the other side, states such as California and New York say they will suffer if the Arizona law stands, because federal agents would be tied up in Arizona and immigrants would flee to more friendly states.

The states opposing Arizona's law urged the justices to issue a “narrow” ruling that would strike down Arizona's law without further reducing states' rights.

Like many of the law's opponents, the Democratic attorneys general say the Arizona law undermines the federal government's ability to create a nationwide immigration policy. “Congress has carefully regulated not only who may be removed from the United States, but how such individuals should be identified, apprehended and detained,” they argued.

In other words, even if Arizona's police officers enforce federal law, the way they do so could be significantly different from the way the federal government's own agents carry it out.

The Obama administration, for instance, recently issued guidance on how to prioritize immigration cases. The memo tells federal agents to weigh an immigrant's standing in the community, time in the United States, criminal history and other factors when deciding whether to pursue deportation. But Arizona's law does not take those factors into account.

The uneven enforcement is not just a matter of uniform national policy, the Democratic attorneys general wrote. It is a matter of the federal government treating states differently.

They say aggressive approach “threatens to divert” federal resources from other states by “monopolizing federal attention.” The law would require police to call federal immigration authorities more often, whether to check on a suspect's status or to pick up a suspect for deportation proceedings.

In fact, a group of 42 former state attorneys general, said just handling the new requests from Arizona would increase the yearly workload of federal officials who verify the immigration status of criminal suspects by 20 percent nationally. That, they said, would lead to longer wait times for police in other states that need to run federal immigration checks, too.

Arizona Governor Jan Brewer, a Republican, criticized fellow state governments for taking sides against Arizona. She noted that the influx of immigrants into Arizona started when the federal government started cracking down on illegal border crossings in California and Texas, making the relatively unguarded Arizona desert a more attractive spot to cross.

“States joining California in opposing Arizona in this fight may think they have little at stake,” she said in a statement, noting that several of the states opposing Arizona were far from the U.S.-Mexico border. “But this debate is not just about illegal immigration. It is about every state's authority and obligation to act in the best interest and welfare of its citizens.”

Arizona, in its high court brief, says it does not need explicit permission from the federal government to enact immigration-related laws. Just because Arizona cannot decide who can get in the country legally, though, does not mean the state is “at the mercy of the federal executive's lax enforcement policy.”

“Unless and until Congress expressly forecloses such efforts, Arizona has the inherent authority to add its own resources to the enforcement of federal law,” Arizona's lawyers wrote.

The states backing Arizona also defended SB 1070 as an extension of the federal government's existing immigration policy. They note that federal law specifies that the U.S. attorney general's office must answer state inquiries about the status of suspects who are arrested.

Specifically, the Immigration and Nationalization Act says the attorney general “shall respond” to those requests, and the law puts no limits on how many times state or local police can contact the federal government.

“It would be exceedingly strange,” the supporting states wrote, “for Congress to set up a system allowing state participation in the enforcement of federal law, but then deny local law enforcement the power to conduct arrests.”

“Congress,” they concluded, “authorized a cooperative endeavor between the federal government and the states, and this scheme should be respected.”