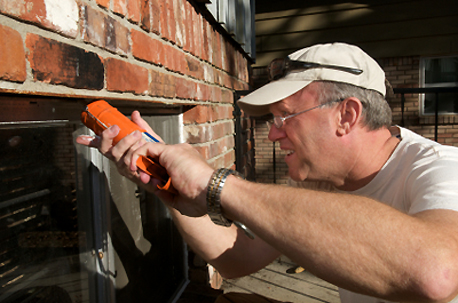 Several states are experimenting with an "on-bill" financing program that aims to spur investment in energy efficiency for homes and businesses, including owners who lack capital.

Millions of New Yorkers are stuck on an energy-finance treadmill. They manage to meet their monthly expenses, but they can't afford home upgrades that would save energy and lower costs.

For those living in New York's poorest 450,000 households — those that earn below half of the federal poverty level — energy payments have in recent years eaten up more than 40 percent of income, according to a 2011 report commissioned by the state.

"Home energy costs threaten not only the ability of New York households to retain energy services," the report notes, "but also threaten access to housing, food, medical and other necessities of life."

Though the plummeting price of natural gas amid a surge of domestic production has eased some of that burden, it hasn't eradicated it.

But state officials are optimistic that a newly offered loan program will spur more New Yorkers — even those with little capital — to invest in new insulation and air sealing or other retrofits that reduce energy use in heating, cooling and lighting.

The "on-bill financing" program, which kicked off in January, allows homeowners to pay for efficiency upgrades using money saved by reduced energy use, which they can measure on each utility bill. The state-backed loans, which carry an interest rate of less than 3 percent, require no upfront costs, and the monthly payments are designed to be no larger than the projected savings on energy.

The program, fueled by revenue New York gains from trading carbon under the 9-state Regional Greenhouse Gas Initiative, provides up to $25,000 for homeowners.

Governor Andrew Cuomo is pitching the program as a hallmark of his broader effort to address energy costs and air pollution while spurring growth of the retrofitting industry.

"It's definitely created a buzz," says Herbert Dwyer, president and CEO of ASI Energy, an Ithaca-based firm that audits and upgrades buildings for energy efficiency.

Though it's difficult to assess New York's program in its early stages, officials in other states are watching what happens as they look for ways to spur investment in an industry that could, according to a study released last month by Deutsche Bank Climate Change Advisors and the Rockefeller Foundation, eliminate $1 trillion in energy costs nationwide.

"It's one of the hot areas that a number of states are looking at," says Steve Nadel, executive director of the American Council for an Energy-Efficient Economy.

New York's program has attracted 376 applicants — an encouraging sign, says Dayle Zatlin, a spokesperson for the New York State Energy Research and Development Authority, which oversees the program. Participation in these early stages has been capped at half a percent of ratepayers in the service areas of seven participating utilities. But state officials say they expect thousands will sign up in the coming years.

New York isn't the first state to try on-bill financing. Pilot programs have taken shape in at least 20 states, according to a study released in December by Nadel's group. Some of those programs have been driven by utilities, while others, like the one in New York, have been created by state agencies. At least nine states in recent years have passed legislation supporting or requiring adoption of such programs.

Hawaii is studying adoption of a statewide program after completing a three-year pilot project administered by the Hawaiian Electric Company. The project provided low-interest loans for the installation of solar-powered water heaters — more than 500 projects in all, mostly for residential customers.

In Kansas, the private utility Midwest Energy oversees a program that has financed more than 500 residential insulation and air sealing projects. A second program in the state — a partnership between several utilities and the state energy office — has relied partly on federal stimulus funds to provide audits and upgrades to homes and small businesses.

Fewer than 1 percent of borrowers in the Midwest Energy program defaulted through 2010, according to the Environmental Defense Fund, and no one defaulted in the state's other program. Hawaii has seen similar results, as has a pilot project in Georgia.

Meanwhile, a South Carolina project has provided 125 loans for a range of upgrades, and officials are now studying data in hopes of expanding the program statewide. Some participants have seen monthly utility rates fall from $500 to $200, says John-Michael Cross, a policy analyst with the Environmental and Energy Study Institute, which is partnering on the project with the state's electric cooperatives.

But the programs have prompted several questions. For instance, what happens when property is sold before a loan is paid off? New York has aimed to circumvent those problems.  The state's program is one of only a few, including South Carolina's, that attach the loan to a meter, and not to the customer. Under those programs homeowners can transfer the loan obligation to a new occupant upon the sale of a building.

Originally, the New York agreement was similar to a mortgage, but officials say they've simplified the process using a declaration instead.

Still, questions persist about how many low-income New Yorkers will apply to the program, even though it requires no upfront capital. Reaching low-income citizens has been a challenge in many states, says Nadel. "[Low-income homeowners] have less time. They have less expertise."

Dwyer, of New York's ASI Energy, says he's heard little interest from low-income homeowners. "It's too deep. There are too many moving parts. It's too confusing," he says of the program. "It needs to be made simpler, and [the state is] working on it."

But any initial kinks in the program haven't discouraged Dwyer. "They're fine tuning," he says. "I think next year we'll get a lot more calls."