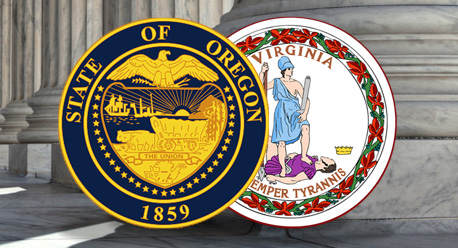 The Virginia Senate and the Oregon House each had an equal number of Democrats and Republicans this year, but that's where the similarities ended.

The Oregon House of Representatives was, by virtually every account, a model for bipartisan comity this year. Republican and Democratic lawmakers didn't just keep the peace. They approved major policy changes with strong support from members of both parties in Salem.

In Richmond, the results could hardly have been more different. The Virginia Senate had one of the most challenging sessions of any legislative body in the country. Despite some moments of agreement, Democrats and Republicans battled in court and in the court of public opinion. The Senate failed to pass a budget during its regular session for the first time in Virginia history, forcing it to approve a spending plan in a special session.

What Oregon and Virginia's experiences show is that tied legislative chambers can head in opposite directions: compromise or contention. The two states' experiences also show that in determining which direction a tied chamber goes, the political context can make all the difference. In Virginia, much of the conflict came about because Republican lawmakers were advancing a sweeping agenda. Both sides knew the fate of that agenda was entirely in the Senate's hands.

Currently, there are four. The Alaska Senate has been tied since the 2008 elections and governed by an unusual majority coalition of Democrats and Republicans since 2006. The Wisconsin Senate fell into partisan parity last month after a Republican senator resigned, but recall elections later this spring should once again give one party an edge.

Some states have had constructive sessions with tied chambers. Others have had chaos. In New York, when the Democratic and Republican caucuses each had 31 members for a month in 2009, legislative business ground to a total halt while the two parties fought in court for control. The crisis ended only when a senator who had joined with the Republicans returned to the Democrats, restoring the party's majority.

The situation in Virginia this year never degenerated to anything like that level of dysfunction. When the legislature's regular session ended last month, Governor Bob McDonnell could argue that some key parts of his agenda — on economic development, transportation and education — had been enacted, including many bills with strong bipartisan votes. “At the end of the day, 90 percent of what we did was not viewed as being partisan at all,” says Bill Bolling, Virginia's Republican lieutenant governor.

Bolling acknowledges, though, that the other 10 percent made life difficult. Even before the session began, Democrats sued to try to prevent Bolling from casting tie-breaking votes to organize the chamber with a Republican majority leader and Republican committee majorities. Democrats dropped the suit in February, but by that time the legislature was receiving national attention for contentious disputes over social issues, most notably bills to require women to receive ultrasounds before having an abortion and to repeal the law limiting residents to buying one gun a month.

On March 10, the General Assembly adjourned without the Senate having passed a budget, let alone having ironed out differences with the House. While legislative chambers elsewhere often struggle to pass their budgets, the Virginia Senate usually doesn't. Last year, when Democrats had only a two-seat edge, the Senate passed its budget in early February on a 37-3 vote.

In contrast, after the 2010 elections tied the Oregon House, Republicans and Democrats negotiated total power-sharing. Lawmakers unanimously elected Republican Bruce Hanna and Democratic Arnie Roblan as co-speakers. Each committee also was led by co-chairs of each party.

Despite occasional bumps — Democrats complained when Republicans left for a political conference in the waning days of the session — the House and the Oregon legislature as a whole was highly productive this year. The legislature closed a budget gap and approved notable, bipartisan bills on health care, foreclosure prevention and K-12 and early childhood education — all in just 35 days. “We made something work in the face of a great deal of adversity,” Hanna says, “and I'm very proud of that.”

Hanna and Roblin, who represent adjacent districts, attribute much of their success to an ability to work together. The two co-speakers attended town hall meetings in each other's district, held joint press conferences and conducted joint interviews. “The people who are at the leadership,” Roblan says, “they have to have a relationship. They have to say, ‘We're going to make this work.' ”

The odd thing, though, is that Virginia's Senate leadership has been working together for a generation. Nearly half the senators have held office for at least 10 years. “On a personal basis, there's probably a lot more of the collegiality in the Senate than the House,” says Democrat Dick Saslaw, the minority leader. “From my standpoint, they're political adversaries, not personal enemies.”

One explanation for why these relationships didn't prevent the conflicts is that the leaders were beholden to the more ideological and confrontational members of their caucuses and their parties. That's the view of former John Chichester, a centrist Republican who played a key role in the generally peaceful power-sharing arrangement that governed the Virginia Senate the last time the body was tied, after the 1995 elections. “The extremes in the Republican Party are governing the Republican Party. The extremes of the Democratic Party are governing the Democratic Party,” Chichester says. “That's exactly a Xerox copy of what's happening in Congress.”

The big difference in tied votes

Still, partisanship on its own doesn't necessarily explain the difference between the two states: It's not as though Oregon has been immune from the trend toward more fiercely partisan state legislative politics. There is one critical difference between the Virginia Senate and the Oregon House, though: a tiebreaker.

In the Oregon House, there's no office empowered to break ties, meaning every decision the body made required a bipartisan vote. The Virginia Senate, of course, had Bolling as lieutenant governor. With Bolling as a possible 21st vote for Republicans, the parties couldn't even agree on whether the chamber really was tied at all.

That was true even after Bolling staked out a middle ground before the session, saying constitutionally he could vote on organizing the chamber, but couldn't break a tie on the budget. Despite that limitation, Bolling played a critical role. He cast 28 tiebreaking votes this year, which was more than in his previous six years in office combined.

The other, more subtle difference between the two states is that the stakes were much higher in Virginia. In Oregon, Republicans had no hope of enacting their full agenda: Democrats held the Senate and the governorship. For their part, Democrats held power for years before the 2010 election. Much of what they wanted to do they'd already done.

In Virginia, on the other hand, Republicans hadn't controlled both houses of the legislature and the governorship since before the 2001 elections. The party had years of pent-up ideas, including many that Democrats strongly opposed. Both parties knew that this agenda hinged on how the Senate was organized, which set the stage for conflict.

In the end, Republicans got much of what they wanted, but not all of it. Measures to create more stringent voter I.D. requirements, to offer tax credits for private school scholarships and to forbid state agencies from giving preference to unionized contractors all passed on 20-20 votes, with Bolling breaking the ties.

Virginia's senators aren't up for reelection again until 2015, meaning it's possible the chamber will be tied for another three years. But, with some of Republicans' demand for conservative legislation satisfied, it's possible that future sessions won't be as contentious. There are already some signs that peace is returning: Senate and House negotiators appear close to reaching a budget agreement.

Meanwhile, in Oregon, every seat in the House is up for reelection this fall. Most likely, the elections will break the tie. The question is how much of the bipartisan goodwill will continue. “The gloves come off when we go into the campaign season and everyone will work hard to become a majority party,” Roblan says. But, he adds: “I believe the people who served during this legislative session will have grown from the experience.”