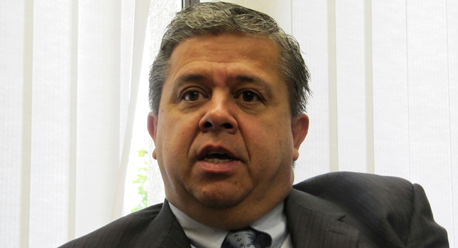 Tom Luna, Idaho Superintendent of Public Instruction, sat down with Stateline recently to share his vision on education policy.

Idaho's Superintendent of Public Instruction Tom Luna and Idaho Governor Butch Otter, who once shared lodging when Luna worked for the U.S. Education Department and Otter was a congressman, came together again last year to successfully back a series of education changes in the state.

The plan, called Students Come First, increases the role of technology in the classroom and changes how teachers are evaluated and paid, eliminating collective bargaining and tenure and introducing performance pay.

Those moves drew protests at the state capitol in Boise, and the entire slate of changes will be on the ballot in November for possible repeal by voters. Luna spoke with Stateline in Washington D.C. last week about the 10-year-old No Child Left Behind law, his vision for changing education in his state and why he thinks that vision caused protests. He was in town for the legislative meeting of the Council of Chief State School Officers, of which he serves as president.

Yeah, there is. I don't think anyone in Washington, D.C. should be patting themselves on the back and congratulating themselves because we have this waiver process. The reason why all these states are jumping through all these hoops to get waivers is because the federal government has failed, from the administration down to the staff in Congress. I think the fact that Congress has not been able to reauthorize this law in five years is evidence enough that the federal government's role in education should be minimal.

You worked in the U.S. Department of Education soon after No Child Left Behind was passed. At that point were there concerns that the targets were unrealistic?

No. But I think what they were frustrated with, rightfully so, was the implementation. No Child Left Behind reminds me of the Clint Eastwood movie "The Good, the Bad and the Ugly." There's a little bit of all of that in the law. Because of No Child Left Behind, we now have a standards-based education system, and that just didn't exist before. It was quite possible – and it sure happened in Idaho – where what was taught in third grade in one school was taught in fourth grade in a school right across town. Nobody argues anymore whether we should have a standards-based education system. The bad part is that it wasn't implemented well, it was confusing for states. The ugly part is what we've learned over the past number of years. It's very difficult for small, rural schools to implement. Now it's become more of a stumbling block.

Getting to the ugly part, just a few days ago there was a big story about standardized testing patterns in schools across the country suggesting teacher cheating. Is that something that states need to be paying more attention to?

Yeah, they need to be paying attention to them. But I think what we really need to remember is that we're talking about a character flaw for anybody who is willing to cheat. If we have assessments that aren't accurately measuring things or that are being used too much for punitive reasons, then those have to be dealt with. But I think we're kidding ourselves if we think that if we remove accountability that all the sudden individuals that had character flaws are no longer going to have character flaws.

In Idaho, part of your education plan, which got some pushback, is to change the way that teachers are evaluated and include some incentives for teachers along the way. How is the system different now and where do you think the resistance came from?

We had a system where it was almost impossible to financially reward great teachers and very difficult to deal with ineffective teachers. We decided if we wanted an education system that truly puts students first we had to remove the barriers to both, so that's what we did. We no longer give teachers tenure. We also put financial incentives in place to attract more of the best and brightest and keep the great ones we already have, recognizing that the teacher is by far the most important factor in a child's academic success.

Now the pushback we got was first and primarily from the leaders of the teachers union, because that disrupts their model. They made it clear to us in Idaho that they would never support a teacher compensation plan unless the money first went through collective bargaining. In other words, it had to sift through their fingers before teachers got any of it. We just wouldn't agree with that.

Are there job protections in place if you're a teacher?

To be clear, the laws we passed say that if a teacher currently has tenure, they keep it. So we're not going to take anything away from teachers who have already earned tenure or continuing-contract status. What the law says is we're not going to give it to any more teachers in the future. But what those teachers will have is a one- to two-year contract with all the job protections that every contract offers. It's the same contract that our principals and superintendents work under, so if it's good enough for those educators, then it's good enough for our teachers.

With the pay-for-performance model you're rewarding teams of teachers at the school level rather than the individual teacher. That's not what every state has done. Were both options on the table at some point?

But there is a third part where it's based on student performance, and it only goes down to the school level. We never want the reality or even the perception that teachers in a given school are competing with each other on how their students do academically, we want to foster collaboration and teamwork and have the whole school work together on a common goal.

In November, the whole slate of reform laws will be on the ballot. How much does that hang over everyone's head as you go forward with these changes?

Time's on our side, fortunately. The longer this goes on and the closer we get to November I think the less this hangs over people's heads. There are many educators across Idaho who will tell you that the last thing they want to do is to just go back to where we were before. We have outside interests that are determined to make sure that what's happened in Idaho doesn't happen anywhere else across the country. That's a real factor and we can't ignore it.

But parents are already seeing positive changes in their schools. Parents now know that if their students meet graduation requirements early, the state pays for them to take college courses the rest of their high school career. When they see what's going on all across the country and realize that Idaho's not alone in these reform efforts, I think the last thing they're going to want to do is go back to the system we had before.

Connecticut is looking at similar changes now and it's been a bit of a struggle. When you talk with your counterparts from other states, what do you tell them are the lessons that you learned from going through this last year?

It takes the leadership at the top levels of state government, so you have to have a governor who's willing to lead and Butch Otter did that. You're going to get just as much resistance if you do one part of this reform as you'll get if you do the whole thing. So do the whole thing and don't blink. Do not blink.