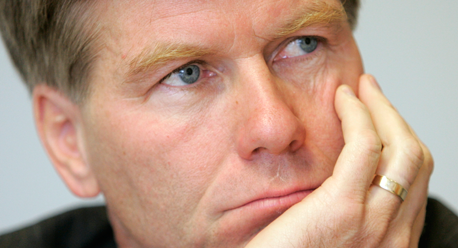 'Let's be civil,' Governor Bob McDonnell told Virginia legislators at the start of this year's session. They didn't always follow his injunction. .

The legislative session that Virginia Governor Bob McDonnell wanted this year was very different from the one he wound up getting.

McDonnell, a Republican, kicked off the session in January by urging lawmakers to focus on job creation and state finances, with funding for pensions and education among his top concerns. He pointedly asked the legislators not to engage in partisan political fights that could sidetrack his priorities, especially after a hard-fought election year that gave the GOP control of both legislative chambers for the first time in 12 years.

By the time the General Assembly adjourned in early March, lawmakers had indeed been productive, but not in the way that McDonnell preferred. Majority Republicans muscled through a flurry of controversial social bills over the objections of Democrats, who were powerless to stop the legislation. The bills included measures to restrict adoptions by gay couples, impose tough new rules on those seeking abortions and do away with a nearly two-decade-old law preventing Virginians from purchasing more than one handgun a month. McDonnell signed all of them into law.

“The social conservatives looked at the [political] conditions and said, ‘Here's our time,'” says Dan Palazzolo, a political science professor at the University of Richmond.

What lawmakers did not do in their regular session was pass a state budget. Democrats used their power in the evenly split state Senate — where Republican Lieutenant Governor Bill Bolling can cast tie-breaking votes on most legislation but not the budget — to stall the two-year, $85 billion spending plan. That forced the General Assembly into a special session and prompted McDonnell to excoriate Democrats for what he saw as the kind of obstructionism he had specifically asked them to avoid. He accused them of “putting their partisanship and their power over the needs of their constituents.” Democrats countered that Republicans had done plenty of overreaching on social policy, leading to the budget stalemate.

The two sides eventually agreed on a spending plan during a special session late last month, and Palazzolo notes that several other controversial pieces of social legislation did not make it to the governor's desk. But the episode highlights a broader dynamic that has been evident in state legislatures across the country this year: Partisan social clashes have been front-and-center, in a few cases pushing state budget debates — the main order of business for lawmakers in recent years — to the back burner.

Even though most legislatures are still in session, 2012 already has seen debate on a wide range of social issues that range from gun control to sex education. But it has been abortion and gay marriage that have attracted the most attention.

Virginia was one of several all-Republican states, including Alabama, Idaho and Pennsylvania, where lawmakers debated legislation requiring women to undergo ultrasound tests before having an abortion. Virginia's measure sparked national protests due to a provision — later removed — that could have forced some women to undergo invasive vaginal ultrasounds. A barrage of criticism from groups representing women and physicians led McDonnell to demand that lawmakers remove the provision before he would sign it.

Republicans in Idaho faced their own backlash, tabling their ultrasound measure for the year, but many other abortion restrictions have moved forward. Among the most prominent is a new law in Utah, where Republicans tripled the waiting time before women can have abortions, from 24 hours after an initial consultation with a doctor, to 72 hours, the longest such period in the nation.

Democrats have advanced their own social agenda. Maryland and Washington State legalized same-sex unions, while a similar measure passed by New Jersey's Democratic legislature was vetoed by Republican Governor Chris Christie, who made clear all along that he intended to reject the measure.

In Washington State, as in Virginia, lawmakers were unable to agree on a state budget before the regular session adjourned in early March, and some members of the Republican minority complained that Democrats' focus on gay marriage did not leave enough time to negotiate a budget. The session “just became about redefining marriage,” Senate Minority Leader Mike Hewitt, a Republican and an opponent of gay marriage, told the Daily News of Longview, Washington, as the regular session wound down. “So we just wasted three weeks.”

Even in a special session called to pass the budget, social legislation has remained prominent in Washington State. Many Democrats are hoping to pass a bill, described as the first of its kind in the nation, requiring private insurers to pay for abortions. Lawmakers have pressed forward on the bill even though Governor Chris Gregoire, a fellow Democrat, has — like McDonnell— urged her own party to focus on the budget instead.

Familiar social debates have also played around criminal justice policy. Besides Virginia's new law allowing residents to buy more than one handgun a month, Oklahoma is likely to become the first state in seven years to give residents the right to carry guns openly in public, The Wall Street Journal reported. Both measures were backed primarily by Republicans.

Democrats in Connecticut are hoping to repeal the death penalty this year after narrowly failing to do so last year. If they succeed, Connecticut would join three other states — Illinois, New Jersey and New Mexico — that have repealed capital punishment since 2007. All three were controlled by Democrats at the time the measures passed. California voters also could weigh in on a ballot measure to repeal the death penalty in November.

Ballot questions in California and elsewhere will ensure that some of the social debates that happened at the statehouse will continue on the campaign trail later this year. Gay marriage opponents in Maryland and Washington, for example, want voters to reject their states' recently enacted laws approving the practice, while North Carolina will vote in May on whether to place a ban on gay marriage in the state constitution.

While debates over abortion and gay marriage are nothing new, several states have gone further this year in the kinds of social policy questions they are addressing, particularly on the subject of contraception.

Utah and Wisconsin lawmakers have made sex education a key point of contention. Both Republican-controlled state legislatures approved policies requiring abstinence education in public schools, with limited or no discussion of birth control as a way to avoid unwanted pregnancies. Utah lawmakers passed what was considered the most restrictive such measure in the nation — essentially prohibiting discussion of contraception in schools — but it was vetoed by GOP Governor Gary Herbert in a move that surprised and upset social conservatives. Wisconsin Governor Scott Walker, a Republican, is still deciding whether to sign his own state's abstinence education bill.

Elsewhere, the fallout from the Obama administration's controversial policy requiring religiously affiliated institutions to provide health insurance coverage for contraception has echoed in the states. Even though the administration eventually softened its policy, state lawmakers have responded by revisiting their own measures. Arizona, Georgia and New Hampshire are among the states considering legislation to prevent insurers from being required to provide coverage for contraception.

“Most of them are a result of what is happening at the federal level,” Nash, of the Guttmacher Institute, says. “In some states it appears that there were legislators who didn't realize what their contraceptive coverage law permitted and were very surprised when the federal debate started happening.”