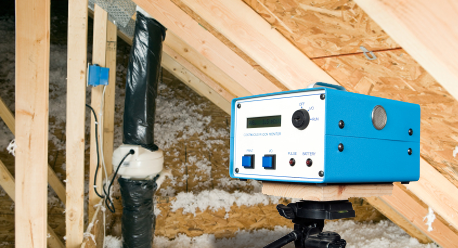 A radon monitor sits near a vent that fans radon gas out of a house.

The systems, which drastically lower radon risk, can cost as little as a few hundred dollars to install. They are even less expensive when installed during a building's construction.

A dry cough, a small pain in her shoulder blade — it was probably just allergies, Liz Hoffmann thought before a doctor's visit in 2003. But a chest X-ray soon told a different story. A 5-centimeter mass was growing in her left lung.

But late in the summer of 2006 the cancer returned. This time more than 4 liters of fluid filled her chest, which was drained twice a week. She endured another round of chemotherapy. By 2008, the cancer had spread to her brain, where the lesions have since multiplied.

Today Hoffmann, 46, is facing a fourth round of chemotherapy, as she continues to beat her original odds of post-diagnosis survival: a 15 percent chance of living 5 years.

But what caused her cancer? After all, she had neither smoked nor lived among smokers.

At her cousin's suggestion, Hoffmann tested her Milwaukee home for radon, a colorless, odorless gas that seeps into buildings through cracks in walls and foundations. For years, the test revealed, she'd been surrounded by high levels of the gas — 8.6 picocuries of it, more than twice the amount that the U.S. Environmental Protection Agency labels as dangerous.

That exposure to radon, health experts say, is likely what took half of Hoffmann's lung and turned her life upside down.

Her case isn't rare. The gas, naturally produced as uranium decays in soil, kills more than 21,000 Americans each year, according to the EPA. But despite more than two decades worth of science linking radon to cancer, scores of health experts say that neither states nor the federal government are doing enough to fix a problem that can be solved cheaply through testing and mitigation of homes, schools and childcare centers. Much of the modest state effort comes out of existing federal health programs.

“It's maddening,” says Hoffmann, who in 2004 founded Cancer Survivors Against Radon, a nonprofit group that has since lost several members to lung cancer. “All these deaths and sicknesses are preventable.”

To try to deal with radon, states have enacted a patchwork of legislation that has eased the problem but largely comes up short, health officials say. Now, they worry that the federal government's 2013 budget will severely weaken, and in some cases, eradicate state education and testing programs.

“The one thing that's interesting about radon, is you can do something about it,” says Richard Welke, manager of the state radon program in Iowa, where 70 percent of homes fall within the EPA's danger zone. “It's almost like the people who make those decisions don't get that.”

Few Americans are aware of radon's risk and the relatively inexpensive way to reduce it. It can cost less than $20 to test homes for radon, and as little as a few hundred dollars to install an effective mitigation system.

In 1988, shortly after researchers conclusively identified radon as a health threat, Congress passed the Indoor Radon Abatement Act, which initially allocated $45 million over three years to awareness and training, research, mitigation efforts and the development of model construction standards. Of that money, $10 million each year was granted to states.

The goal, according to the act, was to lower indoor radon concentrations to the safer levels found in outdoor air. But more than 20 years later, the goal of the EPA program is far out of reach.

The number of U.S. homes built each year without mitigation systems continues to outpace those being built with radon-resistant features installed, and more than 90,000 classrooms nationwide likely have radon concentrations exceeding the EPA's action level, estimates Bill Field, a University of Iowa researcher and one of the world's top radon experts. That's up from the 70,000 high-radon classrooms estimated in a survey done in the late 1980s.

“The United States has not yet achieved the level of voluntary action required to make a real impact on indoor radon exposure,” the EPA says in its 2011 radon action plan. That's largely because many real estate agents lack incentive to test homes, notes a 2008 report from the agency's inspector general.

Under the president's proposed budget, EPA would cut almost $2 million from its radon program, bringing spending below $2.2 million. Along with that, the agency would eliminate the state grants, which by 2012 it had whittled to $8 million.

"The EPA has thrown in the towel on radon,” Field told Stateline. “The EPA [is] not informing Congress of the risk posed by radon, which is often orders of magnitude higher than the other carcinogens they regulate.”

In a statement responding to that criticism, the EPA said it is not abandoning its anti-radon efforts, despite decreased funding.

“The infrastructure and assets that we have helped put in place at the state and community level will continue to help Americans address radon,” the agency said. “EPA will continue to provide guidance and support for private sector standards for radon.”

Without federal mandates requiring radon-resistant home construction or mandatory testing in schools, state legislatures have been left to address radon on their own terms.

Most states have codified at least some radon awareness efforts, but many of those programs depend on federal money. The programs tend to increase testing, says Peggy Huppert, director of government relations for the American Cancer Society in Iowa, but they alone can't fix the problem.

“The only way to get consistent testing and mitigation is through a change in state law,” she says.

Six states — Michigan, Minnesota, Maryland, New Jersey, Oregon and Washington — have enacted building codes requiring radon-resistant new construction in certain areas, according to the EPA. Four more states — Florida, Maine, Rhode Island and Virginia — have statewide codes, but  local governments can choose not to enact them. Several states require that real estate agents provide information about radon when selling a house — a law that has sparked a 20 percent uptick in testing in Illinois since 2008, says Patrick Daniels, coordinator of the state's radon program. But few states require radon testing in existing homes, schools or childcare facilities.

In several states, survivors of cancer have helped prompt action by lobbying the legislature.

That's been the case in Illinois, where Gloria Linnertz lost her husband, Joe, a non-smoker, to lung cancer just 18 months after discovering their Waterloo home registered radon concentrations at more than four times the EPA action level. Last year the legislature passed a law requiring landlords to disclose test results to tenants.This year it is considering bills on radon-resistant construction and daycare testing — the latter of which has passed in the House.

In Iowa, Gail Orcutt, now cancer-free after a 2009 diagnosis, has been a vocal proponent of comprehensive radon legislation that was debated in the House and Senate this year but ultimately failed. State Representative Dan Kelly, the Democrat who introduced the bill, says the effort was “a positive step forward." He predicts passage in the next two sessions.

“I'm ready to reintroduce every year, if possible,” Kelly says. “Clearly the laws need to be updated.”

Without strong laws in place, states such as Iowa rely largely on awareness programs and the availability of discounted test kits to help lower radon rates. But scarce federal funding would put those programs in danger.

In Iowa, the cuts “would hurt the awareness part for sure,” says Welke. The state's program would survive, he says, only if licensing fees from Iowa's growing radon mitigation industry were diverted to the program from the state's general fund, where they now sit.

Radon programs in a few states, including Illinois, benefit from such fees.  But most states don't charge for licensing, so the programs would likely fold under the next federal budget.

“The cuts they are talking about would take us back 25 years,” says Liz Hoffmann.

But after testifying last week at a U.S. House Appropriations Committee, Hoffmann said she has renewed optimism that Congress will revisit the radon issue. Several committee members appeared moved by her story.

Steven LaTourette, an Ohio Republican, said he was surprised to discover the scope of the problem. “I hadn't heard those statistics before,” he said.

Jim Moran, a Democrat from Virginia, wondered aloud whether the federal goverment could buy test kits that schools could send home with students, while LaTourette said he could support a federal law requiring radon education during home sales.

“I think we can work on this,” he said. “I'm not a big government guy…but this seems worthwhile to me.”