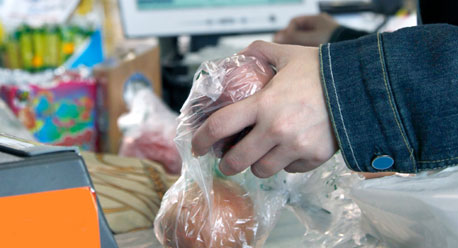 Recent cases of million-dollar lottery winners still collecting food stamps have given fodder to critics in states and in Congress who say the program is fraught with abuse.

The odds of winning one of Michigan's high-stakes lottery games are 1 in 10,000, but the probability of two people hitting million-dollar jackpots and still be collecting food stamps has to be even more remote. That is exactly what happened in Michigan, stoking a nationwide debate over whether the program is becoming an out-of-control entitlement.

A lottery winner "can certainly afford his own food, and should not be able to get more money from hard-working taxpayers after his big pay out," says Michigan state Representative Dave Agema, who has introduced proposals aimed at ensuring lottery winners aren't on the public dole. "Michigan's taxpayers have an absolute right to know when their tax dollars are going to millionaires," he said.

While these kinds of cases are seen as rare, the $75 billion spent last year on food stamps across the country is coming under more scrutiny, as Congress struggles to pare down the federal debt. With a record 45 million Americans relying on food stamps, states and Congress are taking a closer look at who should get help paying for groceries.

Supporters say the extra scrutiny is needed to make sure taxpayer dollars are well-spent and help goes only to the truly needy. Advocates for the poor call the Michigan cases isolated incidents that distract from a largely efficient program that has helped nearly 4 million Americans stay out of poverty.

Pennsylvania is among those states considering changes in the food stamp program, formally known as the Supplemental Nutrition Assistance Program (SNAP), which the federal government funds, but states administer.

Beginning in May, anyone under age 60 with more than $5,500 in savings in Pennsylvania could not qualify for food stamps. The threshold is higher ($9,000) for older Pennsylvanians or the disabled. A person's home, retirement savings and primary vehicle won't count.

Most states don't use "asset" tests like Pennsylvania's. Instead, they make anyone on welfare automatically eligible for food stamps. In government lingo, it's called "broad-based categorical eligibility." Many states have adopted it because it's easier to enroll people.

Another reason states have gone that route is that many consider the federal government's food stamp rules unrealistic. Federal guidelines limit eligibility to households with only $2,000 in "countable resources" or $3,250 if at least one person in the household is age 60 or older, or disabled. Pennsylvania used these limits when it last had an asset test in 2008. Only 10 states use these federal limits: Alaska, Arkansas, Indiana, Kansas, Missouri, South Dakota, Tennessee, Utah, Virginia and Wyoming.

"It's easy to make fun of categorical eligibility, because it is sort of a roundabout process to determine eligibility," says Elizabeth Lower-Basch, senior policy analyst at the Center for Law and Social Policy, which advocates for the poor. "But the fact is that states have adopted it — including many states with conservative governors and legislators — because the statutory limit (for food stamps) is so absurdly low that it would trap people in poverty by not letting them get ahead," she says.

Even though Pennsylvania has higher limits, antipoverty advocates have condemned its "asset" test, fearing needy people will go without. A key Pennsylvania House Republican likewise has urged Governor Tom Corbett to reconsider this method. "We should be about stopping people who don't deserve them from getting any kind of benefits," says state Representative Gene DiGirolamo, whose human resources panel held a hearing last week on the issue, "But this just doesn't seem to fit into that category," he said in The Patriot News.

But supporters of Pennsylvania's approach include the free-market advocate, the Commonwealth Foundation, which calls the move a "small step towards the greater goal of helping Pennsylvanians up while not handing out tax dollars to those who don't need it."

Tad DeHaven of the Cato Institute, a libertarian think tank, says local associations, not government, should be on the front lines of helping the poor. "Honestly, we don't want people to starve in order to save a buck," he wrote recently. "We just believe that the federal government is an improper and less effective means for assisting those who are truly in need."

Some key members of Congress want to prevent states from using categorical eligibility. Republican U.S. Senator Jeff Sessions of Alabama figures the federal government could save $10 billion over 10 years by getting rid of the automatic sign-up process, noting that food stamp costs have quadrupled in the last decade. U.S. Department of Agriculture data show costs totaled $20 billion in 2002 and Sessions says the total this year is expected to reach nearly $87 billion.

The House Republican budget blueprint released this week by U.S. Representative Paul Ryan would go even further. It would turn the food stamp program into a block grant, cut nearly $123 billion from the program and require recipients to work or enroll in job training. Democrats and liberal groups say Ryan's budget would increase hunger, destroy jobs and slow the economic recovery.

Where do lottery winnings fit in?

Critics such as Ryan specifically point to the Michigan lottery ticket winners on food stamps as examples of a program "rife with waste, fraud and abuse" and a reason for reform.

In Michigan, food stamp recipients are supposed to report any changes in their resources within 10 days, but these big lottery winners didn't. They were discovered only when local television stations reported them making purchases using the debit-style cards issued by the food stamp program.

"I thought that they would cut me off, but since they didn't, I thought maybe it was OK because I'm not working," the most recent winner told WDIV, a Detroit television station. "I feel that it's OK because I have no income, and I have bills to pay. I have two houses," the winner said in a video posted online that quickly went viral.

Michigan, which last year set an asset limit of $5,000, has since cut off her benefits. Maura D. Corrigan, director of the Michigan Department of Human Services, said in a statement that the state "relies on clients being forthcoming about their actual financial status." Those who do not and continue to accept benefits could face criminal charges and be required to pay back the benefits. DHS supports pending legislation that would require the Michigan Lottery to notify the department of lottery winners.

USDA says that despite "a rash of recent stories about food stamp fraud," the program has a 1 percent fraud rate and a 3.8 percent payment error rate. That is far less than some other programs. More than 20 percent of claims for the Earned Income Tax Credit, for example, are paid with some error, while Medicaid's payment error rate is 8 percent.

As Stateline has reported, USDA is leaning on states to be more vigilant in finding fraud among those who get food stamps and retailers that accept the benefits. The department last year unveiled new tactics states can use to root out fraud in the food stamp program. For example, states can crack down on people trying to sell their food stamps for cash on Facebook and other social media, even before a sale actually takes place.

"The fact is fraud is a limited problem in SNAP — though no amount is acceptable," Kevin Concannon, undersecretary of food, nutrition and consumer services at the Agriculture Department, wrote in a recent article.

Such talk puzzles supporters of the program. "Why, with poverty at record highs, wouldn't being the food stamp president be a good thing," asks Jessica Bartholow, a legislative advocate with the Western Center on Law and Poverty in Sacramento. "It is better than being the hunger president, right?"