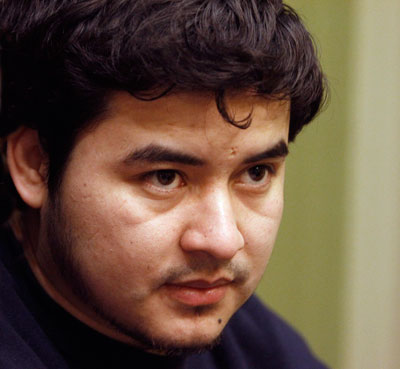 Danilo Lopez is a dairy farm worker in Vermont who is pushing for drivers' licenses for illegal immigrants. Many employers back the effort.

In Garden City, a sprawling blue-collar town on the western plains of Kansas, local businesses struggle to find enough workers. At the end of last year, the unemployment rate in the county stood at just 3.9 percent. Western Kansas, known for its meatpacking plants, is also seeing growth in other agricultural areas, not to mention wind power and the oil and gas industries.

Local dairy farmers try to lure new workers with decent salaries and benefits, but they find no takers, says Renaldo Mesa, who has served as president of the local chamber of commerce and as Garden City's mayor. “There's a lot of jobs out here,” Mesa says, “especially out in western Kansas, that average Americans just will not take.” Many local businesses  rely on immigrant labor. Immigrants already make up a fifth of the population of Garden City; nearly half the city is Hispanic. There are local festivals for Mexico's independence day and the Vietnamese new year.

As a Republican member of the Kansas House of Representatives, Mesa backed a proposal this year designed to make it easier for illegal immigrants to keep their jobs. It would allow the state to ask the federal government for leniency for longtime residents who work in Kansas if those immigrants face deportation.

He says it is a step that will help spur growth in agriculture, a major focus of Governor Sam Brownback. “That's what we do out here in Kansas,” Mesa says. “In order to do that, you've got to have the workforce.”

Although they are overshadowed by state efforts to crack down on illegal immigration, business groups are working in several state capitols to help undocumented workers and, in the process, make it easier for businesses to  hire immigrants legally. But many of those efforts, like the one in Kansas, are testing new political and legal ground.

“It is all new,” says Tamar Jacoby, the head of the business coalition Immigration Works USA, which is backing the Kansas measure and similar immigrant-friendly proposals in other states. “But the same thing is driving it everywhere and it's not surprising. It's the tightening enforcement noose. More and more farmers — and other employers too,  but farmers especially — are having trouble finding the workers they need to keep their businesses open.”

The frustration from farmers is cropping up in states that have little else in common.

Georgia last year passed a law to discourage illegal immigrants from settling there. But the state's agriculture commissioner has actively pushed Congress to overhaul the nation's guest worker programs so cantaloupe and cucumber farmers can hire undocumented workers legally to pick their crops.

Vermont lawmakers now appear to be heading down a path toward letting unauthorized immigrants get driver's licenses. The change would especially benefit immigrant workers on dairy farms, who can seldom leave their farms to buy food, see doctors or attend church.

As part of a larger immigration package, the Utah legislature has called for the state to set up its own guest worker program starting in 2013. Similar bills were introduced this year in New Mexico and California. But both Vermont and Georgia rejected that approach. Current federal law does not allow for separate state guest worker programs; Utah has asked for federal permission to allow its program to take effect.

The variety of approaches to the same problem shows that there is no clear or easy option for states to take on what is essentially a federal issue.

After a seven-month study, Georgia's agriculture department concluded just that. “The solution to the labor issues facing Georgia producers rests in the hand of the federal government,” the department wrote in a January report. “Only the federal government can make [H-2A, the agricultural guest worker program] useful for farmers. It is yet to be seen if H-2A can be rebranded to fulfill the needs of 21st century agriculture, but reforming the archaic program must be a top priority.”

One of the agency's complaints was that the existing guest worker program does not cover many agricultural needs. It can help with seasonal work, but it is not designed for workers who keep the same job all year. Other employers felt the program was too expensive or too complicated.

But the lack of workers is hurting Georgia farmers, state Agriculture Commissioner Gary Black told a congressional panel in February. “Over 50 percent of respondents who produce blueberries, cabbage, cantaloupe, cucumbers, eggplant, peppers, squash, tobacco and watermelon,” he said, “reported income losses in 2011 due to lack of workers.”

In Kansas, businesses lined up behind the proposal backed by Mesa to insert the state into federal immigration proceedings. Under the measure, the state would set up a program for undocumented immigrants working in certain industries. The state would ask the federal government not to deport or jail immigrants in the program. To be eligible, immigrants would have to have a clean criminal record, have lived in the United States more than five years, would agree to learn English and would have to work in industries with severe labor shortages.

“It is all voluntary. It is up to them,” says Allie Devine, a former Kansas agriculture secretary who crafted the proposal. “For [immigrants], it is a path to lawful presence and work authorization that they may not have today. So we're trying to bolster their case.”

There is no guarantee, though, that such a state program would carry the day with the federal government. The measure comes in response to a new Obama administration policy to help immigration officials decide which cases they should focus the most attention on. It is up to federal officials to decide how aggressively they pursue individual cases.

The Kansas proposal is a long way from becoming law. Supporters say it is more likely to pass next year, after the 2012 elections, rather than in the current legislative session. Even then, its fate is uncertain. Kansas is also home to Kris Kobach, the secretary of state and one of the most vocal crusaders against illegal immigration in the country.

Although they live in a border state, Vermont lawmakers seldom dealt with illegal immigration before this year.

A traffic stop last fall changed that. During the stop, a state trooper who pulled over a vehicle for speeding quickly shifted his focus to the two passengers, who were Mexican workers on their way back to their jobs at a dairy farm. The officer detained both passengers and eventually turned them over to the Border Patrol.

Word got out quickly, and a crowd of protesters tried to block the Border Patrol from taking custody. Three protesters were arrested. The Border Patrol released the passengers later that night, but the outcry led to changes in state police practices.

One of the passengers, Danilo Lopez, met with Governor Peter Shumlin about the issue. Now Lopez is pushing a bill in the legislature to issue driver's licenses to undocumented immigrants like himself. Immigrants working in rural areas would not feel trapped on their farms, he says. As it is now, they are almost entirely dependent on their bosses to buy food.

“The truth is that this law... isn't just about a license,” he says in Spanish. “This is really about just having the ability to move freely, to be able to access services, to have a decent life.”

The Vermont Senate is expected to vote on the legislation this week. In its current form, the measure would create a study committee to iron out logistical details of how to make the transition. But the governor supports the eventual goal of letting undocumented immigrants drive, something only three states (New Mexico, Utah and Washington State) now do.

Some of the biggest allies for Lopez and other immigrants have been the farmers they work for. “We... have farmers where the workers are like family,” Lopez says. “Many farmers are working side by side with us, because the work in agriculture and in dairy farms is difficult and physically demanding.”