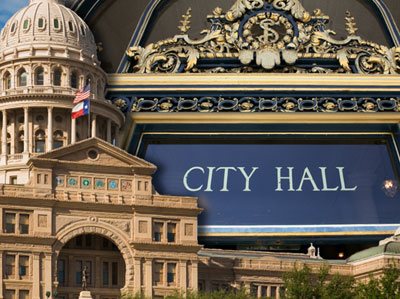 Conservative state lawmakers who rail against federal mandates often find themselves using the same weapon in dealing with their own cities and counties.


Mayor Ken Moore and the elected aldermen of Franklin, Tennessee, unanimously approved a resolution last Tuesday warning against overbearing central government. That may not be a surprise, since Franklin is a conservative, reliably Republican city. What is surprising is that the target of Franklin's concern wasn't the Obama administration or the federal government. Instead, it was the central government half an hour up the road in Nashville: the Republican-led Tennessee General Assembly.

The resolution included a list of 14 bills the mayor and aldermen opposed. On the list was legislation to substantially reduce local zoning and planning powers, as well as narrower bills to limit local regulation of signs, to ban localities from requiring residential sprinkler systems and to end local regulation of fireworks. Taken together, local officials are worried that these bills will preempt powers they consider an essential part of their jobs. “All the mayors in our region,” says Moore, a Republican, “are quite concerned about this potential gutting of our ability to do what's in the best interest of our communities.”

Debates about the relative authority of state and local government are not new. But in places like Tennessee, where Republicans claimed comfortable majorities in the legislature in 2010, they come with a different subtext.

Many of these state lawmakers have accused the federal government of adopting an imperious, one-size-fits-all mentality and of subverting the rightful powers of states. At the same time, many high-profile debates in the Tennessee Capitol over the last two years — on topics such as local wage rules and local non-discrimination rules, among others — have centered on the state trying to limit the power of localities to make decisions for themselves.

To some critics, that's a sign of hypocrisy. What conservative supporters of these laws argue, though, is that localities sometimes use their power in ways that are inconsistent with values the state holds dear, such as defending property rights and reducing government regulation. Their case is that the only way the legislature can enact its vision for government is to use the power it has, not delegate it to others. Most of the legislation in Tennessee hasn't passed yet and some of it seems unlikely to pass soon. Still, in Tennessee and elsewhere, it's clear that for conservative lawmakers local control is just one principle, a principle that sometimes is superseded by others.

While the extent of local government autonomy varies from state to state, nowhere is that autonomy absolute. Even in states like Tennessee that offer limited “home rule,” state governments can act to overrule the localities. “What the locals need to remember,” says Jim Gotto, a member of the Tennessee legislature, “is that all the power they have is what has been delegated to them by the state.”

As a result, states and localities are engaged in a constant push and pull in state capitols. In Indiana, for example, the legislature rejected a bill earlier this year that would have given some local jurisdictions the power to ask voters for tax increases to pay for public transit. The move came even though the mayor of Indianapolis considered the bill a top priority and the measure had the support of other local officials and business groups.

On the other hand, one of the hottest topics in Maine right now is legislation that would allow counties to opt out of the jurisdiction of the state Land Use Regulation Commission, giving the counties more power over development within their borders. Republicans are leading the charge against the land use commission. That squares with the party's preference for government closer to the people.

Indeed, there are still plenty of conservative legislators who preach deference to local sovereignty. “We need big government not to tell little government what to do,” says Florida State Representative Fred Costello, who served as mayor of Ormond Beach for eight years before being elected to the legislature in 2010.

But for the past two years in Costello's own state, with Republican Governor Rick Scott and a conservative legislature in charge, there have been frequent debates about whether the way to smaller government is actually through more centralized rules. This year, the legislature considered bills to preempt everything from local fertilizer regulations to Miami-Dade County's ban on pit bulls. It rejected a move to greatly limit local property taxes, but did establish more state oversight of the budgets of local water management districts.

At the same time, Florida has moved to give localities more autonomy on one front: Last year, much to the dismay of environmentalists and smart growth advocates, it abolished the state Department of Community Affairs, giving local governments more say over new development.

Perhaps nowhere have these issues come up more often lately than in Tennessee. Last April, Nashville approved an ordinance that barred any employer who contracts with the city from discriminating on the basis of sexual orientation. The next month, the state preempted the Nashville ordinance, approving legislation forbidding local governments from enacting anti-discrimination laws that go beyond Tennessee state law.

This year, legislators are considering a bill to forbid local governments from creating standards for worker benefits that go beyond state requirements. That move would overrule a “living wage” law that sets minimum wages for government contractors in Shelby County, where Memphis is located.

The legislation that may have the most sweeping potential implications in Tennessee relates to zoning. One bill rewrites land use rules for “non-conforming” properties—those that, because of local rezoning, are out of compliance with current zoning rules. Under the bill, property owners would have much more power to continue their non-conforming uses, a change that local officials feel could prevent them from making planning and land-use decisions for years. Another bill forbids local governments from changing zoning or other regulations for developments after they receive preliminary approval, even if it takes years for the projects to actually be built.

Steve Mulroy, a Democrat on the Shelby County Commission who sponsored the living wage law, ticks off all the issues on which he sees potential interference coming from the legislature: school consolidation, the living wage, smoking bans, annexation, gun control, regulation of nuclear waste and anti-discrimination laws. “The message,” Mulroy says, “is people like to talk about local control and they're all for it unless they have a substantive policy preference they care more about and then local control gets thrown to the sidelines.”

While they might not say it in quite the same tone as Mulroy, the authors of the legislation in Tennessee freely acknowledge that sometimes other policy goals take priority over deference to local wishes.

One point they make is that more state rules can mean less regulation overall. State Representative Glen Casada, a Republican who sponsored the bills barring local anti-discrimination laws and local wage rules, says he doesn't want businesses to have to hire lawyers and human resources staff every time they move into a new part of the state. “What it's trying to do,” Casada says, “is make sure that the environment across Tennessee is the same.”

Gotto, the Republican sponsor of the two zoning bills, is concerned that planning rules sometimes limit property rights. Gotto served on the Metropolitan Council of Nashville and Davidson County for eight years. He also served a stint on Nashville's metropolitan planning board. From that experience, he relates what he sees as horror stories, including one instance when planning staff recommended that a beauty salon be required to spend thousands of dollars building a sidewalk before being allowed to open, even though there were no sidewalks nearby to connect to. “We're killing these folks that just want to start a small business,” Gotto says. “We've just gone so far overboard.”

The response from localities is that the General Assembly is now going overboard in trying to micromanage their affairs. There are some signs that that message is starting to resonate.

Governor Bill Haslam, a former mayor of Knoxville, signed the law that preempted Nashville's non-discrimination law last year. Later, though, he announced his opposition to state action against Memphis' living wage law, even though he's not a living wage proponent. “I really have a problem,” Haslam said at the time, “with state governments telling local governments what to do.”

Meanwhile, regional chambers of commerce that had been in favor of some of the zoning and planning measures have shifted to a neutral stance. Marc Hill, chief policy officer at the Nashville Area Chamber of Commerce, says his focus is now on working with local officials themselves to address businesses' concerns about zoning.

The General Assembly plans to send the most sweeping zoning bills to a study committee, meaning they won't be considered in the current legislative session. Gotto argues that the U.S. and Tennessee constitutions give the legislature broad discretion to dictate to localities, but even he acknowledges that the zoning laws would be a big change, one that deserves careful consideration. “I have done all the zoning and planning I want to do,” Gotto says. “I enjoyed that, but I don't want to take that over.”