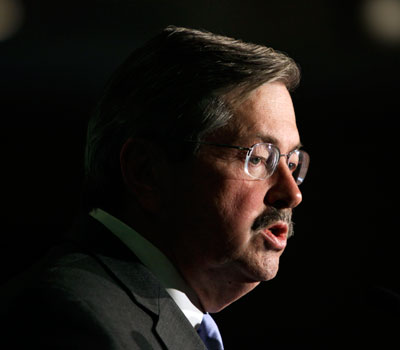 When Iowa Governor Terry Branstad stumped recently for increased higher education funding to keep down tuition, he was doing so in direct opposition to fellow-Republican legislators who control the state House of Representatives. It didn't worry him.

"The state of Iowa has a responsibility to shoulder part of the investment burden," Branstad said of higher education at a  news conference "Student debt is a major concern in our state and the debt load of Iowa graduates is unacceptably high."

The governor is calling for a $23 million increase to the budget for the state's three public universities, while House Republicans have called for a $31 million decrease from the previous year. Branstad told Stateline that with revenues currently running above expectations, he believes his increase isn't a stretch.

"We still have a tight budget," he said, "but we're in a better position. It's not like we're short revenue."

In New Jersey, Governor Chris Christie has said that with the state's spending under control, "we can begin to prioritize." His priorities include a 6 percent increase in funding to state colleges and universities and more money for scholarships. Idaho Governor Butch Otter called for $17 million in additional state support for public universities, an 8 percent increase, as well as $4 million in additional state money for community colleges, a nearly 20 percent increase. And Tennessee Governor Bill Haslam has called for more than $35 million in increased funding for higher education in his budget for next year, a 3 percent increase, along with increased capital support for higher education and a 2.5 percent pay raise for all state employees, including those in colleges and universities.

In some cases, increased funds come with some strings attached. The additional support in Tennessee is intended to pay for the state's outcomes-based performance funding model, which bases state aid on the progress students make toward their degrees.

In Michigan, Governor Rick Snyder has proposed that the state increase higher education spending by 3 percent and use the additional money to fund colleges based on four performance metrics including degree completion and affordability. The plan has already occasioned some grumbling among universities. The University of Michigan would receive less than other universities under the new plan, says university spokesman Rick Fitzgerald.

Snyder's proposal would reward improvement, Fitzgerald says, and the University of Michigan, with a six-year graduation rate of 90 percent, has less room for improvement than other colleges and universities in the state. "We're essentially at capacity," Fitzgerald says.

Chuck Moss, who heads the House Appropriations Committee, concedes that Fitzgerald has a point but says that he and other House Republicans back Snyder's measure. "We support higher education," Moss adds, "but we can't just give more and more money."

In Michigan, a 3 percent increase won't replace all of the funds lost last year, when higher education saw a 15 percent decrease in funding. Nationally, most states have a lot of ground to make up in terms of higher education funding, says Dan Hurley, director of state relations and policy analysis for the American Association of State Colleges and Universities. "We're starting at just the worst base that we possibly can," he says.

Cuts to higher education were particularly deep during the recession. With the expiration of federal stimulus dollars last year, funding was cut nationally by nearly $6 billion, or 7.6 percent, according to the Grapevine Report.

Another report released today by the State Higher Education Executive Officers found that per-pupil funding from states to public institutions was $6,290 in fiscal year 2011, the lowest level in more than 25 years when adjusted for inflation. Tuition, which has increased dramatically during the recession, now accounts for more than 40 percent of the operating revenue at public colleges and universities, according to the report.

Those increases in tuition have led to rising levels of student debt. Nationally, the average student debt for graduates in 2010 was $25, 250, according to the Project on Student Debt. Among those who have sounded the alarm about growing debt is President Obama, who has mentioned college affordability in numerous speeches in recent months. He has proposed shifting some federal aid away from colleges that don't control rising tuition and called on governors to reverse the trend of declining state support for higher education. "We can't allow higher education to be a luxury in this country," Obama said in a speech to the National Governors Association.

Iowa's average student debt is third highest in the country, at $29, 598, and Branstad says the issue was on his radar well before Obama drew attention to it nationally. Branstad first served as Iowa governor from 1983 to 1999, and he says he was still paying off his own student loans when he entered office.

"My family didn't really have a lot of money to send me to college," he says. "I'm understanding of the financial circumstances that a lot of kids who are going to college have."

In between his first period in office and his current term, which began in 2011, Branstad served as the president of Des Moines University, a private osteopathic medical school. He says that one of his major achievements in that position was tripling financial aid and scholarships for students.

But declining state support has impacted more than tuition.

Last week, leaders at the University of Northern Iowa, one of three public universities in the state, proposed eliminating a number of bachelor's degree programs, including those in French and German, and master's degrees in chemistry, computer science and biology, according to The Des Moines Register. The school also offered buyouts to 29 tenured faculty members.

Leaders in Iowa's Senate, which is controlled by Democrats, say that even Branstad's proposal is not enough. "We are not adequately funding higher education in Iowa," says Bob Dvorsky, chair of the Senate Appropriations Committee. He lays most of the blame at the foot of House Republicans.

"We have funds available," he says. "The House chooses not to spend it." But while the Senate leaders are calling for more than Branstad's proposal, Dvorsky admits that it's probably unrealistic to hope for a higher level of funding than the governor has offered.

In Iowa, as in many states, it could be years before funding is restored to pre-recessionary levels, says Hurley, of the AASCU. Despite the upward momentum in many places, governors in a number of states, notably Pennsylvania, Missouri and Kentucky, are still calling for further cuts to higher education.

"The tail is going to be a lot slower," he says. "There's going to be tight state fiscal conditions for years to come."