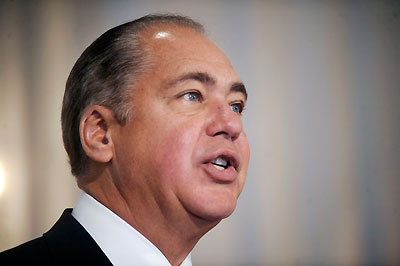 In the session that ended Saturday (March 10), lawmakers approved legislation proposed by Governor Earl Ray Tomblin pledging $30 million a year in personal income tax collections to help reduce the gap between what the state promised to pay its retired employees for health care and what it set aside to meet those obligations. West Virginia's retiree health care debt, which had reached $10 billion, was one of the highest per capita burdens in the country.

Tomblin says the health care obligation was the last big debt confronting West Virginia, jeopardizing the strength of the state's finances. "We've struggled for the last three or four years to find a solution," he told Stateline . "Now, as far as I know, we're the first in the country to address it."

It is rare for a state to tackle its unfunded long term retiree health care problem, let alone earmark a dependable stream of tax revenue to reduce the liability. In 2009, 19 states contributed nothing to their health care benefit fund, according to a review by the Pew Center on the States, Stateline 's parent organization. The study also showed that states collectively had saved less than 5 percent of their combined retiree health liability of $638 billion. Until the legislative fix, West Virginia had funded only 11 percent of its retiree health debt.

"While many states struggle with similarly low funded ratios, only West Virginia has implemented a plan to bring the funded ratio of such a large accrued liability to 100 percent," says Lisa Heller, a senior analyst at Moody's Investor Service, echoing three public pension analysts who say they know of no other state that has dedicated tax revenue for this purpose.

Far more common is for states to shrink their unfunded public pension liabilities. Nearly every state has cut retirement benefits in the last three years, though none has committed a revenue stream to cover its pension payments. Unlike pensions, most states pay retiree health costs or premiums as those expenses are incurred. But as West Virginia has shown, some states are questioning the pay-as-you-go strategy as medical costs zoom along with the number of retirees.

West Virginia's staggering retiree health funding gap had threatened to drain dollars from other pressing state services and programs, especially K-12 education. The problem stemmed from a promise the state made to its employees over the years that proved to be too expensive as health care costs rose:   West Virginia would pick up the tab for 70 percent of their health care premiums when they stopped working.   A retired employee not yet on Medicare who put in 25 or more years pays a monthly premium of only $264; the state covers the rest, or $791. Most of the state's 50,000 current retirees qualify for that 70 percent subsidy.

Ending those subsidies was the first step towards pruning costs. The public employee insurance agency's finance board voted three years ago to cut off funding of health care premiums for workers hired after July 1, 2010. For everyone hired before then, the finance board decided in December to cap the annual growth of the subsidy payments at 3 percent. The cap alone sliced $5 billion off the $10 billion retiree health care liability, though it does shift higher premium costs onto retirees.

When lawmakers returned to Charleston in January, Governor Tomblin, a Democrat,  asked them to take $30 million in income tax revenue that currently goes towards paying off a shortfall in the state workers' compensation fund and shift it toward paring down the retiree health care debt. That transfer is scheduled to occur in 2016 when the worker's comp obligation is retired.

All told, the steps taken to finance retiree health care will bring the unfunded liability under $4 billion now and eliminate it altogether by 2036, says Ted Cheatham, executive director of the West Virginia public employee insurance agency. The liability would be higher but the agency board, because of the cuts, was able to raise the discount rate it assumes it will earn on its investments from about 3 percent to 6 percent.

In addition to trimming the health care debt without raising taxes, the legislation also benefits the state's public schools. West Virginia's cash-strapped school boards have contended that the state government, not the schools, should finance health care for retired educators, although the schools have been carrying the liability on their financial statements and some have even set aside money to pay their share of the cost. The legislation transfers local school retiree health care liabilities from West Virginia's county school boards to the state. In turn, lawmakers said they would adjust the school aid formula to cut spending so that the state's retiree health care liability will not increase.

Officials estimate that this will save local schools $485 million in future retiree health payments. In the meantime, school boards can take the money they have already saved and spend it on other programs instead of handing it over to the state. That pleases Morgantown High School graphic arts teacher Sam Brunett, who says schools often are short of the money they need for crucial software updates. "Part of the charge of a graphic arts teacher is to keep up with current technology," he says. "The hope is that some of this money that has been held will find its way back to the classroom."

Unlike some states that have moved to cut off retiree health benefits entirely for future hires, West Virginia sought a softer landing. On top of the $30 million that goes towards retiring the health debt, lawmakers allocated $5 million a year from the same tax source to put into a trust fund to provide a still-to-be determined level of health care benefit for future retirees. About 7,000 employees have joined the state workforce since July 1, 2010.

"I think every state has to look at their unique situation and find a compassionate way to support their retiree health care plan," says Cheatham. "We just couldn't continue the same level of support for new people coming into the system."

Going forward, it is clear West Virginia employees will have less generous benefits then they once had. Labor unions representing teachers and other workers say they reluctantly accepted the cuts because West Virginia, like most states, could not sustain its existing retirement system without drastic changes. Health care costs are rising too fast.

"Does it give me heartburn?" asks Josh Sword, political director of the American Federation of Teachers-West Virginia. "Sure. But at the end of the day, the state cannot continue to afford this level of benefit."

Though West Virginia appears to have worked out its retiree health care crisis, the state historically has been a laggard nationally on financing its public pension system.   The funding ratio of the state's five defined-benefit plans was 57 percent on July 1, 2010, one of the lowest in the country according to the Pew Center on the States. Most analysts say states should aim for 80 percent. West Virginia makes its annually required pension payments and has instituted payment plans to satisfy the unfunded liabilities, Tomblin says.

For now at least, the state's elected officials are celebrating the retiree health breakthrough which, along with a budget surplus, has improved West Virginia's financial standing. "This shows that West Virginia is ahead of the curve," says state Senate President Jeffrey Kessler, "and that we are serious about keeping our fiscal house in order."