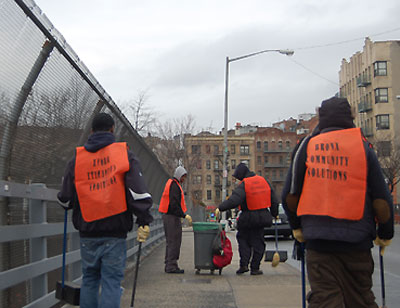 Maggie Clark
Four 16- and 17-year-old offenders clean up the streets in the West Bronx during community service mandated by the Bronx County adolescent diversion program.

NEW YORK, N.Y. — On a recent Thursday afternoon in the shadow of Yankee Stadium, in the South Bronx, five 16- and 17-year-old boys met outside the Bronx Criminal Court building to complete court-mandated community service. After appearing before a judge for nonviolent offenses such as shoplifting and graffiti, they'd been assigned to Bronx Community Solutions, an alternative sentencing organization attached to the criminal court, for an afternoon of cleaning up the sidewalks around a recreation center.

Under New York law, most offenders at this age share community service duties with seasoned adult criminals, because at 16, they are automatically charged as adults. These boys were different because they were part of a judicial pilot program that separates 16-and-17-year-old offenders from the rest of the adult criminal population, and also from younger teens. They have been given the chance to do their community service in a custom-designed rehabilitative environment.

In nine counties across New York State, these pilot programs, known as adolescent diversion parts, or ADPs, are the judiciary's response to legislative inaction on raising the age of criminal responsibility from age 16 to the national standard of 18. Currently, New York and North Carolina are the only two states that automatically charge 16-year-olds as adults, despite the mounting body of clinical research showing that a 16-year-old's brain capacity is not fully matured. In fact, when New York created its family court system in 1962, the age of adult responsibility was arbitrarily set at 16 with the understanding that the legislature would quickly revisit the issue.

Now, 50 years later, the state's chief judge, Jonathan Lippman, is taking a two-pronged approach to changing the way New York handles the 50,000 16- and 17-year-olds arrested in the state each year. For the long term, Lippman is pushing a legislative proposal designed by the state's sentencing commission to raise the age of criminal responsibility and set up adolescent courts to exclusively serve 16- and 17-year olds charged with nonviolent crimes. Most other states have juvenile courts, but none has a program specifically targeted at the 16- and 17-year-old population.

In the meantime, Judge Lippman is using the judiciary's administrative authority to set up experimental adolescent courts in all five boroughs of New York City, plus Long Island, Westchester County, Syracuse and Buffalo.

"I don't think our present system serves either public safety or life in our communities," Lippman told Stateline . "I think it's counter-productive and makes our children into hardened criminals rather than helping them lead meaningful lives."

Lippman is hopeful that the adolescent diversion program, which has been operational only since early February, will provide convincing data to show the rest of the state how it would eventually work. The goal is simple: keep 16- and 17-year-old offenders out of the regular criminal justice system as much as possible, and provide rehabilitative treatment services similar to those of a family court.

In Long Island's Nassau County, where District Attorney Kathleen Rice says she's working to make the county's adolescent diversion program a model for possible statewide use, 16- and 17-year-old offenders are being given a chance to have their problems addressed quickly and charges dismissed. The first step for each arrested youth is an interview using the youth assessment screening instrument, or YASI, a tool originally developed in Washington State that has become the standard for youth assessments in a number of court systems, including those in Virginia and Illinois.

The assessment looks a number of factors, including critical thinking skills, family factors and history of violence to determine whether a youth is at a low, moderate, or high risk of recidivism, which then determines the intervention that is recommended. For example, the state says its research shows that 96 percent of low-risk youth do not reoffend during the three years following their first arrest. In these cases, charges are generally dismissed after a court appearance. Offenders with a moderate or high risk of recidivism will have a customized treatment plan based on their needs that will then be supervised by the adolescent diversion judge.

This offender-based, rather than offense-based, approach is the crucial change, says Nassau County's director of probation, John Fowle. "Historically, if someone's been arrested, the first question the system asks is, 'What did he do?' We're still asking that question," says Fowle, "but it's not the only question. Now we're also asking 'who is he/she? What strengths do they have, what weaknesses do they have?' It's really a fundamental change."
Focusing on the offender rather than the offense is the approach being taken in a growing number of specialized courts across the country. Veterans' courts, drug courts, mental health courts and other types of offender-based venues have been growing in popularity, backed by extensive research that shows that increased attention on the offender reduces recidivism, which also reduces costs of incarceration.

Judge Sharon Gianelli was handpicked to preside over Nassau's adolescent diversion court, and takes special care to address defendants and their parents personally. When two 17-year-old girls stood in front of her on shoplifting charges, Judge Giannelli looked them in the eye and told them this was an opportunity to reclaim their future. "Your choices matter," she told the two girls, whose parents were fighting back tears as they watched from the benches. Since the girls had scored a low risk for recidivism on the youth assessment screening conducted by the Department of Probation, they had their charges dismissed on the presumption that they would not reoffend.

While dismissing charges and sending kids out in the community unsupervised may sound like a public safety risk, Nassau's chief assistant district attorney, Madeline Singas, says that the risks are greater under the old model. "Before," Singas says, "prosecutors and defense attorneys would make decisions based on their gut or their experience, and that didn't always pan out. This (system) is based on something that's scientific…that's better than we were doing before."

However, the extra time spent on assessment and the referrals to treatment do not come without new costs. And the nine participating counties have not received any additional money to make the program work. In Nassau, Rice used asset forfeiture money to hire a resource coordinator to create treatment plans, but the rest of the program is relying on existing resources.

Raising the age of criminal responsibility and setting up adolescent diversion statewide will "require cost investment up front, and counties will have to pick up the services for the kids," says David Bogard, a New York-based youth corrections consultant. But, says Bogard, "you can effectively deal with the kids in the community at a fraction of the cost of locking them up in a youth detention center."

Judge Lippman's proposal to raise the age of criminal responsibility and establish adolescent diversion statewide will be introduced later this month in the legislature. Governor Andrew Cuomo has made a commitment to treating juvenile offenders closer to their homes and supported alternatives to youth incarceration, but has not publicly expressed opinions about the ADP program.

The 53 counties not participating in the pilot are generally skeptical about it, not because they necessarily disagree with treating 16- and 17-year-olds as juveniles, but because they are worried about how the program will work logistically and who will end up funding it. The ADP program depends heavily on an infrastructure of community-based services, which doesn't exist in many of the state's rural counties. Even in densely populated Nassau, getting a handle on which services are actually available and determining if they really work continues to be a challenge.

Counties are concerned, says Katy Wallace Vescio, of the New York State Association of Counties, that the increased workload imposed on county-funded probation departments to assess more youth could turn the program into an unfunded state mandate. "To install the program without the appropriate funding might set it up for failure," she warns.

Despite the early challenges, the optimism about change is palpable, and few are expressing real doubt about treating 16- and 17-year-old offenders in a new way. "People recognize that the juvenile justice system is an abject failure," says Nassau's Rice. "However tangentially you are involved with the adjudication of 16- and 17-year-olds in the system, you recognize that it's a failure….I think people are really excited about this program."