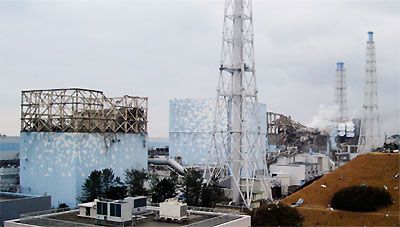 Photo AP
On March 11, 2011, at the Fukushima Daiichi nuclear plant in Japan (above), an earthquake and tsunami sparked the world's worst nuclear disaster since Chernobyl. The event effectively quashed several state efforts to pave the way for new nuclear power.
A year ago, the nuclear power industry was cautiously optimistic about an American comeback. Legislatures across the country were debating bills aimed at nuclear plant construction — something that hadn't happened for decades.

Policy makers were eager to boost domestic energy supplies, and many saw nuclear power as a no-carbon way to do it. President Obama's 2010 promise of $8.3 billion in loans for construction of two Georgia reactors further energized the movement.

"The president has given us a green light," Illinois State Senator Mike Jacobs, who was pushing to lift the state's ban on nuclear construction, told Stateline at the time.

But that was before March 11, 2011, when a massive earthquake and tsunami sparked a sequence of equipment failures and meltdowns at Japan's Fukushima Daiichi nuclear plant, exposing thousands of people to radiation in a village that remains empty. As the news of Fukushima spread, global concerns about nuclear safety suddenly reached heights not seen since 1986, when the Soviet Union's Chernobyl catastrophe caused tens of thousands of deaths.

One year later, few states have revived their nuclear efforts. That is due in part to safety concerns stemming from Fukushima, and in part to the shifting economics of the energy industry and unresolved waste storage issues.

The U.S. generates some 20 percent of its energy from nuclear power, but the consensus among experts is that the number is not likely to go up significantly anytime soon. Though last month's federal approval of two reactors in Georgia — projects that will take years and billions of dollars to complete — has sparked some optimism among nuclear advocates, experts aren't calling it a nuclear comeback.

"The industry is in fairly great trouble," says Charles Ebinger, director of the Energy Security Initiative at the Brookings Institution and a longtime proponent of nuclear power. "I don't see a lot of activity as we look out ten to 15 years."

Georgia notwithstanding, the fact is that when it comes to new construction, the U.S. nuclear industry is stuck in the past. The industry hasn't broken ground on a new reactor since the 1970s.

About a dozen states have halted nuclear construction until certain conditions are met, and one — Minnesota — has banned it altogether. Most of those restrictions came in the wake of Pennsylvania's Three Mile Island accident in 1979.

Early last year several states, especially in the Midwest, debated lifting their moratoriums. Others were considering bills that would incentivize nuclear power construction.

In Illinois, the nation's largest nuclear producing state, and in Minnesota, bills aimed at overturning restrictions had reached the governor's desk. In reactor-less Indiana and in Iowa — home to just one nuclear plant — proposed incentives for new construction had survived votes in one chamber. And in Wisconsin, newly elected Governor Scott Walker had promised in his campaign to lift his state's nuclear moratorium. But none of the initiatives survived the fallout from Fukushima.

If the disaster didn't singlehandedly derail each effort, it played a major role. "When Fukushima happened, everything went into a holding pattern," says Marshall Cohen, senior director of state and local government affairs at the Nuclear Energy Institute. Though Cohen says the disaster shouldn't have raised doubts about the safety of the industry at large, he concedes that politically speaking, "it was the right thing to do."

In Iowa, State Senator Robb Hogg, a Democrat who had opposed a bill to finance a new power plant by raising consumer utility rates, says the disaster increased legislators' scrutiny over the economics of the issue. "When disasters like this happen, it's one of those things that ratchet up the cost of nuclear power," he says.

Today, legislation to create a nuclear plant in Iowa is still under discussion in the legislature. But it is far from clear that Iowa residents would support it. A recent Des Moines Register poll concluded that 77 percent of Iowans opposed the venture. Legislators say the public is focused on a combination of safety and fiscal concerns about a plant that could cost as much as $1 billion.

"The dominant argument in Iowa," says Hogg, "is that it's too risky to put the entire cost on consumers."

Meanwhile, another obstacle to nuclear revival has emerged in the months since Fukushima: the plummeting price of natural gas. Simply put, the so-called "shale gas revolution" may be pricing nuclear out of the market.

"There must be a shortage of natural gas and stable high prices to make the economics right," John Rowe, the chairman of Exelon, the nation's largest producer of nuclear power, said in a speech last August . "Shale is good for the country, bad for new nuclear development."

In the past year, the price of natural gas has dropped by about 40 percent, reaching a 10-year low. That has prompted several companies to shift investment to natural gas and away from nuclear energy.

The shift could play out in Iowa, where William Fehrman, president of MidAmerican Energy, which hopes to build a second nuclear facility in the state, told the Des Moines Register last month that the company might build a natural gas plant if the legislature doesn't pass incentives for nuclear construction. Company representatives did not respond to Stateline's phone calls and emails asking for more details.

In addition to safety, cost concerns and the price of natural gas, nuclear power continues to confront a problem that has lingered for decades: the inability of Congress to find a place to store nuclear waste.

Waste is currently stored on site at the country's 104 nuclear plants, found in 31 states. But those storage facilities are meant to be temporary. Six states — California, Illinois, Maine, Massachusetts, Virginia and West Virginia — won't lift their nuclear moratoriums until a safe, permanent solution is found, according to the National Conference of State Legislatures .

For more than two decades, that solution was thought to be Nevada's Yucca Mountain, where the federal government spent almost $100 billion in anticipation that a permanent site would be built there. But in 2009 the Obama administration abandoned its support for Yucca Mountain, amid fierce and ongoing political opposition to the project in Nevada.

Many lawmakers and industry officials have held out hope that the administration would look again to the site, but in a report this year , the president's blue-ribbon commission of nuclear experts did not consider its feasibility. The report provided mostly broad-cased recommendations for solving the waste issue.

Some nuclear experts saw progress in the commission's acknowledgement of the problem. If Congress enacts the recommendations, says Cohen, it would be a positive step. But others, such as Ebinger, disagree. "They just left everything on the table," he says.

Despite recent setbacks, some nuclear advocates see signs of hope for the industry — especially following the approval of Georgia's reactors. "We're just as excited as anything," Cohen says of the decision.

Legislators and industry officials will be watching Georgia as they continue to consider the economics of nuclear power. All the while, a dual reactor plant in South Carolina is moving through the approval process, with most observers predicting success.

Industry officials also claim overall public support for nuclear policy. In a national poll recently commissioned by the Nuclear Energy Institute, 64 percent of respondents said they favor the use of nuclear energy in the U.S., while 81 percent said nuclear will be important to meet future energy needs.

Meanwhile, in Illinois, Senator Jacobs is planning on taking another crack at lifting the state's moratorium. "As long as I'm in the Senate, and I'm drawing breath, I'm going to push for nuclear energy," he says. "At the end of the day, this country needs energy."
Crime Labs Struggle With DNA Test Demands Introducing #StateReads
RELATED
Topics
Energy and Environment
Places
United States