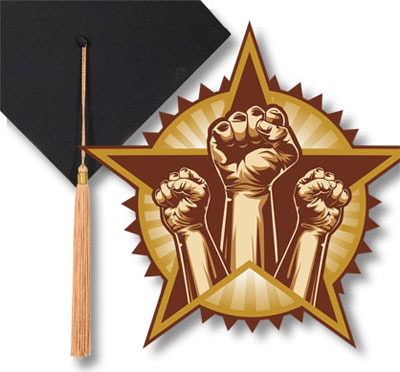 Can a graduate research assistant be a public employee? States and universities are struggling to sort that question out.

Pulling all-nighters in research labs and subsisting on little more than ramen noodles has long been a rite of passage for graduate students.

But some are now looking to unions for help setting limits on the austere lifestyle and extreme working conditions that pursuing an advanced degree often requires. They argue that state universities have made a habit of plugging budget holes by asking them to shoulder more of the teaching and research work in the place of regular, full-time faculty and staff — making it difficult for them to complete their degrees on time. Working as a research or teaching assistant, they say, is a form of employment that should entitle them to collective bargaining representation with their universities over pay, benefits and working conditions just like other public employees.

Teaching and research assistant programs usually offer students tuition reimbursement and a stipend in exchange for work they conduct under the close supervision of a faculty advisor. Often this work is tightly woven into their degree programs, with the faculty advisor also holding tremendous power over the student's academic future.

"You don't want to say no to your [advisor] because they might be on your academic committee," says Todd Reynolds, a field staff representative for the American Federation of Teachers-Maryland, which is pushing a bill in the Maryland legislature that would allow research and teaching assistants to unionize. Reynolds says the arrangement leads to power dynamics that are ripe for abuse, with faculty advisors sometimes asking their assistants to spend hours making photocopies, walking their dogs or completing other chores unrelated to their area of study.

Graduate student unionization is getting a big push this year in Hawaii, Maryland and Michigan, but the issue has actually been around for quite a while. Some 14 states — including California, Illinois, Florida and Pennsylvania — already allow collective bargaining for some graduate student employees, according to the Coalition of Graduate Employee Unions. But research assistants, as opposed to teaching assistants, are sometimes ineligible for union membership even in the states that offer it.

In Hawaii, a bill that has been approved by the House Committee on Higher Education would add both teaching and research assistants to the list of public employees eligible for collective bargaining rights under state law. University of Hawaii graduate assistants and researchers say they haven't had a raise since 2004 and are paid far less than their counterparts at other major research universities, especially when the high cost of living in Hawaii is factored into the equation. In a budget-cutting environment, they argue, they can be targets for exploitation, without access to a grievance process or other recourse.

"The university has not acted on our behalf at all to raise the salaries," says Ahnate Lin, a Ph.D. student in cognitive psychology. "It's kind of up to us at this time." Lin says that in Hawaii buying simple necessities like milk is prohibitively expensive ($5 to $6 a gallon) and rental costs are comparable to those in New York City. He says the only housing he can afford with his $17,000 annual stipend is a room in a boarding house that is dirty, needs major repairs and lacks a proper kitchen. "It's not uncommon to feel helpless," he says.

The University of Hawaii is opposing the legislation on the grounds that the work graduate assistants do is an integral part of their education. "Our goal is to train and mentor these graduate assistants so that we can get them to the point where they can function as professionals and begin their careers," says Linda Johnsrud, the university's executive vice president for academic affairs.

Johnsrud told a legislative hearing that unionization could have unintended consequences for the students because everything from tuition waivers to health insurance would suddenly become negotiable. Other university employees have seen their salaries cut as a result of budget reductions, while student assistants have been shielded from such hardship, she said.

At the University of Michigan, where unions exist and stipends are more generous, the debate has centered on who qualifies for membership. Teaching and staff assistants have long been unionized as part of the Graduate Employees Organization (GEO), an arm of the American Federation of Teachers, and research assistants were briefly included when the union formed in 1975. But research assistants were placed outside the definition of public employees in a 1981 decision by the state's Employment Relations Commission.  GEO is now pushing for a vote that would enable graduate research assistants to choose whether they would like to join a union.

The university's governing Board of Regents has voted to allow research assistants to take a vote on unionization, while President Mary Sue Coleman and a key faculty committee oppose such a move on the grounds that dissertation research is an integrated part of graduate student education. Those efforts have prompted the Michigan Employment Relations Commission and a state administrative law judge to review the 1981 decision to determine whether there have been material changes to the relationship that the university has with its graduate research assistants.

Proponents of unionization argue that the university now leans more heavily on graduate assistants to fulfill its research-focused mission. The Michigan Senate passed a bill last week that would render that argument moot by explicitly excluding research assistants from the state's collective bargaining law for public employees.

The debate has exposed large fault lines dividing students and faculty on the question of who is a "student" and who is an "employee," and who needs protection from whom. "As professors and graduate program administrators, we view it as a serious affront when our students are treated like employees," Victor DiRita, a professor and associate dean at the University of Michigan Medical School, said at a January Regents meeting. "These young trainees are not our employees: We do not think of them in that way, and we do not want them to think of themselves that way. Throughout the training of each student, we have our sensitivities attuned to any indication that the student is being treated as the employee of a thesis advisor."

A group calling itself Students Against Graduate Student Research Assistant Unionization is working with the Mackinac Center Legal Foundation on a legal strategy and public relations campaign opposing unionization. The group argues that the benefits of unions are dubious and the costs are high — a mandatory 1.53 percent paycheck deduction even for those who don't choose to join. "We feel like the university has our best interest in mind more than the union does," says Stephen Raiman, the group's founder and a Ph.D. student in nuclear engineering. "This is not a profit-driven corporation that's trying to get as much work out of us for as little wages as they can. It's an educational institution."

In a video that makes the case against unionization, research assistant Melinda Day worries about how inserting a third party into the supervision of her research might be harmful as she pursues a Ph.D. in biology. "It would hinder our ability to do science," Day says. "Cells don't know that work hours are 9 to 5. Cells don't know when it's the weekend. I recently completed an experiment that involved taking samples every eight hours. I wouldn't have been able to do that under the strict work-hour regulations the GEO wants."