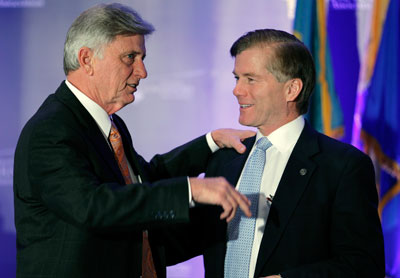 Virginia Governor Bob McDonnell, a Republican (right), speaks with Arkansas Governor Mike Beebe, a Democrat (left), during the National Governors Association meeting in Washington on Sunday. Both told Stateline that jobs and the economy will decide the 2012 presidential election.

The leaders who know the political landscape in their states the best — the nation's governors — say that the 2012 presidential race will likely turn on how well the economy is performing by the middle of October.

If the unemployment rate stays high and voters are still pessimistic about the future of the country two weeks before the November 6 election,   Republican governors say, the party has a decent chance of denying President Obama a second term.

But if the economy continues adding jobs each month, as it has for 23 straight months, Democratic governors say Obama can win re-election, especially if his personal popularity remains above 50 percent.

Republican and Democratic governors offered this view of the presidential race in interviews during the annual winter meeting of the National Governors Association in Washington, which ended Monday (February 27). The election dominated the hallway talk of the conference, and no wonder:   The White House winner is crucial to governors because the president and his policies have a direct bearing on the condition of state governments.

Stateline interviewed 19 governors — 10 Republicans and nine Democrats - from all regions, asking each what their party needs to do to win the election. They caution that the themes and tactics of the fall campaign could change before the fall, depending on who wins the GOP nomination and on events in the economy. But right now nearly every governor says the party that is able to convince voters it has a better plan to create jobs will emerge victorious on November 6.


"In Nevada, I need to get people back to work," says Governor Brian Sandoval, a Republican in a state carried by Obama in 2008 that is shaping up as a battleground. The GOP governor of another key state Obama won four years ago, Pennsylvania's Tom Corbett, says if Republicans hope to defeat the president, "We have to have a vision of how to grow jobs and the economy. In Pennsylvania, that message will resonate."

Democratic governors, many of whom discussed campaign themes at a private meeting with Obama at the White House on Friday (February 24), say the president must emphasize that the United States still has not resolved every challenge but that the country is steadily rallying from the worst economic crisis since the Great Depression.   When the president took office, the nation was losing 750,000 jobs a month; in January there were 250,000 jobs created.

"The American people know who drove the truck into the ditch," says Governor Dannel Malloy of Connecticut, referring to former President George W. Bush. "For a while they didn't think he [Obama] could get the truck out of the ditch. Now he has. He is prepared to tell the story of success in job creation."

Along with jobs, GOP governors say their nominee should tell voters he would slash the federal budget deficit more deeply than Obama is proposing. Governors are more sensitive than most public officials about deficits since they are required by law to balance their budgets.

"It won't be enough to simply point out how poor the economy is performing. Most folks know that already," says Republican Governor Mitch Daniels of Indiana. "We need to   present a strong pro-growth and debt reduction plan to the country." Adds GOP Governor Dennis Daugaard of South Dakota: "I worry our country is going down the road of Greece and Portugal unless we take steps to cut these entitlement programs."

Democratic Governor Martin O'Malley of Maryland, who heads the Democratic Governors Association , says the GOP does not own the debt issue, noting that he has had to cut $7.5 billion in state spending. He says  Bush's tax cuts have been the primary driver of the national debt. Asked whether it was wise for Democrats to continue faulting Bush, when polls show independent voters are turned off by both parties blaming each other, O'Malley says it is important for Obama and Democrats to keep Republicans honest about the cause of the deficit.

"Many in their party would like you to believe the deficit was racked up in Obama's first five months," O'Malley says. "We have a deficit because of the choices of the Bush administration to cut taxes for the wealthiest Americans."

Independent voters and women will decide the election in the battleground states, the governors agree. O'Malley and other Democratic governors say it is important for Obama to play up differences between the parties on social issues as a way to persuade those voters that the GOP cares more about such subjects as banning same-sex marriage and mandating invasive ultrasounds of pregnant women than it does about jobs and the economy.

Governors Robert McDonnell of Virginia and Rick Snyder of Michigan, Republicans from battleground states, say the eventual GOP nominee — both support Mitt Romney — should steer clear of social issues in order to appeal to independent voters, much as they both did in their own statewide campaigns. "I ran a positive campaign," Snyder says. "We won because we talked about the future and focused on jobs and kids (education)."

McDonnell was embroiled in a dispute last week in which he retreated from supporting a bill that could have required women to submit to vaginal probes before having an abortion. The Virginia governor, who heads the Republican Governors Association , says although moral issues are important, the GOP nominee should stress pocketbook concerns to win independent votes.   "Unfortunately, there has been an undue focus on social issues," he says. "That's not what people are talking about around the kitchen table. They are talking about jobs, families, debt, the cost of a higher education and transportation."

A sharp tonal difference between the parties emerged over the weekend over how Obama and the GOP nominee should talk during the campaign about the future of the country. Democratic governors say the 20 GOP presidential debates have been dominated by pessimistic predictions about the economy and the country's direction. The governors and Obama, during Friday's private meeting at the White House, agreed the Democrats should present a more optimistic, sunny view of the economy that stresses its steady improvement.

"America is the most powerful economy in the world," says Vermont Governor Peter Shumlin, one of 15 governors at the White House meeting. "We didn't build this nation by being down in the dumps. When I watch these Republicans running for president, it's all doom and gloom. My message is: cheer up, guys."

Republican governors say they are simply reflecting a majority of Americans' views — backed up by public opinion surveys  - that the country is on the wrong track and that fear about losing a job or finding one is a key reason for that despair.

"People are scared over what is the route forward," says Kansas Governor Sam Brownback, a Republican, recounting how 80 percent of the hands in a room go up when he asks Kansans if they are worried about the future. "They want someone with a plan."

The Democratic governors from Obama's home states, Neil Abercrombie of Hawaii and Pat Quinn of Illinois, say Obama's personal popularity will be pivotal. "The Republicans have made a big mistake personalizing this race and demonizing the president," Abercrombie says. "When the Republicans finally put a horse on the track then the comparison will start on leadership and these [GOP] candidates won't measure up."

Corbett of Pennsylvania concedes that "an incumbent always has an advantage" but says it will not matter if Americans do not see Obama making enough progress on jobs. "Where the economy is in mid-October will play a major part in this election."

During the Democrats' White House meeting with Obama, Governor Brian Schweitzer of Montana asked Obama whether he had the "fire in the belly" to run another national campaign and whether the family — including Michelle and their two daughters — were prepared for what could be a nasty race. Obama left no doubt he is prepared for the campaign, telling the 15 governors about the importance of this moment in history:   that he inherited the worst financial mess in over 60 years but has had success in doing things to repair the economy, such as rescuing the automobile industry. "When he finished, you could have heard a pin drop in the room," says Colorado Governor John Hickenlooper. Then the governors broke into applause.

As the governors filed out of the room, Obama made a point to seek out Schweitzer. "He put his arm around me and said, 'Don't worry, Brian. I'm a fourth quarter quarterback,'" Schweitzer said.