Stateline
Stateline Article February 23, 2012 By: Ben Wieder Read time:
Share
Twitter Facebook LinkedIn Email Print
Share
Gambling Revenue Promises Rarely Met
More than two-thirds of states that legalized casinos, lotteries or racetrack casinos in the past 10 years have yet to see the state and local revenue that political and industry champions of legalization had promised.

No state helped the gambling industry come out of a two-year recessionary slump more than Pennsylvania, which has seen more than a $1 billion increase in revenue during the past two fiscal years.

That growth has catapulted the state's industry to near the front of the pack nationally, with some experts speculating that it could soon overtake New Jersey, home to Atlantic City, as second only to Nevada in overall gambling revenue. With state and local tax rates on those profits significantly higher in Pennsylvania than Nevada, the Keystone state already sees more of a revenue bump from gambling than any other state in the nation.

But while those tax revenues have risen steadily over the past few years, they have yet to achieve the goal promised by former Governor Ed Rendell when he first stumped for the legalization of slot machines eight years ago: $1 billion in property tax relief for Pennsylvanians.

The state was more than $200 million short of that target last year, and though the state still expects up to four new gambling facilities to open at some point, officials aren't sure when — or if — they'll meet Rendell's promise. "We'll have to wait and see," says Richard McGarvey, a spokesman for the Pennsylvania Gaming Control Board.

This fall, Massachusetts became the 16th state to legalize commercial casinos, with Governor Deval Patrick and other backers of the law estimating that it would ultimately bring the state  about $400 million a year. But Massachusetts and other states, such as Florida and New York, that are considering legalizing commercial casinos might rethink their estimates based on the track record of other states that recently legalized gambling.

A Stateline analysis of 13 states that have legalized casinos, racetrack casinos, known as racinos, or lotteries in the past 10 years found that more than two-thirds of them failed to live up to the initial promises or projections made by political and industry champions of legalizing gambling. That doesn't account for inflation or the cost of any of the potential negative consequences of gambling, such as increased addiction or crime, that are often cited by opponents of legalization. 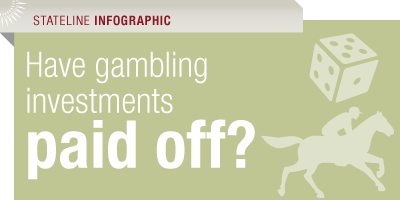 Explanations for the missed targets vary. Some officials and experts say the recession is to blame, while others cite a gambling market that is nearing saturation as more states see gambling as a revenue fix rather than a tool to drum up tourism or development.

Lotteries without the 'bells and whistles'

While on the campaign trail in 2002, former Oklahoma Governor Brad Henry predicted that a lottery could bring the state $300 million a year to help education. The Democrat later revised those numbers down to $150 million, but the actual return has been more like $70 million.

"The people who made the initial estimates weren't very good at it," says Jim Scroggins, executive director of the Oklahoma Lottery Commission. "The numbers didn't really make much sense."

Scroggins says the initial projections included video lottery, which was stripped from the authorizing legislation before it passed. He says the projection also took an overly optimistic look at well-established lotteries in other states.

The Oklahoma lottery is further limited, Scroggins says, by a mandate requiring that 35 percent of its profits go to the state, limiting large jackpots and expansion.

Another state with ambitious projections was Arkansas, where the lottery hasn't yet provided $100 million for college scholarships in either of its first two years, as was promised by former Lieutenant Governor Bill Halter. That still remains the goal, says Julie Baldridge, director of public affairs and legislative relations for the Arkansas Scholarship Lottery. But she doesn't see it growing too much beyond that.

"We have what I would describe as a plain vanilla lottery in Arkansas," Baldridge says, citing the lack of video lottery or keno as factors that limit revenue. "We're going to make less money than a lottery that has all the bells and whistles."

They don't have bells and whistles in South Carolina, either, but the state's lottery has exceeded initial projections every year since 2003, its first full fiscal year. Former Governor Jim Hodges championed the lottery when he ran for office in 1998, saying it would yield the state $150 million a year. It's actually brought the state about $270 million a year, most of which goes to education.

Paula Harper Bethea, executive director of the South Carolina Education Lottery, says the state's success in part is due to the popularity of the big jackpots in the multi-state Powerball and Mega Millions games, which draw a wider range of customers, but also because of frequent market testing. Her agency conducts focus groups three times a year with customers across the state to determine what appeals to them most about different games and formats. "Colors really matter," she says.

South Carolina's early success, however, is an anomaly. Even among other states that have met expectations, success hasn't been immediate. New York has exceeded the $300 million to $400 million annual target for racino tax revenues promised by legislators in 2001, but that mark was met three years later than expected. North Carolina didn't collect an anticipated $400 million from its state lottery until the lottery's third full year — four years after the legislation passed.

The impact of the recession

The recession, which caused the gambling industry to post negative growth numbers in 2008 and 2009, has been to blame for some of the delays in states that have missed expectations so far.

Stephen Martino has seen first-hand its impact on two states in the past few years. He was executive director of the Kansas Racing and Gaming Commission when the state legalized casinos in 2007 and then became director of the Maryland State Lottery Agency, which oversees casinos, in April 2010, months before the state's first casino opened.

In Kansas, he says, three of the four initial casino plans fell apart because of changed conditions during the recession. "People had bid based on one set of expectations in 2007," he says, "that was no longer the case in the fourth quarter of 2008." It took nearly two and a half years for the state's first casino, in Dodge City, to open, in December of 2009. The state's second and third casinos, in Mulvane and Kansas City, opened only this winter.

The recession slowed construction on Maryland sites, but there have been other hurdles as well. Progress on one of of the state's largest planned facilities, Maryland Live! Casino, at the Arundel Mills Mall in Hanover, was delayed by an unsuccessful effort by gambling opponents and horse racing interests in Anne Arundel County to block the casino's approval. It's now scheduled to open this spring.

Already, the state has revised downward its initial $660 million estimate of tax benefits to the state. Part of the reason is that casino operators so far aren't going for the maximum number of slots allowable at each location. Maryland has the country's second highest tax rate on slot revenue, according to the American Gaming Association, with the state getting two-thirds of profits. "Some companies said it's not even worth it to bid on these licenses," says Holly Wetzel, a spokeswoman for the American Gaming Association. "Companies have to feel like they're going to get a return on their investment."

There's no rule of thumb on how much tax is too much, but tax rates are generally higher among states that more recently legalized gambling than some of the first states, such as Nevada and New Jersey, which have tax rates in the single digits.

Lucy Dadayan, a senior policy analyst at the Rockefeller Institute of Government who studies state gambling revenues, expects that trend to continue. She cautions, though, that the industry may be near a saturation point. Pennsylvania's growth, for example, has come largely at the expense of New Jersey. It can be risky to rely too heavily on gambling revenue, she says. The Garden State is one of seven states that continued to show a decline in revenue in the last fiscal year. "States shouldn't think of gambling revenue as recession-proof," she says.

That states would rely heavily on gambling revenue is itself a relatively new idea, says David G. Schwartz, director of the Center for Gaming Research at the University of Nevada, Las Vegas. When gambling in Atlantic City was legalized in the 1970s, he said discussion was more about the prospect of urban renewal than it was about tax revenue.

He thinks states would be wiser to also emphasize economic development when looking to legalize gambling, rather than merely focusing on revenue. "At the end of the day, the state's always going to need more money," he says. "If you're looking at casinos as a way to solve the revenue problem, then you're never going to be happy."