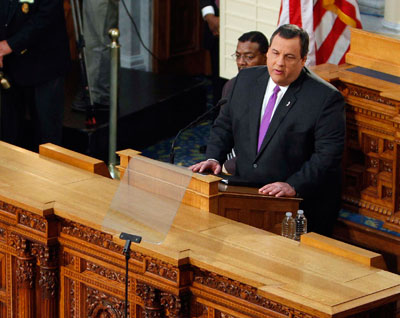 Republican Governor Chris Christie of New Jersey is calling for an across-the-board 10 percent cut in the state income tax.

As state lawmakers gather for their 2012 legislative sessions, taxes are emerging as a key issue, with at least half a dozen Republican governors pressing for sweeping tax cuts and just as many Democrats pushing for tax increases.

One of the biggest tax battles will be in New Jersey, where Governor Chris Christie is calling for an across-the-board 10 percent cut in the state income tax. "This will send a loud signal," the Republican governor said in his state of the state speech this week. "The New Jersey comeback has begun."

Democrats, who control the legislature and went along with Christie's plan to overhaul the state pension system last year, are scoffing at the tax-cut plan.

Meanwhile, Maryland Governor Martin O'Malley is proposing to raise taxes on people who earn six-figure salaries to help close an expected $1 billion budget shortfall. "I don't like asking for this; I don't like doing this," the Democrat said in a press conference, as reported in The Washington Post . "But in order to get us through this recession in advance of other states, and in order to protect the priorities of the people of our state and the futures of our children, there are difficult things we need to ask of one another … this is one of them."

The clash over taxes is indicative of where state budgets are in 2012, now that the worst of the fiscal crisis is over in most states. Revenues have recovered enough that a number of states have begun predicting small surpluses — a dividend that some governors are inclined to give back to taxpayers. On the other hand, revenues remain below their pre-recession levels, and many states are projecting deficits for the year ahead. So for other governors, the priority is finding new money to fill budget gaps, or to backfill some of the budget cuts they've had to make over the past four years.

Meanwhile, lingering weakness in the economy has governors of both parties unveiling big plans to create jobs. New York Governor Andrew Cuomo, a Democrat, wants to provide $1 billion in incentives to lure companies to Buffalo and build the nation's largest convention center in Queens. In Georgia, Governor Nathan Deal, a Republican, is seeking to deepen the Port of Savannah, upgrade Atlanta roads and make his state home to " a destination for cancer research. " And in Minnesota, Governor Mark Dayton, a Democrat, has pitched borrowing $775 million for public works projects that he says would create 21,700 jobs.

But it's the issue of taxes, always a flashpoint between the parties, that is already front and center this election year.

Christie, who had been courted to run for president, is not the only Republican calling for extensive tax cuts. Kansas Governor Sam Brownback wants to lower the individual income tax and eliminate many income tax credits, deductions and exemptions, changes that he says would make the tax code "fairer, flatter and simpler ." In New Mexico Governor Susana Martinez wants to exempt nearly half of the state's small businesses from the gross receipts tax. And Iowa Governor Terry Branstad wants to reduce commercial and industrial property taxes by 40 percent. "These taxes must be reduced ," Branstad told the legislature in his state of the state address, "not because they cost businesses money, but because they cost Iowans jobs."

Many Republican governors called for tax cuts last year and were successful in reducing business taxes in several states, including Arizona, Florida, Indiana and Michigan. But some of the proposals didn't pass last year and are getting a second airing in 2012. Alaska Governor Sean Parnell, for example, is once again pressing to reduce taxes on oil companies , which he says could bring at least $5 billion in private-sector investment to the state. In South Carolina, Governor Nikki Haley says she wants to eliminate the corporate income tax — a theme she repeated often during her 2010 campaign for office. She also wants to flatten the state's six income tax brackets down to three.

Republican governors of Arizona and Idaho likewise are calling for tax cuts in 2012, but they haven't specified which tax or taxes they would cut.

But for some Democrats, raising taxes is the only way to maintain state services that have already been cut during the recession and its aftermath. In Washington State, which faces a $1 billion deficit, Governor Chris Gregoire wants voters to approve a half-cent, temporary sales tax increase and put the extra money back into schools and a "frayed" safety net. "Without the half penny, we lose far more than we gain," she told the legislature this month. "We lose our future, our values and our way."

Likewise, California Governor Jerry Brown wants to turn to voters for approval to raise taxes to help close the state's chronic budget deficits. Brown is already gathering signatures for a ballot measure that would include temporary increases in the sales tax and the income tax on individuals making at least $250,000 a year or joint filers making at least $500,000. If it passes, Brown told lawmakers this week, "schools will be in a much stronger position," given the cutbacks to education in recent years.

Whether to tax high wage earners more — a likely issue in the 2012 presidential campaign — has been bubbling at the state level for years. Christie made a point in his state of the state address to chide Democratic governors in nearby Connecticut and New York for recently raising taxes on the wealthy, as well as Brown for proposing to raise the top rate in California. "Let others choose tax increases," Christie said. "We choose responsible tax cuts to give our overburdened citizens real relief."

Other Democrats are targeting a tax increase to pay for certain projects. North Carolina Governor Beverly Perdue wants a temporary sales tax increase of three-quarters of a penny, with the revenues going to public education. Washington's Gregoire would like a $1.50 fee on every barrel of oil produced in the state of Washington to pay for a 10-year transportation package.

Putting money back into programs

The uptick in state revenues is allowing governors of both parties to seek to replenish some of the programs that were cut to balance budgets.

Florida Governor Rick Scott wants $1 billion put back into education after $1.3 billion was pared from school budgets last year. "This is the single most important decision we can make today for Florida's future," the Republican told lawmakers this month in his annual address. The governors of Arkansas, Georgia and Virginia are among others seeking to add more state dollars to education.

The budget situation in Arizona has improved so much that Republican Governor Jan Brewer wants to buy back the three state buildings that the state sold and leased back to help balance the budget during the peak of the fiscal crisis. "Together, we can celebrate the burning of that mortgage," she told lawmakers.

And in New Mexico, Governor Martinez wants to use money from selling the state jet to buy all New Mexico first graders a reading book of their own. "Every child will get this book when they leave kindergarten, so that every family will have the opportunity to teach their children."