A long siege of deadlock and dysfunction in Washington has left states frustratingly unclear what to expect from the federal government in the coming year. About the only thing they know for sure is that it is not going to be a year of generosity.

In fact, it's likely to be quite the opposite. As a result of last summer's deal to raise the federal debt ceiling, and the consequent failure of the congressional “super committee” to decide on budget cuts, states are bracing for automatic across-the-board cuts in education, social welfare and other programs for the upcoming 2013 fiscal year. Those cuts would come atop federal cuts in 2011 and 2012, not to mention the continuing wind-down of federal stimulus aid.

Partisan standoffs between Congress and President Obama aren't just related to the budget. Long overdue legislation setting federal policy for states on key issue areas remains stuck, making it difficult for states to know what to expect in 2012 and beyond. “For states, the uncertainty creates planning and budgeting problems in both the immediate and long run,” says Dan Crippen, executive director of the National Governors Association. “Governors will soon present budgets to their legislatures without knowing if, and in what form, programs such as transportation, ESEA (education) and TANF (welfare) will be reauthorized.”

Republicans made good on their promise to rein in spending when they took command of the U.S. House after the 2010 elections and gave Washington divided government. And a huge GOP target was the amount of federal money sent to the states, which in the past has accounted for one-third of state revenue.

Last year, states had to wait almost until Christmas — six months into fiscal year 2012 for most of them — to find out how big a chunk Congress was taking from key discretionary programs such as low-income housing, Head Start and worker training. The overall result was nearly $5 billion fewer federal dollars for state programs, or a 2.7 percent cut from fiscal 2011, according to Federal Funds Information for States, which provides federal funding data to state lawmakers and governors.

Those cuts came on top of already-large reductions in certain programs the previous year — cuts that were largely overlooked because states were still getting so much support at the time from the federal stimulus program. “States got hit hard in FY 2011, which isn't widely appreciated,” says FFIS Executive Director Marcia Howard. Taken together, states will have seen a 7.2 percent decrease in federal aid for major programs between 2010 and 2012, nearly $14 billion in all. “The compounding of these cuts is getting to be significant,” Howard says.

Michael Bird, senior federal affairs counsel at the National Conference of State Legislatures, says the cumulative drop in federal funds is the most significant in recent memory. “I can't think of a time when the cuts were as deep as these.”

But deeper ones are coming.

The failure of the congressional “super committee” to come up with a plan to reduce the federal deficit set up automatic across-the-board federal spending reductions. While those cuts wouldn't begin to take effect until January of 2013, states have to budget now for a fiscal year that in most cases starts in July of 2012.

Assuming no change in the rules by Congress, the cuts are to be split evenly between defense and domestic spending, except for entitlement programs, including Medicaid, which are spared. States such as Maryland, Virginia and Texas, with economies heavily dependent on military bases, defense contractors and armed forces procurement, could see their tax revenues shrink significantly because of these cuts. “I don't think there is any question that we are going to have to tighten our belts,” says Republican state Representative Dan Flynn of Texas.

But all states would feel the squeeze from an across-the-board cut in domestic programs. While the exact amount of the cuts that would come from this so-called “sequestration” process won't be known until next year, FFIS used an 8.8 percent figure to provide rough estimates for states to plan by. In dollar terms, cuts of that magnitude would result in a reduction of more than $9 billion from fiscal 2012 levels. In California alone, nearly $1.3 billion is at stake for work study programs, special education, juvenile justice grants and many other programs.

“Clearly the poorest people and families in the country are not the focus of concern in the Congress — which is my biggest worry,” says Ruth Kagi, a Democratic state representative from Washington State.

But future cuts to domestic spending could be even deeper than the current agreement calls for. Already, there is rumbling on Capitol Hill that defense should be relieved from bearing half the burden. “We'd like to get it changed,” says Republican U.S. Senator John Hoeven. If defense programs were shielded from cuts, it could mean that states would see an even bigger reduction in federal funds for domestic programs. Hoeven, who spent a decade as governor of North Dakota, says he sympathizes with states' plight. “We have to find savings and that obviously will have an impact on states …That's just part of getting the deficit under control.”

But where will the savings come from? The states probably won't get a whole lot more clarity on that question before they have to write their budgets for the coming year. Nick Johnson, vice president for state fiscal policy at the Center on Budget and Policy Priorities, a liberal think tank in Washington, D.C., predicts that presidential politics will push big decisions off until after the November elections. He thinks the most likely decision time for further state spending cuts may be a lame-duck session in late November or December.

Election-year politics will likely derail any major reforms in federal tax or entitlement policy. But states can't even count on knowing for sure what tax rates to expect in 2013. Reduced federal income tax rates first enacted under President George W. Bush, and later extended, are set to expire at the end of 2012. Some states, such as Maryland, are assuming these tax breaks will in fact end — a result that in Maryland's case would have both positive and negative effects on the state's revenues. But none of them will know for sure until the presidential election is over, and perhaps not for some time after that.

The one bright spot is that revenues are up for states, although the amount is not anywhere near enough to replace the billions states got from the federal stimulus package. The latest data from the National Conference of State Legislatures show that over the last four years, states closed more than $500 billion in budget gaps. However, for early 2012, NCSL reports, “new gaps are practically non-existent.”

Some states aren't waiting to hear just how big the federal cuts will be. Massachusetts is counting on a 10 percent reduction in federal funds. That could mean deeper cuts to safety net services and education programs like METCO, which sends inner city kids to schools out in the suburbs. “It's really frustrating,” says Sean J. Fitzgerald, chief of staff to Democratic state Representative Jay R. Kaufman. “METCO and other well-deserving programs have already seen cuts and the fear is there will be more,” but he says the uncertainty makes it hard to plan.

In Utah, agencies have gone through an exercise to figure out what they would need to do if federal funds were cut either by 5 percent or by 25 percent. Utah is often touted as one of the best-managed states and one that is least reliant on federal funds. But that's not a great deal of comfort to Republican state Representative Ken Ivory, who introduced the state legislation requiring the contingency plans. “That's like being called the best-looking horse in the glue factory,” he says.

Ivory, like many others at all levels of government, says the entire relationship between the states and the federal government is out of whack. “We've got to have the partnership discussion and clearly define the lines,” he says. “This is your job. This is our job.” 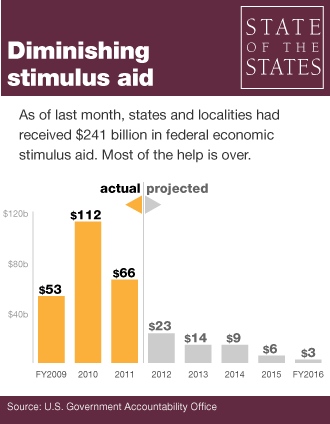 In the meantime, even if election-year politics gets in the way of substantial changes in the relationship between states and the federal government, states would at least like Washington to stop the political brinkmanship. “Make a decision,” says Warren Deschenaux, the chief fiscal analyst for Maryland's nonpartisan Department of Legislative Services. “Tell us what's coming so we can deal with it.”