Leroy Steinke, who is 87 years old, used to drive his wife and a neighbor to doctors' appointments and other errands on the North Side of Chicago. Then Steinke's health declined, and he knew they would all need to find another way to get around.

That's why Steinke was relieved to hear that Illinois Governor Pat Quinn is expected to sign a measure making it easier for volunteer drivers to come in and take the elderly where they need to go without having to spend more of their own money on car insurance.

"We desperately need this," says Steinke, who is active with Independent Transportation Network of America ( ITN America ) , a national organization that tries different ways to help older people with their transportation needs at a time of dwindling state and city funds and growing demand.

States this year have cut various programs that serve the elderly, but the approaches ITN uses don't depend on state money. They recruit a roster of drivers large enough to guarantee seniors rides 24 hours a day, seven days a week. The services delivered through ITN aren't completely free to the passengers, but they don't compete with public transportation for scarce taxpayer dollars either. 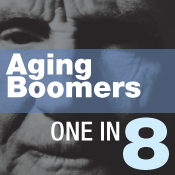 The aging Baby Boomer generation is one reason states are paying attention to programs like ITN. The number of Americans age 65 and older is expected to increase to more than 55 million by 2020. For many of these people, public transportation will not really be an option. Four years from now, according to a new report from Transportation for America, a group that advocates improved mobility, more than 15.5 million senior citizens will live in communities where public transportation service is poor or non-existent. Even seniors who live in cities with extensive subways and bus systems may have difficulty using them if, like Steinke, they walk with a cane and carry an oxygen tank.

One of ITN's ideas is to allow elders free rides if they are willing to donate their cars to the program. But this has complications. As Stateline reported earlier, when ITN launched this experiment in Maine it received so many cars that it needed the state legislature to give it an exemption from auto dealership rules. Otherwise, the group risked getting into legal trouble when it sold some of the vehicles to pay for gas, maintenance and other operating expenses. Another Maine measure also prohibited car insurance companies from raising rates for volunteer drivers.

Indeed, ITN's legal challenges often can be solved only at the state level. The states have generally been willing to cooperate. Connecticut, Florida and Kentucky all have passed measures that essentially allow ITN affiliates to operate locally without running afoul of insurance, auto dealership or livery laws. Illinois will have a similar law when Governor Quinn signs the bill on his desk. An affiliate in Boston is still waiting for the state to help out.

The insurance issue is crucial. "How could we recruit volunteers if we have to tell them to call their insurance companies first?" asks Joyce Gallagher, executive director of Chicago's Senior Services Area Agency on Aging. The program there was essentially on hold for a year until the recent legislation got the insurance problem cleared up.

ITN uses a combination of paid and volunteer drivers.  This allows the organization to guarantee a ride 24/7.  If it used only paid drivers, the service would be far too expensive for most customers, but if it used only volunteer drivers, "we could not possibly meet the demand for rides," says Freund. Volunteers use their own automobiles and receive either a mileage reimbursement for occupied miles (when a passenger is in their car) or transportation "credits" for rides.  Paid drivers are part time and often retired.  The vehicles they drive are usually donated to ITN or traded to ITN for rides.

Many of the drivers who volunteer to help seniors in the ITN program are themselves elderly. By participating, they earn credits that they can store and use later as they grow older, or donate to family members or the poor. Seniors who use the service pay an annual membership fee of $40 for an individual, or $65 for a family. Fees for individual rides depend on mileage and are lower if arrangements are made ahead of time. Community groups and local merchants also donate credits to help pay for seniors' rides.

In Massachusetts last month, a constituent showed up at House Majority Leader Ronald Mariano's office asking about door-to-door transportation to and from medical appointments. The man did not have a driver's license, and the local public transportation site was too far for him to walk; he also did not have family or friends in the area to assist him. "In these situations," says Mariano's chief of staff, "ITN will be an invaluable asset to our communities."

But the program needs legal clearance in Boston before it can offer services there. In all likelihood, the legislature will have to make insurance and auto dealership fixes as Maine did.

With the help of the Silver Century Foundation and the Rappaport Center at Suffolk Law School , ITN is creating a website laying out the policies in all 50 states that help or hurt efforts to provide rides to seniors. In the meantime, Chicago is ramping up its program, looking for volunteer drivers and donations.