Stateline
Stateline Article July 1, 2011 By: Mary Mahling Read time:
Share
Twitter Facebook LinkedIn Email Print
Share
Infographic: Wyoming First in Federal Dollars Per Capita
The federal budget provides about 30 percent of state revenue, making it the largest single source of funds for many states. But the feds are more generous with some states than with others, according to an analysis by Federal Funds Information for States , which tracks budget policy. Some Western states receive a greater proportion of federal grants in the form of revenue from leasing rights to the rich resources being extracted on public lands. That's the primary reason why Wyoming rakes in the most federal dollars per capita. Some states receive fewer federal dollars because they operate relatively modest Medicaid programs that trigger a smaller amount of matching federal money. That's the primary reason why Nevada gets the least federal funding per capita. 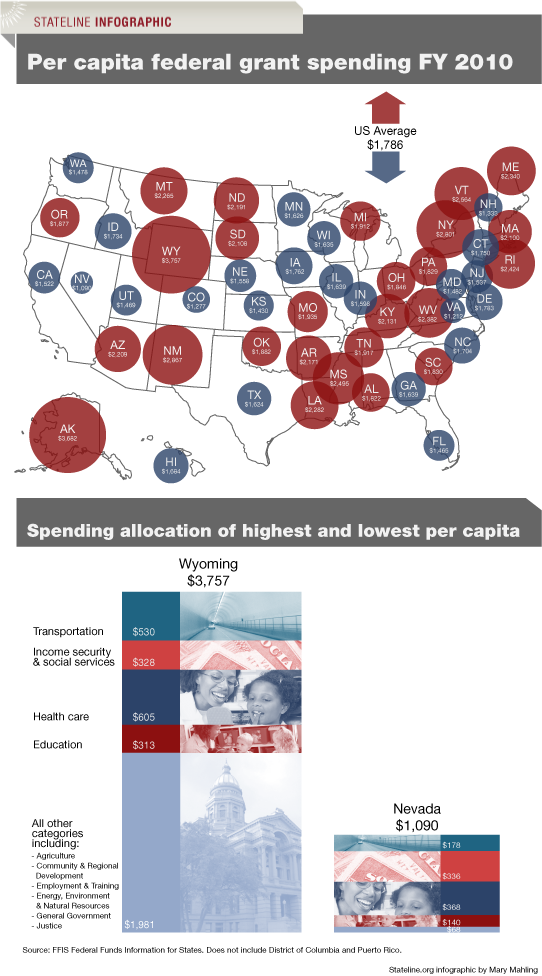 Arizona Medicaid Cuts to Go Into Effect Fate of Florida Commuter Rail Line Up to Governor
About Stateline
Stateline’s team of veteran journalists provides daily reporting and analysis on trends in state policy.
Learn More
Media Contact
Jeremy Ratner
Director, Communications
202.540.6507
Sign Up
Sign up for our daily update—original reporting on state policy, plus the day's five top reads from around the Web.