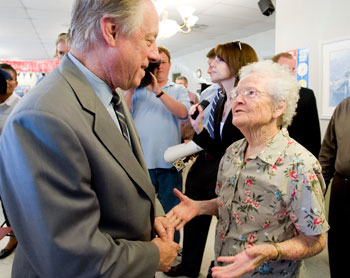 Governor Phil Bredesen speaks with people in Chattanooga about a new long-term care law that promises to provide home and community based services for thousands of Tennesseans.

NASHVILLE, Tenn. — After lagging behind the rest of the country for years, Tennessee is catching up fast when it comes to changes in its health care system aimed at elderly and disabled residents. More of them are getting the assistance they need in their homes — at a much lower cost than at a nursing home. A lot of this change is the direct result of efforts by Governor Phil Bredesen.

Nearing the end of his eight years in office (he is required to leave due to term limits this year), Bredesen decided to focus on getting Tennessee off the bottom rung in rankings of states that offer consumers choices in long-term care. Just a few years earlier, only a few hundred Tennesseans were able to get Medicaid funding for anything but a nursing home. Now, it is one of a handful of bellwether states that offer a broad range of alternatives to nursing home care.

"It's a good thing to do and it probably can save some costs, but more importantly it really is an easy way to keep an awful lot of people in their homes, which is what I would want. I know it's what my mother wants," Bredesen said in an interview with Stateline.

Like every other state, Tennessee is bracing for an avalanche in demand for long-term care as the biggest generation in American history — 77 million so-called Baby Boomers born between 1946 and 1964 — begins to hit retirement age next year.

Occupying more than 30 percent of states' Medicaid bills, which in turn occupy more than 20 percent of overall state budgets, long-term care costs are growing faster than any other state expense.

That's partly because Americans are living longer. By 2020, the number of people aged 85 years and older — those most likely to need long-term care — will increase by more than 40 percent, according to U.S. Census Bureau estimates. Even without those demographic pressures, states' long-term care costs are daunting. The elderly and disabled represent about 25 percent of the total Medicaid population, but they account for more than 65 percent of the spending, according to the most recent federal data available.

It is well known that the vast majority of people with long-term care needs want to remain in their homes. And research shows that the cost of providing care in the community can be as little as one-third the amount of a comparable nursing home stay.

But the road to reforming state Medicaid plans is long and arduous. That's in large part because Medicaid — which pays nearly 50 percent of all nursing home bills in the country and 45 percent of all long-term care — is biased in favor of institutional care. When seniors qualify financially and are deemed to need care, Medicaid funding for a nursing home bed is guaranteed. For those who want to remain at home, funding is often only a possibility and a national shortage of home health providers can mean long delays.

Bredesen knows all this inside and out — he was once in the health insurance business himself — and he had no illusions about the difficulties of reforming the system. Before he tackled long-term care, though, he first had to stanch the state's hemorrhaging Medicaid program, TennCare — a move that made him a pariah in some parts of Tennessee and even brought him death threats as nearly 200,000 people were cut from the rolls in 2005. But he accomplished that.

Next, he needed an ally in the Legislature to make wide-ranging statutory changes in the way Medicaid finances long-term care. Democratic Sen. Lowe Finney became the champion Bredesen was looking for. Together they criss-crossed the state in 2007, talking to the elderly and disabled and their advocates. They negotiated with the state's powerful nursing home industry to ensure major private players would support the plan.

But the state's painful history of runaway costs that resulted from its bold Medicaid expansions in the mid-1990s and its worsening current fiscal condition meant Bredesen had to radically change long-term care financing without adding to the state deficit.

Betting on managed care In 2008, the Legislature unanimously approved a bill that would make Tennessee one of just a few states to contract out its long-term care program to managed health care organizations.  The federal government took a full year to approve it.

Like laws in Arizona and New Mexico, Tennessee's new law counts on private companies to ensure that a broad array of services — from so-called personal services such as meal preparation, bathing and dressing to home improvements, including wheel chair ramps and even pest control — are provided without additional cost.

Two months ago, TennCare CHOICES , opened its doors statewide with the goal of helping 11,000 people remain at home or return to their homes in the first year — all for the same amount the state paid in 2009. "The change is like night and day," says Wilo Clarke, a caseworker for a managed care company in central Tennessee where the program started as a pilot earlier this year. "More and more, people in the nursing facilities are hearing about this program. They want to do whatever it takes to go home."

Under the plan, low-income frail elders and adults with disabilities who are medically eligible for nursing home care may opt to receive the services they need in their homes, as long as the total cost is equal to or lower than the cost of a nursing home stay.

It's too early to tell whether CHOICES will accomplish its goals. But so far, more than 40 percent of some 3,300 new enrollees are opting either to move out of a nursing home or avoid going to one in the first place.  In addition to allowing Medicaid to pay for alternative services, Tennessee's CHOICES makes it easier for people to sign up for the program by providing a single point of entry — a caseworker with a local managed care organization.

For the managed care organizations, the financing structure is straightforward. The state gives them a flat monthly fee for each eligible long-term care recipient — whether in a nursing facility or living at home. Some patients will cost more and others will cost less. It's the company's job to ensure that the average cost for all enrollees does not exceed a specified level.

The risks of change

There are many success stories. A 56-year-old Nashville resident named Larry is a good example. He suffered a stroke two years ago and had an amputation. Because his wife could not care for him at home, he reluctantly entered a nursing facility. When the new program began providing training and support services for his wife, Larry was able to go home and spend time with his children and grandchildren.

Critics have argued that the managed care companies' financial incentives to keep people out of nursing homes could result in unsafe home care for people who really need round-the-clock nursing. But others say the companies have just as much incentive to avoid dangerous situations that could lead to expensive emergency care.

The AARP, which advocates for the elderly, says that three people can receive long-term care services in the community for the cost of serving just one person in a nursing facility. Still, the big fear in offering more home-based services is that people who never would consider entering a nursing home "will come out of the woodwork" and apply for Medicaid. Surveys have shown that for each patient in a nursing facility, two more with the same level of disability are making do at home.

Bredesen acknowledges the state's new program will result in Medicaid serving more people. But he says it's a good thing, as long as overall costs do not climb.

Although the social and fiscal benefits of public funding for home- and community-based services are clear, states have been slow to take the steps required to bring about change. In the mid-1990s, a few states began recognizing the value of serving more long-term care patients in their homes. Alaska, California, Minnesota, New Mexico, Oregon and Washington State now spend more than half of their long-term care dollars on alternatives to nursing facilities. Colorado, Idaho, North Carolina, Texas and Vermont are moving in the same direction. But Tennessee and 23 other states have made less progress, spending less than one-quarter of their long-term care budget on non-institutional care.

The new federal health care law — the Patient Protection and Affordable Care Act — has a chance of changing that. It includes financial incentives for states to spend at least 50 percent of their long-term care dollars on non-institutional services and offers a grant for every person who leaves a nursing home to receive services in the community. Still, experts say the federal dollars may not be enough to persuade some states to make the changes.

In Tennessee, both supporters and critics of the CHOICES program say only time will tell whether the managed care organizations will be able to keep a lid on costs. Bredesen says his greatest worry is keeping "fly-by-night" operators out of the system. "A lot of people can play. You don't have to be a doctor or build a hospital." But for those directly affected, Tennessee's experiment is already offering hope.

Lauren Lambert, former Pew Center on the States researcher, contributed to this article.