With their primary accounts showing the highest balances in years, state governments nationwide cut taxes, put some money in the bank and even lent a hand to local governments during fiscal year 2006, according to a report released Wednesday (Dec. 13).

"State finances were extremely strong; they were very stable and they're expected to continue strong into 2007," said Scott Pattison, executive director of the National Association of State Budget Officers (NASBO), which compiled the report with the National Governors Association (NGA). 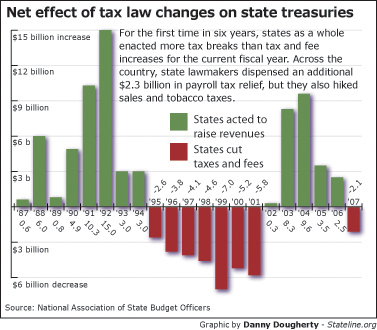 Spending from state general funds rose too, growing at 8.7 percent for fiscal 2006, compared with an average of 6.4 percent growth over the last 29 years.

According to the report, state spending is expected to increase by 7 percent for fiscal 2007, which ends June 30 for all but four states (Alabama, Michigan, New York and Texas).

General funds comprise the biggest portion of state budgets, accounting for 44 percent of state spending nationally. The funds are typically generated through broad-based taxes - such as income and sales taxes - instead of bond revenues, federal funds or fees with designated purposes.

The findings by NASBO and NGA dovetail with a Dec.7 report by the National Conference of State Legislatures (NCSL), which concluded that states were generally upbeat about their revenue outlook for fiscal 2007. The NCSL report, however, noted that the anticipated costs associated with health care, homeland security and other issues have reduced some states' positive outlook, compared with last year.

Ultimately, states are expected to have less money on hand on June 30 at the end of this fiscal year, compared with fiscal 2006.

Raymond C. Scheppach, NGA's executive director, said states are enjoying a rare "sweet spot" with money coming in to state coffers faster than expected and bills aren't piling up as fast as they normally do.

Spending on Medicaid, the federal-state venture that provides health insurance to the poor and accounts for 22 percent of all state spending, slowed down to 5 percent for fiscal 2006, according to the report. Medicaid spending increased 8.3 percent the year before.

But Scheppach said Medicaid spending will likely continue to grow, which is one of many reasons states predict that money will be a little tighter this year than for fiscal 2006.

One way NASBO and the NGA track how well states are doing financially is by keeping track of how many states make mid-year budget cuts.

Only Indiana and Louisiana had to mak 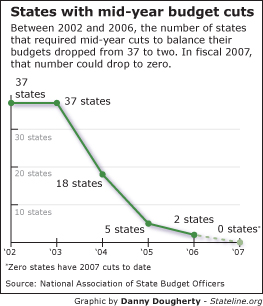 e mid-course adjustments in fiscal 2006. This year, no states are expected to take those steps. That's a far cry from 2002 and 2003, when 37 states cut spending in the middle of the year.

As the financial outlook brightens, some states are opting to cut taxes and fees.

On balance, states cut taxes and fees by $2.1 billion for the current fiscal year - the first time that tax cuts have outweighed increases nationwide since the economic boom of the late 1990s through 2001. They especially took aim at the income tax. All told, states reduced payroll taxes by $2.3 billion and corporate income taxes by $240 million.

Most of the income tax relief came from three states - Arizona, New York and Ohio, Pattison said. Ohio's new tax breaks were the largest. The Buckeye State is in the middle of a five-year effort to decrease its income tax by 21 percent. This endeavor and a new low-income tax credit will reduce Ohio revenues by $1.2 billion for fiscal 2007.

While states are collecting fewer taxes overall this year, sales and tobacco taxes are on the rise.

During this fiscal year, six states boosted their sales taxes, while 15 decreased them. All told, new laws will boost state sales tax revenues by $622 million.

Far and away the biggest reason for the net increase is New Jersey's decision to bring in $1.5 billion in new revenue from its sales tax. Freshman Gov. Jon Corzine (D) championed the larger tax as a way to shore up the state's finances, and his showdown with the Democratic-controlled Legislature led to an eight-day partial shutdown of state government in July.

On the other hand, North Carolina reduced its sales tax from 4.5 percent to 4.25 percent, saving shoppers $140 million. And New York permanently exempted clothing from the sales tax, leaving $608 million in customers' wallets.

States spent a total of $1.34 trillion in fiscal 2006, which includes money states receive from the federal government.