Nearly one American adult in three suffers from a mental disorder or substance abuse each year, but a patchwork of state and federal laws leaves many segments of the population without insurance to cover treatment.

Dissatisfied with a federal law that falls short of requiring all mental illnesses be covered the same as physical ailments, more states are compelling private insurers to provide mental health parity. 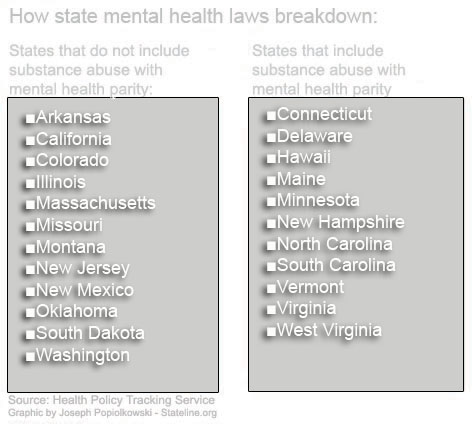 Washington last month became the 23rd state to pass a mental-health parity law (10 of these include substance abuse in their requirements as well), according to the Health Policy Tracking Service, a private, nonpartisan firm that tracks and analyzes state health legislation and policy trends.

The issue is on the front burner in statehouses in Iowa, Oregon and South Carolina, while the governors of both Nevada and New Jersey have made expanding mental health services a major priority.

State parity laws vary, but generally require private health insurers provide the same level of benefits for mental ailments as those provided for physical disorders and diseases. The coverage can include visit limits, deductibles, copayments and lifetime and annual limits. For example, an insurer that covers cancer treatments can't charge higher rates for schizophrenia treatment in states with mental health "parity" laws.

Several other states mandate coverage for mental health treatment but not necessarily at parity levels. Click here for a list and brief explanation of the various state parity measures from the National Conference of State Legislatures.

Whether they have a mental-health parity statute or not, states every day cover the cost of mental health coverage through Medicaid and other state mental health programs.

Medicaid, the federal-state health care program for the needy, is the largest single payer for mental health services in the country, outpacing all private insurers, Medicare and other state and local funding, according to figures released in late March by the U.S Department of Health and Human Services.

Medicaid paid nearly $27 billion of the $104 billion spent on all mental health and substance abuse treatment in 2001, or 26 percent of the total, according to HHS. That figure, the newest available, is expected to pick up even more over the next decade, according to Jeffrey A. Buck, associate director for organization and financing with HHS's Substance Abuse & Mental Health Administration.

Buck estimates that Medicaid funds more than half of all public mental health services administered by states and predicts that number could grow to two-thirds by 2017.

Private insurers shelled out a relatively small portion of the overall mental health and substance abuse spending provided nationwide in 2001, accounting for 22 percent of the total, about the same as level as a decade ago, according to HHS figures. Other state and local governments paid 26 percent.

Medicaid hasn't always been the No. 1 payer of mental health services. Twenty years ago, most people with mental illnesses were institutionalized and treated in state hospitals. States paid for the treatment with their own funds. But as people with mental illnesses were moved out of hospitals and into communities, states turned to the federal government to get a "match" in money through Medicaid to help pay for mental health services.

While states got more federal dollars, they also lost some control of how the money was allocated and spent for mental health. With Congress and the Bush administration now considering cutting Medicaid funds, states worry that they will have to scramble to make up the difference.

California is trying a different approach. Voters last November overwhelmingly approved a ballot initiative that is expected to raise $1 billion for mental health services by imposing a one percent tax on those who earn more than $1 million.

"Anyone interested in mental health is looking to see what California does," said Matt Rosenberg, an analyst with the Health Policy Tracking Service.

26 States Forced to Close Budget Gaps States Mull 'Do Not Spam' Lists
About Stateline
Stateline’s team of veteran journalists provides daily reporting and analysis on trends in state policy.
Learn More
Media Contact
Grace Powell-Harvey
Senior Associate, Communications
202.540.6804
Sign Up
Sign up for our daily update—original reporting on state policy, plus the day's five top reads from around the Web.