Ever wonder how much money your local school spends on education per student? Or how many students there are per teacher? Or how well the students score on standardized tests?

Or how about comparing all that information - per pupil spending, student teacher ratios, proficiency scores - side-by-side with neighboring schools, or even compare it with state-wide or national averages?

All this data and millions of other education snippets now are a mouse-click away for parents, educators and policy makers, thanks to an innovative Web site launched March 29 by the National Education Data Partnership, a collective of national education groups.

Created by Standard & Poor's School Evaluation Services, http://www.SchoolMatters.com contains the largest collection of public education data ever assembled - and it's free. It includes student achievement information, financial data and demographic breakdowns and allows users to compare this information with other states and the nation on several indicators, including national standardized tests, college entrance exams and teacher salaries.

Lawmakers can compare per-pupil spending school-by-school or state-by-state. Administrators can see teacher salaries or benefit plans in neighboring districts. And parents can see how many students with disabilities or English language learners attend their local school.

The wide-ranging statistics are just the beginning, said Tom Houlihan, executive director of the Council of Chief State School Officers (CCSSO), a participant in the project. The Web site also includes analytical tools intended to quantify the student-performance return that schools and districts get for the dollars they spend and the demographics they serve.

"There are no easy solutions to fix the more challenging aspects facing our (education) system," Houlihan said. "SchoolMatters will provide the kind of advanced analytical tool that education leaders need to help them make the very difficult decisions they face."

This information comes at a critical time, Houlihan said, to provide policy makers and educators with the tools and information they need to meet the ambitious education reform goals laid out by the states and President Bush's No Child Left Behind law.

School principals can use the site to find schools that have similar demographics but out-perform their own schools. From there, they can compare similar factors, such as dollars spent per student on instruction versus school administration. Or, they can contact a higher-performing school directly to seek advice on teaching curricula or professional development, and then create a plan to improve their own school, said Tom Vander Ark, executive director at the Bill & Melinda Gates Foundation, which helped fund the site.

"Users can learn about creative reforms throughout the country and consider whether similar efforts would benefit their local schools," Vander Ark said. The Gates Foundation and The Broad Foundation, two of the nation's largest philanthropy institutions focused on education reform, provided $45 million to fund the project for the next two years.

Schoolmatters.com expands on databases S&P designed for Michigan and Pennsylvania in 2001. The idea for a nationwide Web site grew out of the financial research firm's work for those states, and the National Education Data Partnership was created in 2004. The other partners are the Council of Chief State School Officers, Achieve Inc. and the CELT Corp.

CELT, a nonprofit that provides technology and other services to schools, and Achive, Inc., a nonprofit partnership between state governors and the business community, will offer assistance navigating the Web site to local and state policymakers.

Web site data is not intended to be used to rank or rate schools or states, said William Cox, managing director of Standard & Poor's School Evaluation Services. The information should be used to identify and fix problems that exist in America's schools, he said.

Despite increasing per-pupil spending by more than 75 percent in the past 25 years, Cox said, national achievement rates have remained flat. Additionally, fewer than 1 in 3 students demonstrate proficiency in reading or math on the National Assessment of Education Progress (NAEP) and only 68 percent of public high school students nationally will graduate, according to a report from the Urban Institute. For Latino and African American students, little over 50 percent finish high school.

It's uncertain what will happen when the two years are up and the $45 million runs out. By that time, several other financial sources - including state school systems - may find the database such an indispensable tool that they may help fund it, Cox said.

The data come from public sources, including state education departments, the U.S. Census Bureau and the National Center for Education Statistics. Currently, about 30 states have volunteered enough data to fully populate the Web site. It will be continuously updated as states report new data. 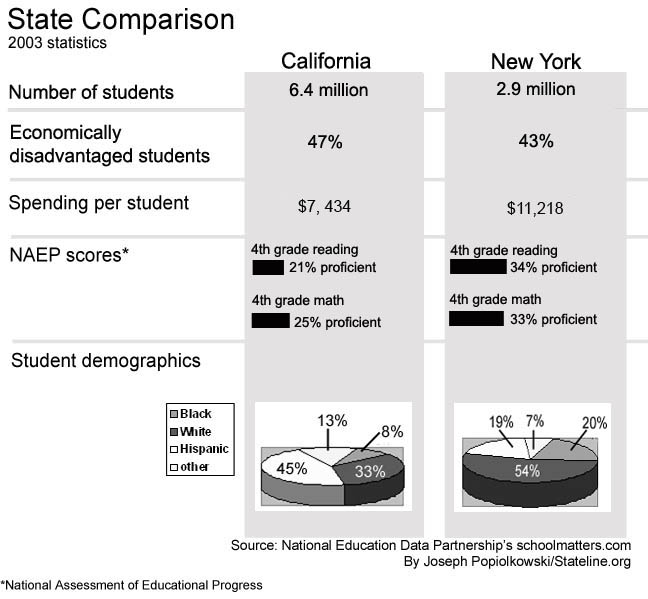