Colorado's 13-year-old experiment with writing strict tax and spending limits into its state Constitution is running into trouble at the same time its governor and anti-tax activists are trying to sell the idea to other states.

The groundbreaking Taxpayers' Bill of Rights written into Colorado's Constitution is putting the state in the strange position of facing a $234 million budget shortfall over the next two years - at the same time it must refund $345 million to state taxpayers.

The budget squeeze is pushing Colorado Gov. Bill Owens (R) and legislators to recommend softening the strict tax and budget rules dictated by what's commonly referred to as a TABOR amendment. But that snag hasn't stopped Owens from personally visiting Kansas and touting the merits of TABOR amendments to control government growth.

The measure - promoted by several nationwide anti-tax groups, namely the Americans for Prosperity Foundation --  is introduced for consideration in 16 states, with the best chances for passage in Arizona, California, Kansas, Missouri, Ohio, Oregon and Wisconsin.

For the first time this year, TABOR is forcing the state to reduce spending at the same time that it is refunding revenue to taxpayers - a counter-intuitive predicament largely resulting from the national economic crash that followed the Sept. 11, 2001, terrorist attacks and that led to the worst budget crises in the 50 states since World War II. 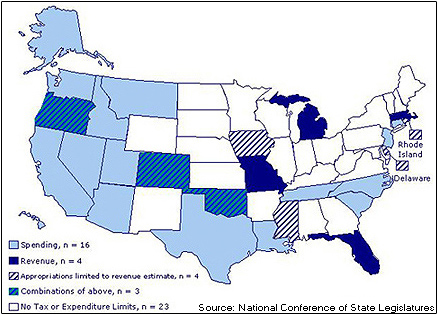 Fallout from the economic decline included a 16 percent drop in state revenues in Colorado from 2001 to 2003, resetting the base from which TABOR's refund mechanism is triggered so low that some question whether the state can ever dig itself out of the hole.

Budget experts predict $1 billion will be funneled back to Colorado taxpayers between fiscal 2005 and fiscal 2008.

"It amounts to an annual tax cut," said Brad Young, a former Republican member of the Colorado House who chaired the Legislature's Joint Budget Committee. "Taxes are never low enough. ... The next step is you have to go to a vote of the people and ask to regain some of the money."

Owens, an ardent TABOR supporter, and state legislators already have begun floating proposals this year to relax the limits TABOR sets on revenue and to constrain the spending increases for education mandated by a separate constitutional amendment passed in 2000 that requires annual increases in state spending for K-12 education, the largest chunk of the state budget.

The Colorado House of Representatives has passed a proposal that would suspend TABOR refunds for 10 years in exchange for a slight decrease in the state income tax rate. The plan now goes to the state Senate for consideration. Even the business community, which originally supported the revenue limits, has come out in favor of a TABOR fix.

Legislators in 16 other states, meanwhile, are considering amending their state constitutions to also cap revenue growth at the rate of population growth plus inflation, according to the Center on Budget and Policy Priorities, a Washington, D.C., group that focuses on policies that affect the poor.

Twenty-seven states already place some sort of ceiling on revenue or spending, according to the National Conference of State Legislatures.

TABOR supporters, including Colorado's governor, claim that the measure has succeeded in limiting the growth of government and preventing tax increases. Without TABOR, Colorado state government would have grown much more during the economic boom of the 1990s -- as happened in many other states - and it would have been much more difficult for the state to cope with the economic downturn that began in 2001.

TABOR triggered the return of about $2.8 billion to state taxpayers from 1997 to 2001 -- refunds that have been hailed by the measure's supporters.

Opponents of TABOR say that political and market forces serve as an adequate check on state governments' growth and that formulaic limits that fail to account for economic fluctuations, rising health care costs and other demands paralyze future state lawmakers.

"Each legislature faces different problems and ought to be able to make judgments as to how to deal with those problems," said Iris Lav, deputy director of the Center on Budget and Policy Priorities.

Because K-12 education and Medicaid, the state-federal health care program for 53 million poor and disabled Americans, make up two-thirds of Colorado's budget, state officials are extremely constrained as to where they can make cuts.

Young predicts that a growing number of constitutional amendments will be introduced in Colorado to protect various state programs, in addition to K-12 education, as special interests clamor to secure the remaining slivers of the funding pie.

"It leads to direct democracy over the budget," he said.