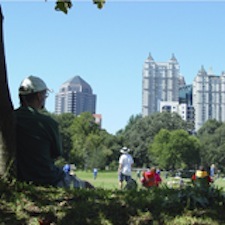 Atlanta is notorious for its traffic—sometimes called the worst in the southeast United States. Local officials saw creating a more pedestrian-friendly urban area and a light-rail system as part of the solution to the region’s jammed roadways.

Known as the Atlanta BeltLine, the project will create a light-rail system and major redevelopment along a corridor of abandoned railways encircling the city’s core. The officials involved also see this as an opportunity to incorporate multi-use trails, parks and affordable housing.

To better understand how the project would affect Atlanta communities and to help protect the health of the 200,000 people living within the area, local planners evaluated the project via one of the United States’ first HIAs.

Led by Professor Catherine Ross at the Georgia Institute of Technology, the HIA provided new information on how the BeltLine proposal might affect neighboring communities and, most important, provided practical recommendations for enhancements that would maximize the health benefits of the project.

Used as a reference by community members and decision makers, the HIA report determined that the project would have a largely favorable impact on community health, through improving the availability of green spaces and healthy food, creating opportunities for physical activity, reconnecting people and places previously separated by the rail corridor and increasing transportation options. The HIA revealed how developers could strategically place parks, residential areas, schools, transit routes and grocery stores to increase residents’ health and decrease potential health problems.

As a result of the HIA, the BeltLine board of directors and an environmental task force now include health experts, construction of green space is a top priority and project and funding decisions will take health into account. New partnerships between community groups, health experts and government agencies are helping ensure that project plans continue to take into account health-related concerns. Acknowledging the HIA’s overarching conclusion that the Beltline project would offer important health benefits for Atlanta residents, the U.S. Environmental Protection Agency (EPA) awarded a $1 million dollar grant to clean up abandoned industrial sites along the corridor, and speed the development process.

This HIA demonstrates that when decision makers at all levels understand the health implications of a project, more effective policies can be advanced that improve health and help project dollars go further.