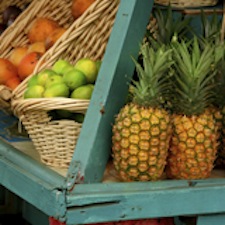 Hawai‘i County was working on a new agricultural plan. Its purpose was to revitalize agriculture as a basis for economic development through serving as a guide for county government, local advocacy groups, and local businesses. The Kohala Center received a grant from the Health Impact Project to conduct an HIA to inform the plan.

Hawai‘i Island is the largest of the Hawaiian Islands. Despite abundant fertile lands and a 12-month growing season, the island imports about 85 percent of its food.

There were several existing conditions that could be affected by the agricultural plan:

The HIA found several potential health benefits of the agricultural plan, and included recommendations to maximize health benefits in implementing the policies and reaching the goals articulated in the Hawai‘i County Agriculture Development Plan, including ways to make it easier for schools to buy more local produce, tactics to increase the amount of food grown for the local market, and suggestions to increase home, school, and community gardening.

Kohala Center staff members had an opportunity to meet with County of Hawai‘i Planning Department staff members during the strategy development period and made additional specific suggestions during the draft review period. All of the key issues and most of the HIA recommendations were included in the final state strategy documents, with dollar figures attached to some of the recommended initiatives. Also, the statewide Hawai‘i School Food Authority’s school food services director at the Department of Education has added staff members to assist in developing ways to more successfully source local food.