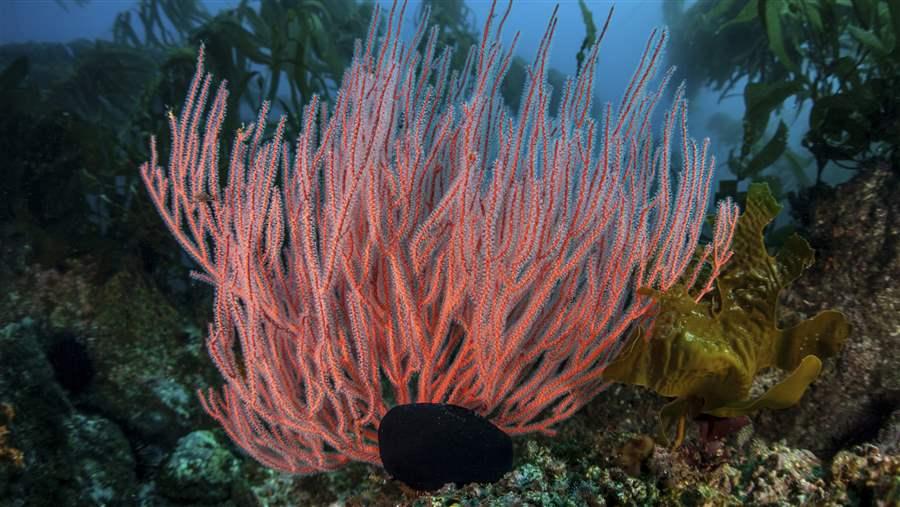 Approximately 140,000 square miles of sensitive West Coast ocean habitat is now protected thanks to years of effort by scientists, fishermen, and conservation organizations. In a landmark decision, the Pacific Fishery Management Council (PFMC) in early April voted to close an area roughly twice the size of Washington state to bottom trawling. Nearly 90 percent of this will also be closed to any bottom-contact fishing gear.

This precautionary measure prevents large trawling nets from damaging approximately 16,000 square miles of sensitive corals, sponges, and rocky reefs in a region known as the Southern California Bight, as well as many other areas off of central and northern California, Oregon, and Washington. Overall, this is a significant increase in the amount of near-shore essential fish habitat protected along the West Coast.

The council also closed 124,000 square miles of deep-sea habitat off the coast of California to bottom-contact fishing gear. Scientists are only now beginning to understand these areas, which are so far below the surface that they are never illuminated by sunlight.

Another key part of the council vote is the recognition of methane seeps—and the marine life they support—as important fish habitat. This is the world’s first incorporation of seeps in a fish management plan. The seeps, which are areas where methane bubbles up from the seafloor, create deep-sea communities that convert greenhouse gases into calcium carbonate rock, providing places for corals and sponges to anchor and shelter breeding areas for fish. This designation should set a precedent for safeguarding methane seeps elsewhere.

During the past five years, conservation groups, including The Pew Charitable Trusts, conducted hundreds of hours of research, mapped critical habitat, and worked with scientists, fishery managers, the fishing industry, and the PFMC and its staff to make the case for these important measures. As public awareness of the scientific data increased, tens of thousands sent the council letters supporting the protections.

It’s important to note that the PFMC’s decision also reopened hundreds of square miles to commercial fishing—areas where depleted stocks have recovered and the science showed that bottom trawling wouldn’t harm sensitive habitat. This is a win for all who care about and work toward a healthy ocean and sustainable fisheries.

Paul Shively directs The Pew Charitable Trusts’ work on ocean conservation in the Pacific. Tom Rudolph is an officer with the team.