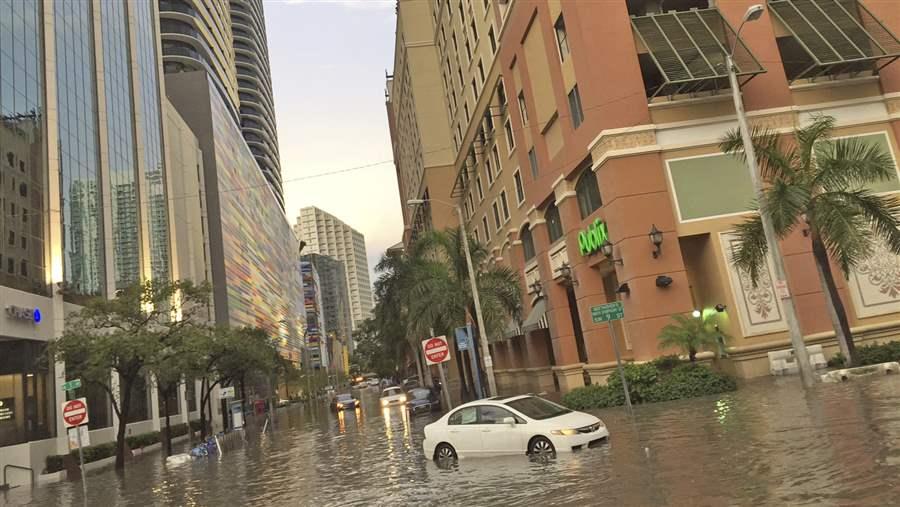 From the recent flooding in the Midwest and the March nor’easter along the mid-Atlantic coast to the 2017 hurricanes and this winter’s record deluges in California, major floods have become all too common across the U.S.

That’s one reason more than 250 governors, state representatives, and mayors from across the political spectrum and representing more than 45 million Americans are calling on the federal government to ensure that our country’s infrastructure can withstand flooding—which in turn would limit damage, reduce the need to rebuild after floods, and save taxpayer dollars.

Elected leaders from coastal communities, including Galveston, Texas, and Charleston, S.C., and inland ones from Milwaukee to Oklahoma City signed the Flood-Ready Infrastructure Statement of Principles, led by Pew, which encourages the federal government to:

The statement was unveiled March 14 at an event hosted by The Pew Charitable Trusts and the National League of Cities at the U.S. Capitol Visitor Center in Washington.

In September 2013, his city received an average year’s worth of rain in one week. But because Aurora had invested in parks and open recreation space that can absorb millions of gallons of floodwater and runoff, the city’s infrastructure and property were spared what could have been extensive and costly damage.

Others who signed struck a similar note. Baton Rouge Mayor-President Sharon Weston Broome shared that her city is taking a data-driven approach. Last year, the parish launched its first-ever comprehensive stormwater master plan, which is designed to trigger policy updates and help communities develop in a more resilient manner.

“Floods, like the two major floods that struck Louisiana in 2016, do not care if you are a Republican or Democrat,” she said. “That is why I joined hundreds of other elected officials from states across the country in support of addressing this critical issue.”

Last year, the nation’s infrastructure received a grade of D-plus from the American Society of Civil Engineers. Years of neglect and underinvesting have left key assets, including schools, hospitals, roads and bridges, dangerously close to failing. That, coupled with the increasing frequency and cost of flood disasters, means our nation’s infrastructure is approaching a critical threshold of risk.

In upgrading and replacing our nation’s aging infrastructure, the federal government must invest only in projects that will withstand flooding. Doing so would not only save taxpayer dollars, but would also show that our national leaders are listening to state and local officials, and the tens of millions of people they represent across the country.

The full list of the statement’s signers can be viewed here.