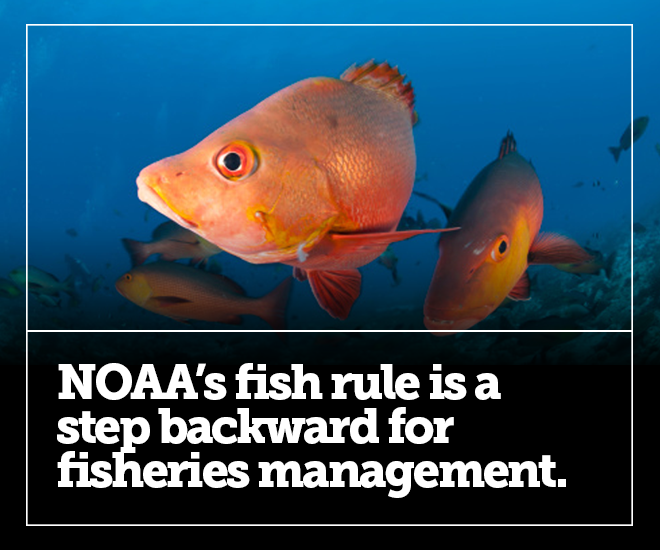 Protecting U.S. fisheries from overfishing, and restoring populations of fish that are at unsustainably low levels, just got a little tougher.  On Oct. 13, the National Oceanic and Atmospheric Administration’s Fisheries Service (NOAA Fisheries) announced a final version of guidelines to implement National Standard 1, which directs fisheries managers to prevent overfishing while attaining the greatest economic, ecological, and social benefits for the nation. National Standard 1 is the most important of the 10 standards that guide fisheries managers’ implementation of the nation’s primary fishing law, the Magnuson-Stevens Act. The Pew Charitable Trusts has been monitoring the proposed revisions of this rule since NOAA Fisheries announced it would begin updating it more than four years ago.

The final rule contains several critical deficiencies that we cited in our comments on the agency’s 2015 proposal to revise the guidelines, and is a step backward for fisheries management. It signals a retreat from important progress over the past decade to improve the health of fish populations and benefit individuals who rely on well-managed fisheries, including fishermen, chefs, and coastal business owners.

Here are some ways in which the new rule weakens fisheries management:

The final rule does contain some improvements over the proposed version that reflect our comments to NOAA in June 2015 as well as similar concerns voiced by more than 100,000 organizations and individuals. These include:

As regional fishery management councils move to use the final guidelines to determine measures to prevent overfishing and restore diminished fish populations to healthy levels, Pew will continue to work at the council level and in Congress to discourage risky fisheries management that undermines U.S. fish conservation.

A lot is at stake: Even though NOAA recently reported that the level of overfishing in the U.S. has reached historic lows and that 40 populations have been rebuilt since 2000, 38 populations remain at unsustainably low levels and 29 are still subject to overfishing, as this NOAA map shows.

That's why more councils need to take a big-picture approach to managing and conserving ocean fish—one that accounts for stressors such as habitat destruction, pollution, and climate change—to safeguard the health of our ocean resources.

After all, building and maintaining healthy ocean ecosystems and productive fish populations, and more sustainable coastal communities, will lead to a brighter future for our nation’s fish and fishermen—and for all Americans.