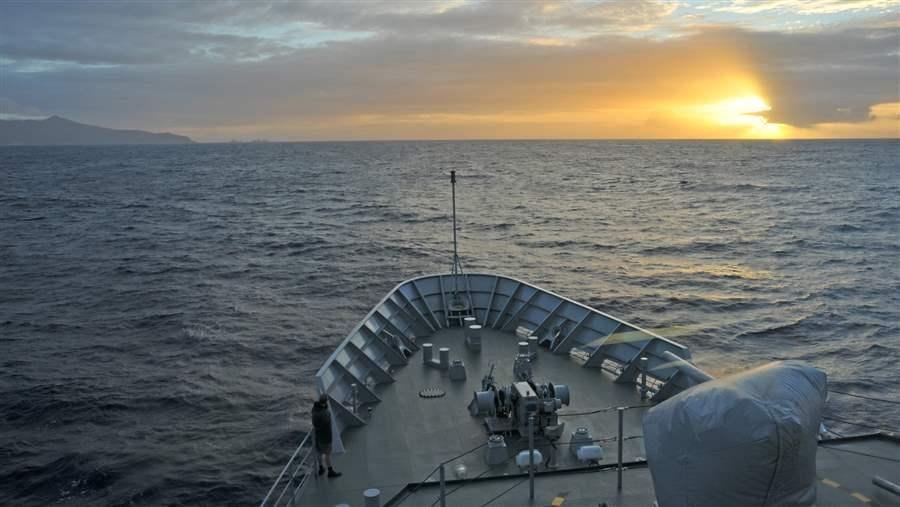 In May 2011, a group of leading artists from the South Pacific region traveled on HMNZS Otago to a place rarely explored – the seas around the Kermadec Islands.

In February, New Zealand’s minister for arts, culture and heritage helped open “Kermadec: Lines in the Ocean,” a traveling art exhibition celebrating the riches of the region’s waters, at the Forrester Gallery in the town of Oamaru.

Hon. Maggie Barry, who also serves as minister of conservation for New Zealand, spoke about the efforts undertaken by nine artists to craft works that emphasize the value of protecting the ocean surrounding the Kermadec islands, which sit northeast of North Island.

The artists traveled to the Kermadecs in 2011 at the invitation of The Pew Charitable Trusts to explore the region’s beauty, mystery and biological significance. Their works, comprising a range of art forms, have helped bring attention to the importance of conserving this area for its unique geography and biodiversity, as well as its cultural heritage. That heritage is reflected in New Zealand’s Maori name, Aotearoa.

"It will be one of the largest and most important fully protected areas in the world," Barry remarked at the exhibition opening. She said she hopes that the Kermadecs Ocean Sanctuary will become a UNESCO World Heritage site, a designation that would help validate the region’s biological and cultural significance on a global scale.

On display are works by Dame Robin White, John Pule, Elizabeth Thomson, Gregory O’Brien, Bruce Foster, Phil Dadson, John Reynolds, Jason O’Hara and Fiona Hall. Barry said she was in awe of the various techniques and styles used to convey impressions of the same journey to a largely untouched place.

"The artists, chosen for their Pacific connections, are among New Zealand's leading creatives,’’ Barry said. “It must have been quite a daunting prospect for the group to travel by sea, let alone to a remote set of small uninhabited islands in the middle of the Pacific Ocean, when they set off five years ago."

Through their works, the artists portray the links between Pacific cultures and marine wildlife, helping to make the case for creating large marine reserves to protect the ocean.

Last year, the art traveled to New Caledonia, a French territory in the South Pacific that is working to implement plans for a large marine reserve in its waters. In July 2012, the artworks were shown on Chile’s Easter Island. The waters around that island will soon be protected by a 631,000-square-kilometer marine park proposed by its indigenous Rapa Nui community and announced last October by Chilean President Michelle Bachelet.

The show at the Forrester Gallery runs through May 9. The New Zealand government has committed to having the Kermadec Ocean Sanctuary in place by Nov. 1. Legislation to officially create the park is expected in the coming weeks.