California’s Central Coast harbors an array of ecosystems, including grassland, semidesert, and redwood forest, diverse landscapes that are home to a stunning variety of plants and animals. The Los Padres National Forest—the second-largest in the state—extends nearly 220 miles, rising from the Pacific Ocean to over 8,800 feet in elevation. It is inhabited by 1,200 plant species and approximately 468 species of fish and wildlife. More than 90 of these are at risk of extinction, including the San Joaquin kit fox, steelhead trout, arroyo toad, spotted owl, and California condor.

The Carrizo Plain National Monument, established in 2001, is traversed by the San Andreas Fault and made up of ridges, ravines, and ponds that are normally dry; this area contains the last intact native grassland where pronghorn antelope and tule elk roam free. 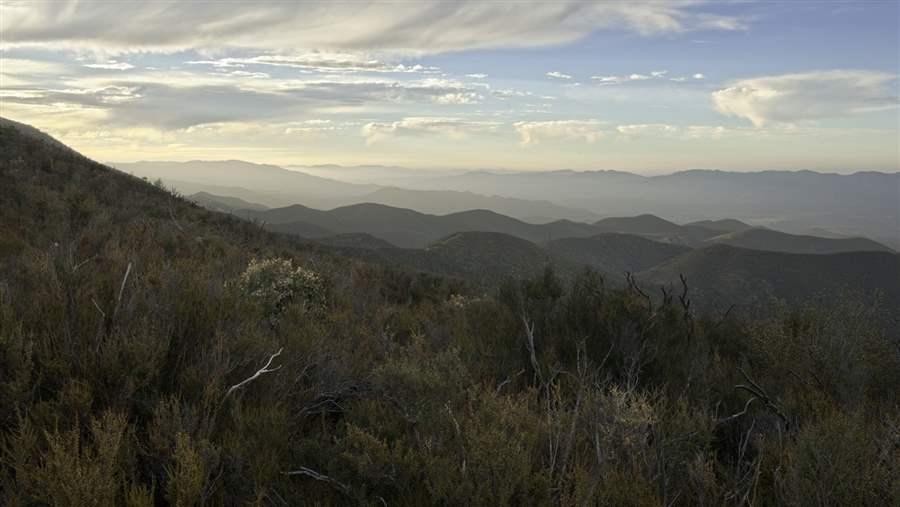 Among the many outstanding areas proposed for long-term protection in the legislation is an expansion of the Matilija Wilderness in Ventura County—40,000 acres on three nearby sites that are dominated by steep chaparral slopes, boulder-strewn creeks, dense oak woodlands, and expansive grasslands. The Dry Lakes Ridge Botanical Area provides habitat for unique plant life, such as California ground cone and a species of dogbane found nowhere else in the region. This diverse and wild landscape supports 16 sensitive plant and animal species, including the arroyo toad, California condor, California red-legged frog, and the hoary bat, among others. Lucky visitors may also observe black bears, deer, coyotes, bobcats, mountain lions, rattlesnakes, hawks, and eagles.

Flowing through the wilderness is the proposed Matilija Creek Wild and Scenic River. Virtually the entire upper watershed of the creek lies within the existing wilderness area. The waterway supports resident trout that descended from steelhead once able to reach the upper watershed. Sixty years ago, more than 5,000 steelhead migrated each year up the Ventura River from the Pacific Ocean to spawn in the cool waters of Matilija Creek. Now fewer than 100 make it to the creek, only to be blocked by the Matilija Dam. Biologists consider the watershed the best remaining steelhead habitat in the Ventura River system. They hope that with the removal of the Matilija Dam in the lower watershed, steelhead will once again spawn in Matilija Creek’s pristine waters.

Matilija Creek and its north fork are part of the reason people are drawn to the area for outdoor activities. The distinctive setting provides outstanding opportunities for hiking, backpacking, swimming, wading, fishing, photography, and viewing wildlife. Two large waterfalls on the main stem are a popular destination for day hikers.

The Central Coast Heritage Protection Act will help ensure that these special places are protected so future generations can experience seeing a California condor soaring overhead and can wade into the immaculate Matilija creek.