The Arctic Ocean is home to spectacular wildlife found nowhere else in the United States. Beluga, bowhead, and gray whales; walruses; polar bears; and ice seals, as well as millions of migratory seabirds, shorebirds, and waterfowl use this unique marine ecosystem for migration, feeding, resting, and breeding. Although wildlife is found throughout the Beaufort and Chukchi seas, distinct physical or oceanographic features in some areas create especially rich productivity, biodiversity, and resilience. 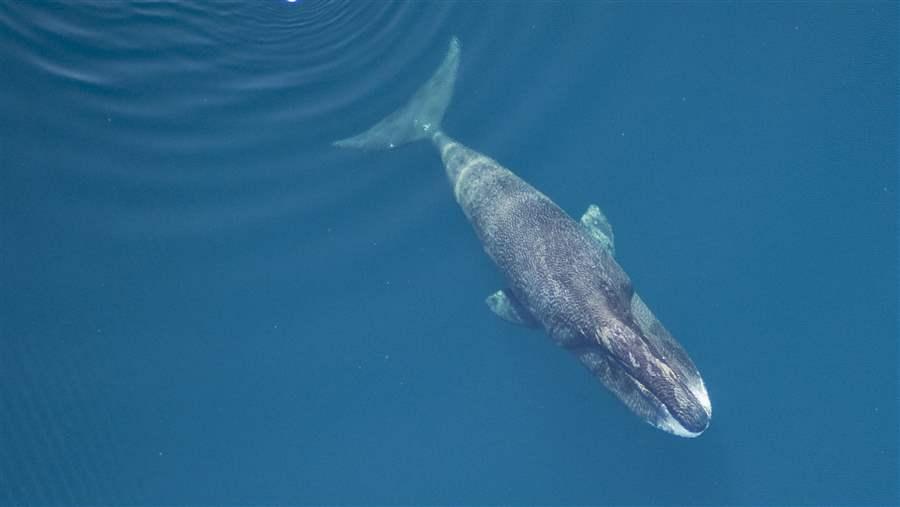 A bowhead whale in the Arctic Ocean. Bowheads are incredibly long-lived whales that have been an important part of a subsistence culture and way of life for Arctic communities for thousands of years.

These areas support high concentrations of the plants and animals that form the base of the food chain, attracting higher-level predators such as marine mammals. The abundant wildlife in and around the Chukchi Corridor, Hanna Shoal Area, Barrow Canyon, and the Barrow and Kaktovik Whaling Areas provide subsistence opportunities and are culturally significant to the Inupiat people in coastal communities, who have lived on the bounty of the ocean for many centuries. These areas have long been recognized both within and outside of Alaska as important for wildlife and for subsistence whaling.

Today’s announcement recognizes that these areas face interrelated threats. The Arctic is warming at two to three times the rate of the rest of the planet, and the impacts of climate change, including loss of sea ice and ocean acidification, disproportionately affect this region. The loss of sea ice enables the expansion of oil and gas development, shipping, and other industrial activities, which increase noise, air, and water pollution.

The Pew Charitable Trusts does not oppose offshore drilling but believes a balance must be struck between responsible energy development and protection of the environment. As part of a long-term plan for multiple uses of the Arctic Ocean, protecting especially important areas can help maintain the resilience and health of the larger Arctic marine ecosystem and provide a more certain future for communities, hunters, and industry.

Learn more about why these areas are so important:

The Chukchi Corridor, in the Chukchi Sea, follows the shallow continental shelf from Point Hope to Barrow. This band of ocean is important for marine life and is driven by sea ice leads, large fractures within the ice, which provide openings critical to wildlife. During spring and early summer, bowhead whales, beluga whales, gray whales, ice seals, waterfowl, gulls, seabirds, and other wildlife use the corridor as an essential pathway to move north from the Bering Sea to the Arctic Ocean, making it one of the world’s largest marine mammal migrations. Recurring sea ice leads are also critical from winter through early summer for resident animals, such as bearded and ringed seals and polar bears. And after the ice retreats in the summer, Pacific walruses move through the corridor to the shore at Point Lay, where they haul out en masse.

Hanna Shoal, in waters about 100 miles northwest of the northernmost tip of Alaska, rises from the surrounding seafloor to about 65 feet below the surface. About 30 miles wide, the shoal traps and anchors winter sea ice. The shallow shelf diverts warm water flowing from the Bering Strait farther north, allowing sea ice floes to its south to endure longer into the summer. Polynyas, or persistent areas of open water, are found between Hanna Shoal and the coast of Alaska and are important for marine life in winter and spring. Walruses and bearded seals feed on the many seafloor animals on Hanna Shoal, and recent satellite-tracking data demonstrate the shoal’s importance for walrus foraging and resting, especially during summer. Other species that migrate through or are found on Hanna Shoal include ringed and ribbon seals, polar bears, and beluga and bowhead whales.

Just offshore from Barrow, Alaska, Barrow Canyon lies at the northwestern tip of North America at the juncture between the Chukchi and Beaufort seas. This submarine canyon is about 150 miles long and 15 miles across and descends approximately 1,200 feet below the surrounding seafloor. In Barrow Canyon, nutrient-rich waters flowing east from the narrow Bering Strait through the Chukchi Sea meet the westward current from the Beaufort Sea. The waters around the canyon are extremely productive compared with adjacent areas and with the nutrient-poor deep waters of the Canada Basin.

The canyon’s dynamic waters, together with the area’s abundant spring sunshine, fuel a remarkable population of tiny organisms—plants and animals—that form the foundation of the food chain. The floating plankton, as well as crustaceans and other bottom-dwelling organisms, draw a wide variety of predators, including gray whales that feed here each summer and fall and bearded and ringed seals each spring and winter. Seabirds and waterfowl use Barrow Canyon as a critical passageway for migrating, and high densities of murres, shearwaters, eiders, and loons can be found around the canyon, along with Arctic cod and other fish.

The Barrow Subsistence Area is located on the Beaufort Sea side of the Barrow Canyon. In the spring and fall, it is part of the migratory corridor for bowheads, and it is becoming an important feeding area for these whales during ice-free seasons as well. The area is also critical to subsistence hunting for the Inupiaq village of Barrow.

The Kaktovik Subsistence Area is located in the eastern Beaufort Sea, near the border with Canada. This area is part of the fall migratory corridor for bowhead whales from the Beaufort to Bering seas. The area lies in an important bowhead feeding and resting spot and has been a critical subsistence hunting area for the Inupiaq village of Kaktovik for thousands of years. The area lies west of the Mackenzie Delta and is second only to Barrow Canyon as a high-productivity region in the Beaufort Sea.