RAPA ITI ISLAND, French Polynesia—Our dives in the waters here have already produced results that raise the kind of questions we had hoped would come with this journey.

Our expedition set sail from New Zealand last month to explore marine biodiversity in French Polynesia’s Austral and Gambier islands and better understand how it compares to other areas in the South Pacific, such as the Kermadec Islands off New Zealand.

Among the plants and animals we observed in our 12 dives at three locations here and one at Marotiri were three species of octopus. Previous expeditions have recorded only one kind of cephalopod (octopus) in this area. We suspect one of the octopuses could be Octopus oliveri. Based on its appearance and general behavior, it resembles a species found in the Kermadecs’ waters. 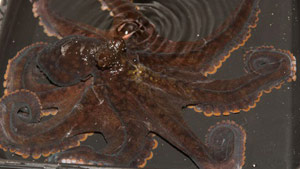 This animal, collected in the intertidal zone close to shore, has tentatively been identified as Octopus oliveri.

Previously, O. oliveri had been documented only in Hawaii, Japan, and the Kermadecs and had not been recorded in French Polynesia. So, if the octopus we collected is the same species, then this is an exciting find and highlights one of the motivations for this expedition: to better understand the great connectivity among the different islands of the South Pacific.

We found many macro mollusks (shells), though most of what we collected has been from only a few species. We have not seen the high level of diversity among these mollusks that is often seen on coral reefs.

The fish team has collected over 150 species, some of which we have not been able to fully identify. Once experts have had a chance to look at the samples, we will have a better idea of all the species we have found.

In our dives here, we have noticed an absence of feather stars (crinoids), marine invertebrates with feathery fringes typically found on tropical coral reefs. We did, however, find some on our dive at Marotiri. 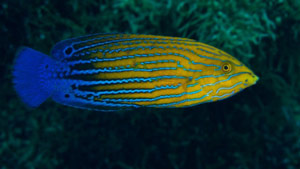 This fish is called the feminine wrasse because the female’s color morph is more beautiful than the male's, an unusual animal trait.

The biggest challenge we face is that we have spent only a short time sampling at each site. We have just scratched the surface of the life there to discover.

We will know a lot more about what we have collected after we get the samples back to the laboratory for further examination.