John Muir described the San Gabriel Mountains bordering the foothill communities north of Los Angeles as a place where “Mother Nature is most ruggedly, thornily savage.” He famously wrote of an 1877 hike through the dry channel of a tributary where “the chaparral closed over from bank to bank, so that (he) was compelled to creep more than a mile on hands and knees.”

In Muir's time, the San Gabriels had already seen heavy use for resource extraction, especially for gold and timber. But Muir and Abbot Kinney, the state's first forester, recognized the natural value that would increase in time, and urged conservation. In 1892, President Benjamin Harrison proclaimed the area to be the San Gabriel Timberland Reserve—the second such reserve in the country after Yellowstone—a designation that applied conservation principles to the ongoing commercial use of the forest. 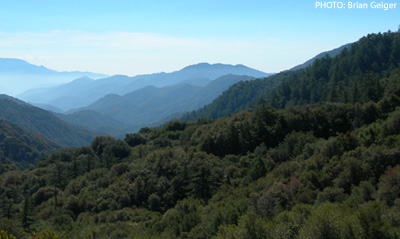 They are an important source of clean water for the Los Angeles region, providing for more than three million people, about one-third the population of Los Angeles County. Even more count on the mountains for benefits that are less tangible but equally important—a place to enjoy the outdoors while escaping the noise, traffic, and pollution of the city.

The San Gabriels are at the heart of a recreation-oriented vision of land management for the area that connects the mountains to the city's urban population through a broad national recreation area anchored by protection of additional wilderness stretches and wild and scenic rivers. They are very rugged in places, so hikers, climbers, and bikers can find plenty of challenges. But in the mountains can also be found more temperate landscapes for the many walkers, anglers, picnickers, and other day trippers looking to enjoy a more easy-going outing.

Supporters of the plan to expand the amount of protected lands in the San Gabriel area represent the diversity of modern California and include immigrants and their descendants living in the heart of Los Angeles who enjoy the clean air, natural landscape, and open space waiting just a few miles away from home.


Even “in the very heart of this thorny wilderness,” Muir wrote of finding during a hike in the San Gabriels “gardens filled with the fairest flowers, that any child would love,” and a diversity of wildlife “adding wildness to wildness in glorious profusion and variety.” The Pew Charitable Trusts is continuing to work with this local coalition to expand protection of the San Gabriel Mountains—both rugged and sublime—for generations to come.